After a Washington state town burnt down, a resident opens her donated home to neighbors

This article first appeared in the Spokesman Review on April 8, 2021. By Emma Epperly.

Community drew Diana Totten to Malden — the way everyone waves to each other as they drive down the Whitman County street, how kids can safely ride their bikes around town and the willingness of others to offer a helping hand.

“They’re our neighbors and everything, but they’re more like family,” Totten said. “Everybody’s so close, like one big circle.”

And that was before last summer, when wildfire roared through the small town southwest of Spokane. Totten has now been gifted a brand new home and has the chance to return such kindness to help her neighbors.

Diana Totten holds up one of the gifts from the religious community that built a new home for her and her daughter in Malden, Whitman County. The house was completed by members of an Anabaptist community from Montana. (Jesse Tinsley / The Spokesman-Review)

Totten moved to Malden 10 years ago from Spokane to help her mother, Gisle Merriman, after she had a heart attack and quadruple bypass surgery.

At the time, Totten had four children and decided to make Malden the family’s permanent home. She bought a house in the center of town. The home was built in 1909 and had survived the fire of 1910.

“We liked it out here. What a cute little town,” Totten said of the decision to stay in Malden.

An avid gardener, Totten had thousands of plants in her garden, but the house was old and needed a lot of work, including a new roof and gutters. With her three oldest boys moved out, Totten and her 12-year-old daughter Briaunna were fixing up the home in the summer of 2020.

Totten was unable to afford insurance until the roof was replaced, something she had hoped to do herself.

“I was working on it, and I was not fast enough,” Totten said.

On Labor Day weekend, Totten and her daughter returned home late from a trip and planned to sleep in.

Then midday, the wind woke Totten up, she said. She checked to see what was going on and saw there was a fire near Rosalia, a town less then 5 miles away. But fires on the Palouse are common, so Totten said she didn’t worry.

That quickly changed when Totten realized the wind was blowing the opposite direction to what is normal that time of year, she said.

Not long after, Totten’s neighbor told them it was time to evacuate.

“I thought we’d be back. We’ve had fires out here before,” Totten said. “By the time we got to Spokane, the house was gone.” 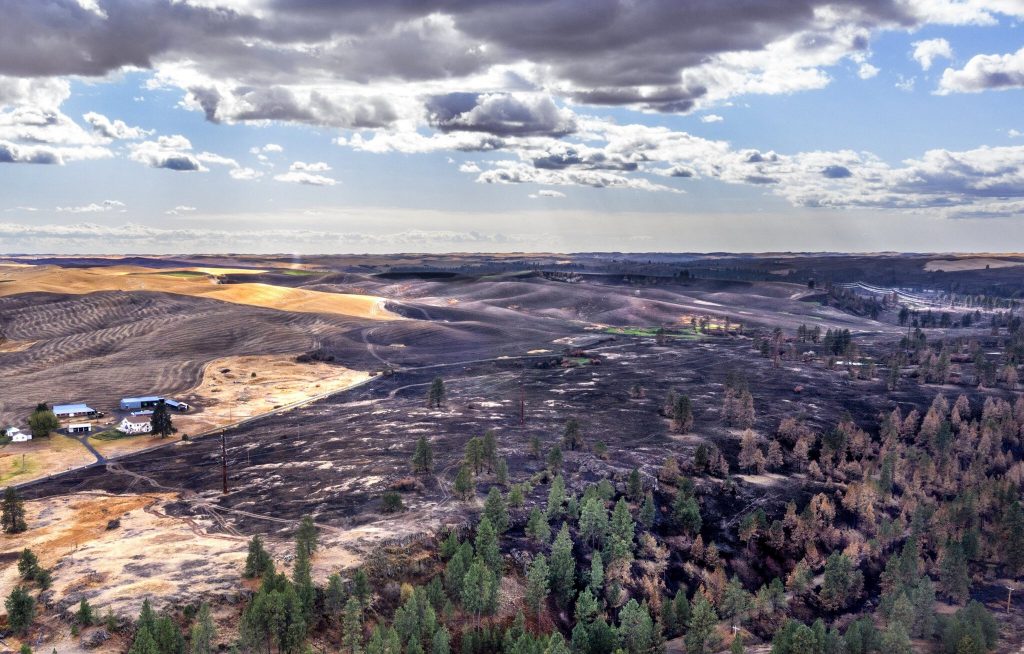 The incinerated town of Malden, Whitman County, is seen Oct. 12. The fire that burned through the town started miles away on a… (Steve Ringman / The Seattle Times)

About 80% of Malden and nearby Pine City residents lost their homes to fire that day. About 40% were uninsured. Townspeople quickly formed the Pine Creek Community Long Term Recovery group that has worked with nonprofits and the federal and state governments to start the rebuilding process.

For Totten, the next few weeks were a whirlwind of unknowns, especially without insurance. She stayed at her sister’s house in Spokane and began planning how she was going to clean up her own property.

Not only had Totten’s house burned down, but so had three sheds on her parents’ property. Her parents had recently sold their home and moved to be closer to Totten’s brother but had kept part of their property with the sheds.

At first, Totten attempted to clean up the property herself, but she became ill and had to be treated for smoke inhalation. Then came word that Washington state would help pay for the cleanup.

With all of this happening, Totten quit her job building windows to focus on rebuilding. Then came a call from Hank Cramer with the state’s Emergency Management agency asking Totten to come meet with a group called Western Anabaptist Mission Services.

The group, based in St. Ignatius, Montana, works with Christian Aid Ministries to help in the aftermath of natural disasters. The Anabaptist group helps build homes for those in need and shares some of the administrative burden with the Christian aid group.