After the fire, Malden’s food bank has become the unofficial town center 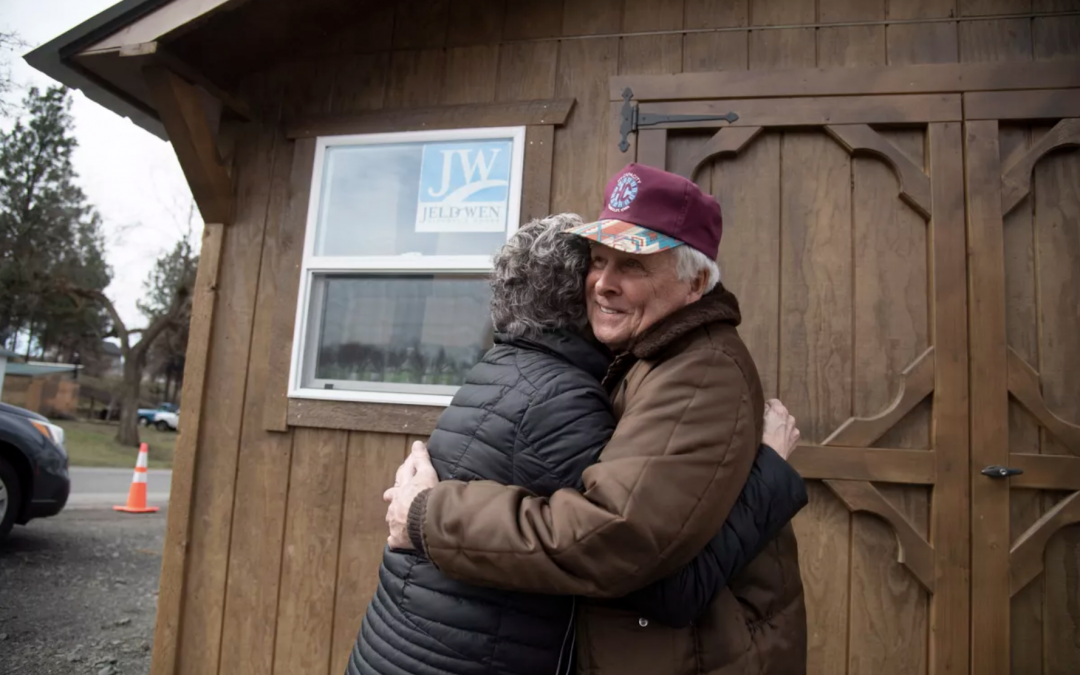 For the last 40 years, the John Wayne Trail Riders have ridden their horses into Malden, where they were greeted with friendly faces and a nice dinner during their state crossing on the Palouse to Cascades State Park Trail.

But this year, they rode in with tears in their eyes, 77-year-old Jerri Hunnicutt recounted.

Over the last four decades, the trail riders have felt so welcome in Malden they took it upon themselves to help in the town’s development, among other things, donating money to the combination community center and food bank.

The trail riders felt for their friends in Malden and weren’t sure if they could even continue the ride this year, with burned-out bridges and a town that lost everything on their route, said Susie Pressnall, the designated lead rider.

Malden residents contacted the trail riders board of directors, saying they really didn’t want to lose the tradition, Pressnall said.

So the trail riders arrived in town Wednesday, unsure what to expect. But what they found was the same loving and helpful community ready to receive them at the town’s new temporary center, the combination food bank and library.

All of Malden’s events over the last eight months have centered around the town’s library and food bank, the best place for a good book, lively conversation and something to fill the cupboards.

Peggy Buxton, from the Tri Cities area, fills up two large containers with water for her horse Nacho, left, Wednesday, June 2, 2021 as both try to keep cool in Malden, Idaho, which becomes a horse camp once a year when her group, the John Wayne Pioneer Wagons and Riders, makes a stop in the tiny town in Whitman County, the first since the town burned last year. The riders group supports the Palouse to Cascades Trial and rides it every year in 10-25 mile segments. The group supports their ride by bringing RVs, horse trailers and a variety of support services like portable toilets, water for humans and horses and their own food. (Jesse Tinsley/The Spokesman-Review)

Wednesday afternoon in the sweltering heat, volunteers pulled cool water from donated refrigerators and set up tables for the evening’s big shindig, a dinner put on by the Order of the Eastern Star.

The library’s book sale had just opened as residents ducked inside the food bank to cool off in the air conditioning.

For about a decade, Lori Dickinson, 66, has volunteered at the Malden Food Bank. She worked with former leader Herb Bacon for years, but after he died, Malden Town Council member Bob Law stepped up.

Every Wednesday morning, the pair get up bright and early to drive to Colfax to pick up food from Second Harvest.

Before the fire, the food was delivered to them, and they would unload into the community room at the Malden Town Hall that also served as the food bank. The food bank was just open twice a month for people to pick up a pre-packaged box of food.

Now, Law and Dickinson, along with Nellie Flatt, 83, have set up the new food bank in a temporary trailer like a small market. The food bank is open every Wednesday afternoon, along with the library next door.

Shelves line one wall and extend through the center of the room. There are tables with day-old baked goods and a box where volunteers stash candy for the kids who come in.

“That’s what we love to see is that, you know, the little kids come in here and you make them happy, give them a candy bar or something,” Law said. 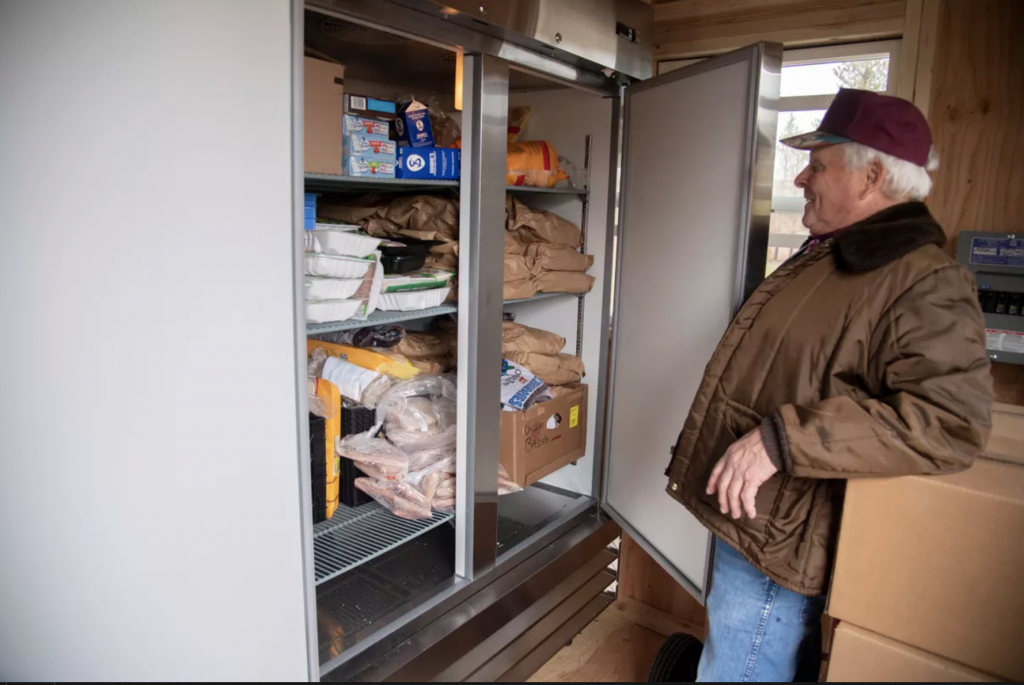 Bob Law, a town councilman who also runs the food bank and participates in many town functions, checks out the store of frozen food, Friday, Mar. 26, 2021 inside the food bank storage shed in downtown Malden, Washington. The town that was decimated by fire on Labor Day 2020 is still struggling to recover. (Jesse Tinsley/The Spokesman-Review)

Law has taken the initiative to rebuild the food bank with donated freezers and refrigerators, and even some cash donations. Through that support, he has tried to expand the variety at the food bank.

Instead of pre-boxed items, Law lets people have the shopping experience, only taking items they like to eat.

“Give people what they eat,” Law said.

With cash donations, he purchases items such as condiments or flour and sugar that aren’t available through Second Harvest. If things are going really well, he’ll get some hamburger or bacon. People are sick of chicken, he said, explaining that’s the most common meat available at the food bank.

Since the fire, new people have started coming into the food bank, Law said. In May, they served 153 families from the surrounding area, the majority of whom were over 55. As of 2019, the U. S. Census Bureau estimated there were just shy of 300 residents in Malden.

Flatt, who volunteers each week at the food bank, said since the fire, people have more opportunities to receive help, especially food.

“Anybody complains about needing food, they’re crazy in the head,” Flatt said. “My estimation is that they’ve been better taking care since this whole fire than they have in their whole lives.”

Flatt, who was a school bus driver for 30 years, said she helps people feel comfortable coming in by asking them what they need and helping them shop.

Her personality is on display as soon as you walk through the doors, with her chipper and often sassy greetings followed by a hug.

Like Flatt, Dickinson goes out of her way to make sure people have what they need. She often follows behind patrons who are a bit shy taking all the food they might need, filling up a second bag of food and handing it to them on the way out.

Still, there is stigma coming to the food bank, she said.

“I think they don’t want to be fingered as, you went to the food bank,” Dickinson said. “It’s just like everybody thinks, you know, that this town is poor. This town is not poor, they’re on a limited income.”

While the food bank may officially only be open one day a week, Dickinson, who lives up the street, said she’ll often get a call from a resident saying they need something.

Dickinson will grab her keys, go get whatever they need and bring it to them.

“If they need anything and we have it and the food bank isn’t open, we get down here and get it for them,” she said.

With the closest large grocery store in Cheney or Spokane, it can be difficult and expensive for people to drive all that way for one small necessity, she said.

“This is where everybody gets to see everybody,” Dickinson said.

Meta Marshall, 75, and her husband, Patrick, have lived in Malden on and off since the 1990s. The couple, who met at a car show in Rosalia, own 13 lots in town.

While the retirees currently live in San Souci, a gated mobile home park in Spokane, they spend much of their spring and summer staying in the barn in Malden where they fish and garden.

During the COVID-19 pandemic, the Malden property became even more important to the Marshalls, who planted a large vegetable garden in hopes of helping to feed their neighbors who are on a fixed income.

“The day of the fire, we had the best crop that we ever had,” Marshall said.

The couple had just loaded up their cars and were eating lunch when they noticed something was amiss in the sky, Marshall said. They began getting ready to leave when a sheriff’s deputy came around the corner and yelled that they had to evacuate, Marshall recalled.

Marshall pulled out in her car, thinking her husband had said he was right behind her. But what he really said was he was staying.

“He saved the barn with a garden hose,” Marshall said.

While the couple didn’t lose their barn, they did lose the rental home they owned nearby. Since the fire, the Marshalls have taken it upon themselves to adopt the stray chickens running around town whose coops burned down. They currently have 41 chickens that they take care of while staying in the living quarters of their barn.

On a food bank Wednesday last month, Marshall brought donations down from San Souci before picking up a bag to fill for herself.

She said she loves the food bank “a lot for food, but this is where I get my information.”

“I can talk to people here and see how they’re doing and see what’s going on,” Marshall said. “That’s really cool.”

Socialization is a big part of the food bank, and often people will congregate inside or just outside the doors chatting.

“I love seeing my people here in town,” Dickinson said.

On Wednesday, Law was helping set up for the trail riders dinner and keeping an eye on the food bank to see if anyone needed anything. He sees the more than a dozen hours he works at the food bank each week as part of giving back to the town he loves so much.