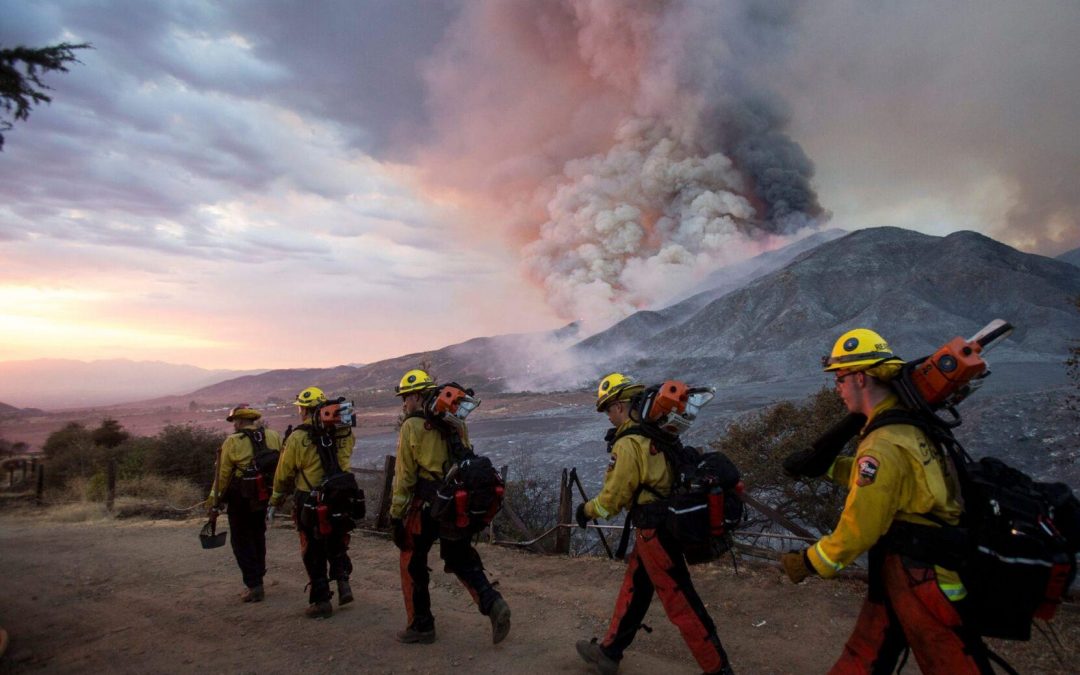 During a virtual news conference with eight governors—two Republicans and six Democrats—Biden announced a series of new steps to help shore up the nation’s wildfire response.

First, Biden said he would be raising federal firefighters’ hourly pay from $13 to $15 to bolster the nation’s 15,000 wildland firefighting force. Those jobs will also become full-time rather than seasonal as the nation’s wildfires burn past their usual October expiration date in the American Southwest.

Federal firefighters are expected to play a much more significant role in fighting wildfires. According to the Congressional Research Service, around 70% of the nationwide acreage lost to wildfires in 2020 was on federal lands.

‘We know this is becoming a regular cycle, and we know it’s getting worse,” Biden said. “The truth is, we’re playing catch-up. This is an area that’s been under-resourced, but that’s going to change if we have anything to do with it.”

In April, Biden issued a similar executive order raising federal contractors’ hourly pay to $15 per hour by 2022. He has voiced previous support for raising the federal minimum wage for all American workers from $7.25 to $15.

The governors on the call praised the decision as a common-sense response and an “incredible economic opportunity” to create more high-paying jobs.

“It’s music to my ears,” said California Gov. Gavin Newsom. “We need to pay our firefighters more because we don’t have enough firefighters, full stop.”

In 2020, firefighting resources were stretched so thin in California that the state called on international fire teams from Israel and Australia to supplement its 5,350 professional and volunteer fire fighting force. California saw more than 4.2 million acres go up in flames in 2020, including in wine-growing Sonoma County. Biden said the state would receive a $30 million grant to pay for firefighting resources.

One issue raised on Wednesday was the states’ growing reliance on the National Guard in natural disasters. To that end, Oregon Gov. Kate Brown suggested the federal government provide training for National Guard members to serve as active firefighters in the coming years.

The news comes as the Western U.S. faces severe drought and 47 large wildfires have burned more than 667,500 acres in 12 states, the National Interagency Fire Center reports. More than 7,200 wildland firefighters are assigned to incidents.

Over the past few weeks, heat maps of the Western U.S. have resembled a blood orange. From California to Colorado, triple-digit temperatures are the norm. Death Valley temperatures reached 128 degrees Fahrenheit on June 17, shattering its 104-year-old record by six degrees. In Denver, residents lived through a three-day streak of 100-degree weather in mid-June.

The story is similar to the Pacific Northwest, where mild summers have been the rule, not the exception. Cities like Portland and Seattle saw 108 and 115-degree weather on Monday, respectively. Rain is not forecast for the next two weeks in Oregon or Washington, where more than 50,000 acres have burned so far this year.

A growing number of towns along the West Coast have become sitting targets for wildfires in past years. In California, fire all but wiped out the Northern California towns of Paradise and Berry Creek in 2018 and 2020. In Southern Oregon, small-town communities such as Talent and Phoenix were razed. In Washington, the towns of Malden and Pine City were razed. Those towns once housed 51,431 people combined.

Millions of acres have been blackened by wildfires raging nationwide in 2021. INCIWEB reports 400,000 acres are burned or still burning in Arizona as of June 30. In California, that number is 31,869 acres burned from 4,152 incidents in 2021, according to CalFire. In New Mexico, a lightning-induced vegetation fire in Gila National Forest has grown to 88,918 acres and 24% contained as of June 27, local authorities report.

Biden used the news conference as an opportunity to highlight the bipartisanship his administration wants to convey as illustrated by the governors gathered.

“Wildfires are not a partisan phenomenon,” Biden said. “We need a coordinated, comprehensive response and we want to know what you, the states and localities and tribal governments, those on the front lines, are facing in this danger, and what you think would help the most.”

Montana Gov. Greg Gianforte and Idaho Gov. Brad Little, both Republicans, claim they were not invited to Biden’s news conference. Arizona Gov. Doug Ducey’s office also claims the Republican governor was not invited to the event.

“No state in what it faces and how it responds is like another,” Little and Gianforte wrote in a news release. “We were disappointed to learn not all western states who face a harsh wildfire season will be at the table.”

White House officials have said all Western governors were invited to the event. Biden said Wednesday that he plans to hold annual briefings each wildfire season.

In the meantime, temperatures are poised to dip below 90 degrees in parts of the West Coast closest to water. Landlocked communities can still expect 100-degree temperatures through next weekend.