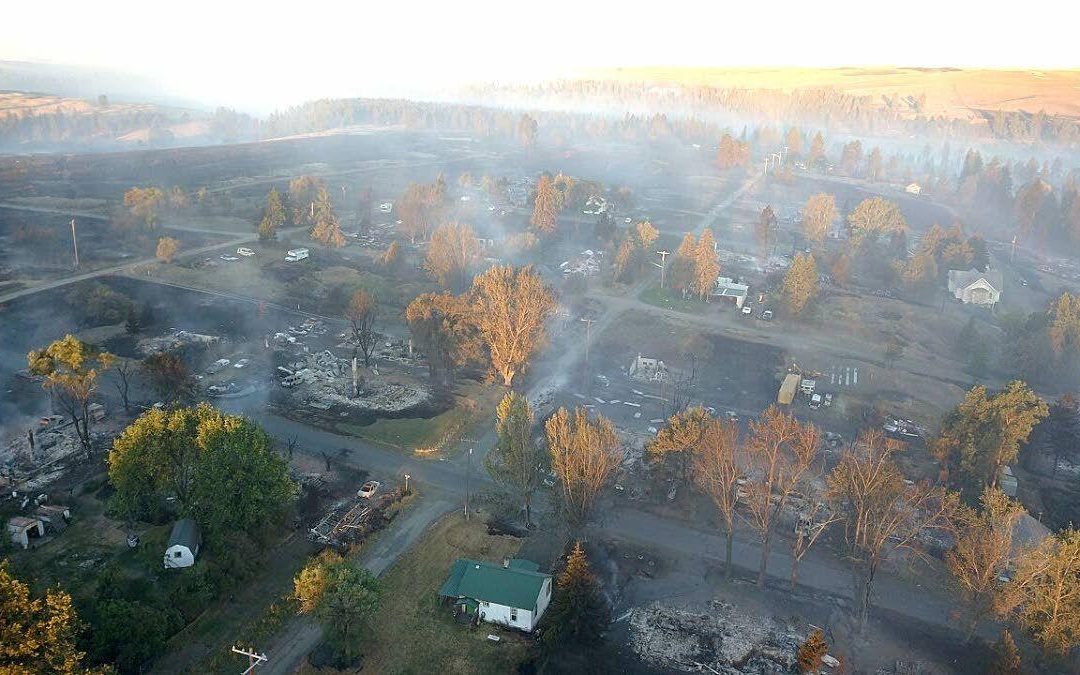 This report was published first in the Moscow-Pullman Daily News on May 18, 2021. By Elaine Williams, for the Daily News.

An investigation by the Washington Department of Natural Resources found a fire that leveled most of the town of Malden started when a tree branch touched an Avista Utilities power distribution line.

The Babb Fire began at a time when the 15,000 acres that burned were under a red flag warning for high winds and relatively low humidity, according to a report about the investigation, which was recently released.

“The (department) wildland fire investigation determined that the Babb Fire started due to a branch from a multi-dominant Ponderosa Pine tree (that) came into contact with an Avista Utilities power distribution line causing a fire to start in the seasonally dried grasses, bushes and timber,” according to the report that was completed on April 26.

Almost everyone who lived in the 121 homes in rural Whitman County that were lost in the fire on Labor Day is still in the early stages of rebuilding or making decisions about if it is feasible to do so.

Some are living in temporary shelters, such as recreational vehicles on the lots where their residences burned. Many have found places to live in other communities.

The results of the report are being analyzed by Avista, which did its own investigation in September, and, like the Department of Natural Resources, noted the weather conditions.

Avista’s investigation determined the primary cause of fires in the region that day was extremely high winds and weather, which triggered wildfires and affected utilities throughout the Pacific Northwest.

“The company has not found any evidence that the fires were caused by any deficiencies in its equipment, maintenance activities or vegetation management practices, although it has become aware of instances where, during the course of the storm, otherwise healthy trees and limbs, located in areas outside its maintenance right of way, broke under the extraordinary wind conditions and caused damage to its energy delivery system,” according to Avista’s most recent statement about the fires.

The utility has been involved in fire recovery efforts with Paul Kimmell, Avista regional business manager, maintaining a presence in the community, according to a statement from Avista after it received the Department of Natural Resources Report.

“Avista has served as a steady supporter, facilitating connections, helping to build capacity, convening people and organizations and much more that has contributed to the community’s ability to access funding and move toward rebuilding in tangible ways,” according to Avista’s statement.