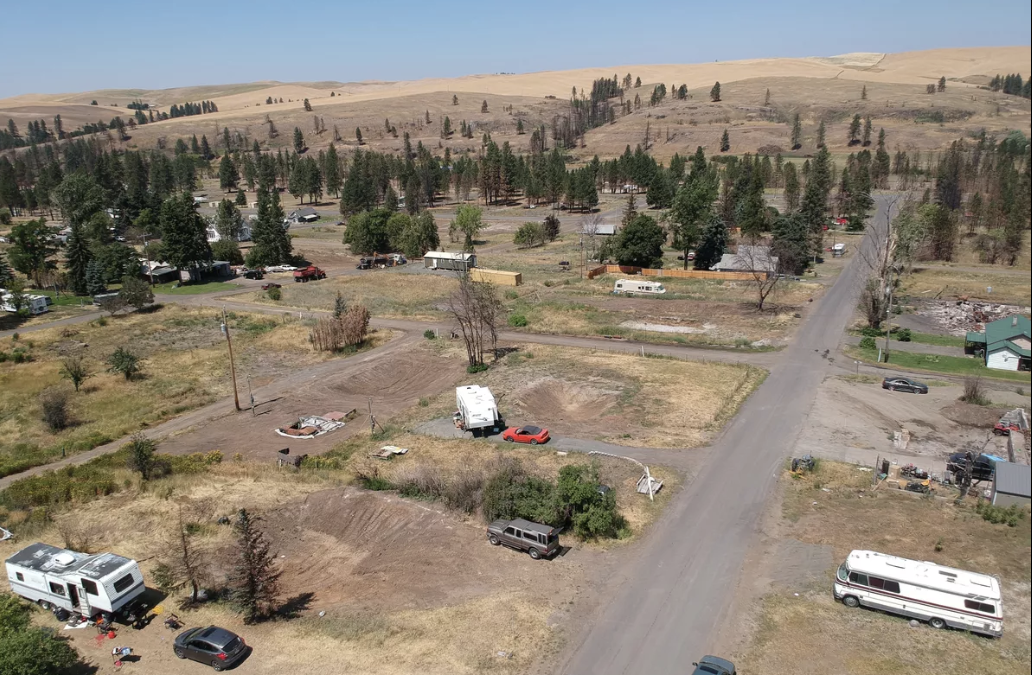 This article first appeared in the Spokesman-Review on September 8, 2021. Article by Emma Epperly. Photos by Jesse Tinsley.

The rural town of Malden didn’t have much to offer when it came to amenities, but it had decades of history and a quiet sense of community.

That is what made Scott Hokonson move to Malden full time after owning land there for a few years.

“The reason I stayed here is because everybody waved,” Hokonson said.

When most of the town burned to the ground last September, much of that history was charred, the quiet town turned into an emergency zone and the lack of resources at the town level became a significant problem. 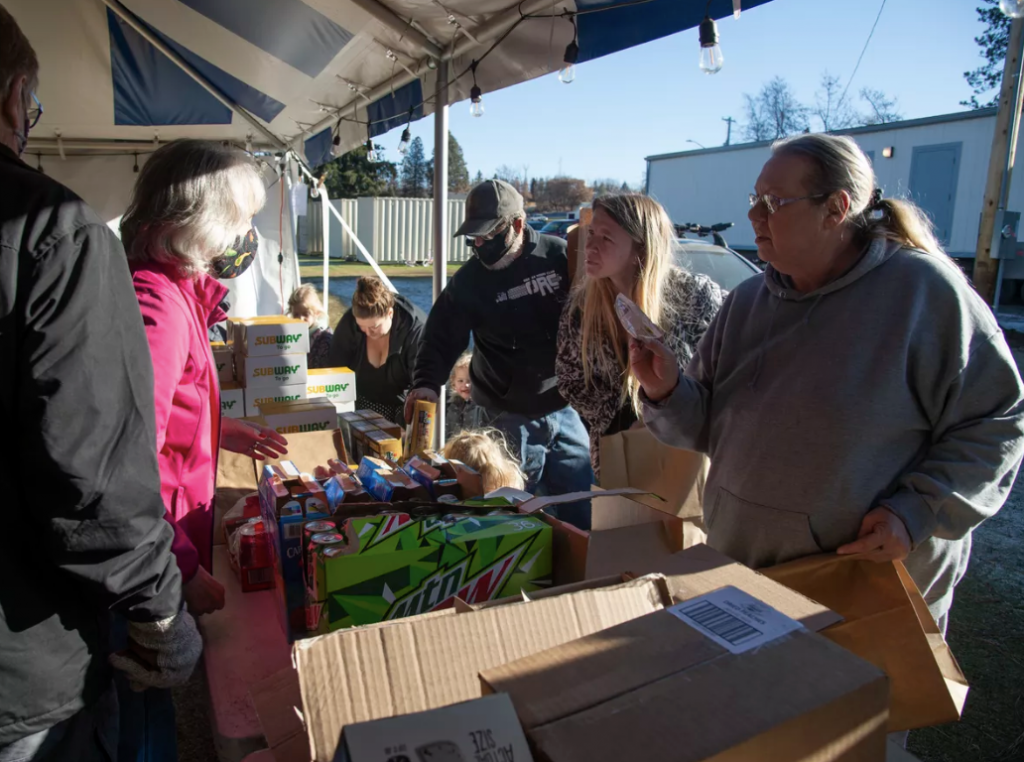 Quiet community with a dark side

“It’s kind of an isolated community,” said Whitman County Sheriff Brett Myers, noting Malden is about 30 miles from both Spokane and Colfax. “It struggled in terms of overall services in that area. Oftentimes with communities like that there’s going to be a little more interaction with law enforcement.”

“It wasn’t necessarily a community that was attractive but at the same time it was home to a lot of good people,” Myers said.

Just a few miles up the road, Pine City boasted a historic stone church and well-maintained cemetery but no services. Many of Malden’s residents had family roots in the area that went back generations or grew up in Malden or in another tiny town on the Palouse like St. John, said Mayor Dan Harwood.

In recent years, homes in Malden were cheap, and Hokonson, director of the newly formed long-term recovery group, bought his “for the price of a used Camry.” Still the houses often weren’t in great shape, with old wiring, leaky plumbing, and in need of significant repairs.

Hokonson initially bought land in Malden to have a large garden but quickly fell in love with the small town’s friendly energy. He bought a run-down 1909 Sears kit craftsman house that he completely renovated.

Hokonson was also at a crossroads in his life. A divorced father to three boys, he had enrolled in the Master of Social Work program at Eastern Washington University in hopes of starting a new career. He commuted the 25 miles to Cheney for school, a drive many Malden residents had to make.

Without any businesses in town, most residents were either retired, receiving some type of government assistance or commuting to work elsewhere. The median household income in Malden was low at $37,500 compared with $42,745 for Whitman County and $78,687 statewide, according to 2018 estimates by the Census Bureau. Due to the state of disrepair, many homes in town were uninsured.

Other residents were somewhat transient, living with friends or renting decades-old trailer homes.

Banks wouldn’t lend money on many of the homes in Malden, but if people could come up with the cash they could be a homeowner, Myers said.

“Look, they were a roof over their head and they were a home for those people which now they don’t have,” Myers said. “So to have a home that had some heat, a flushable toilet, running water and you could get out of the elements for $35,000, it was heaven for some people.”

There were some issues with drugs in town, Myers said, but also sexual assault investigations. The most famously dangerous man in town was Bobby Bilderback, who was convicted of murder in 1987. Bilderback pleaded guilty in 2013 to charges related to the overdose and subsequent coverup of the overdose death of a teen boy at his Malden home.

“You knew who the trouble-causers were and you expected the trouble from wherever,” said Kellie Brown, who lived next door to Bilderback. “But I mean for the most part it was quiet, pretty peaceful and it’s really, really pretty here.”

Despite Malden’s problems, most residents say they felt it was a safe community. While some of the houses were run-down or surrounded by dozens of junk cars, the town was quaint and very picturesque, Myers said.

“I love it here,” Brown said. “Just because it was rural it was really quiet. I can’t explain this but we have the most beautiful scenery and sunsets.”

Besides the beautiful scenery, Malden didn’t have much to offer in amenities.

The one thing that kept Malden incorporated was its water system maintained by property taxes, said Harwood. Residents didn’t expect much else from their town government.

The water system survived the fire but with the century-old homes and decades-old trailers gone it became clear that there would need to be some reconfiguring.

Typically right after a wildfire on this scale, local agencies rush in to help residents before large agencies like FEMA arrive to help local leaders understand the scope of the recovery process.

After the Babb Road fire, the Red Cross put people up in hotels while other groups like the Rosalia Lions Club helped replace necessities. State and county aid workers descended to Malden, while firefighters still squashed hotspots, to help sort out the growing needs of residents. Then Gov. Jay Inslee applied for FEMA aid. Due to President Donald Trump’s disdain for Inslee, that request sat pending for months.

“Without that declaration that process does not happen,” said Carlene Anders. “It delays the ability for people to make decisions about their recovery.”

Anders led fire recovery efforts in Okanogan County after the Carlton Complex Fire. She has since traveled across the country helping other local leaders set up their own long-term recovery groups.

In 2015, FEMA aid was quickly authorized for Okanogan County. FEMA Voluntary Agency Liaisons (VALs) were a key part of explaining the recovery process and resources available to them, Anders said.

“Those VALs are very critical to a community that has been hit with disaster and they don’t know what they’re doing,” Anders said.

The VALs explain how each piece of the puzzle of state, regional, federal, and private resources come together to help a town recover, Anders said. Without them, people like Gerry Bozarth from Spokane County Emergency Management and Hank Cramer, a contractor with Washington State Emergency Management, were left to fill the gap.

They, along with Anders, helped residents create the Pine Creek Community Long Term Restoration Group lead by Hokonson. Avista offered to pay Hokonson’s salary initially and did so until July.

When FEMA public assistance finally was approved, all that support was provided virtually because of COVID-19 instead of the typical boots on the ground deployment.

Waiting in limbo for months on the FEMA decision “set us back a year,” Harwood said.

With only limited help from experts on disaster recovery, the mayor at the time of the fire, Chris Ferrell resigned. A longtime Malden resident, Harwood was appointed to replace her.

With the trauma of losing their town and homes on top of the stress of trying to navigate the complex bureaucratic disaster recovery system, there was lots of turnover in both the City Council and long-term recovery group. Hokonson himself resigned from City Council this summer to focus on his duties as director of the LTRG.

After FEMA individual assistance was denied, Small Business Administration loans became the next hope for recovery but loan applications were handled remotely, complicating the process.

“We have people that love to throw out misinformation and I don’t know how to stop that,” Harwood said. “It takes somebody on grounds and that’s (the town clerk), and that’s me.”

Of the 61 people who started an SBA loan application only 39 completed the process and only 17 were approved for loans as of late August. The loans totaled a little over $1.6 million. Eight businesses completed loan applications and two were granted, totaling just under $340,000.

“We had to tell folks to have faith that the system will work, and it didn’t,” Harwood said.

In May, the Department of Natural Resources found that the weakened tree that fell on Avista power lines needed “closer inspection.” While the report didn’t explicitly put the blame on Avista for the blaze, some Malden residents feel the fire was the utility company’s fault.

Avista has maintain the fire was an “incredibly unfortunate act of nature,” said Paul Kimmell, the Avista business manager for the Palouse region who has been involved in the Malden recovery process.

Not only was the traditional aid not available for Malden and Pine City but the town ran into issues updating to more modern building codes.

Many of the town’s homes were built quickly by railroad companies years before on small lots, and now those lots are too small to meet the modern standards for septic systems. Malden doesn’t have a municipal waste management system and installing the large on-site sewage system that Harwood requested federal funding for will likely take at least three years.

Even if residents were able to get approval to build, the country’s housing crisis intensified over the past year, causing the cost to rebuild even a modest home to skyrocket. In Spokane, building permits were delayed, causing wait times for contractors and even those who wanted to order mobile homes were told to expect six-month long delays.

People in temporary housing faced challenges too with a tight rental market and rising rents, something Hokonson himself has been concerned about while living in a rental home in Spokane.

Despite the significant hurdles, some progress has been made.

State contractors cleaned up most of the debris in town. Avista brought in temporary buildings to be used initially by the long-term recovery group then by contractors doing the clean up. The second building is used as the town library and food bank. Another temporary building, paid for by the town’s insurance, serves as the clerk’s office and town hall. Recently, portable showers were installed to give residents, many of whom are living in RVs, a place to wash.

Two homes were built by Western Anabaptist Mission Services with funds donated to the Pine Creek Long Term Recovery Group and given to two women in Malden. Hokoson said the group has committed to build at seven more homes over the course of the next year.

The long-term recovery group received several significant donations through the Innovia Foundation including an anonymous gift of $400,000 to build a community center and $50,000 from Avista for the same use.

National disaster recovery organizations have pitched in, too. The Red Cross granted Malden about $750,000 to be used for a variety of purposes, a Center for Disaster Philanthropy grant of $100,000 will be used to pay for a construction manager and planning for a new town park. Catholic Charities offered up access to its grant writing team for the next five years and the Washington State Department of Commerce awarded the town $900,000 for a new public service building.

While the donations have rolled in, there is little visible progress in town with just a handful of homes rebuilt and RVs dotting the hill above the town.

Still Harwood and Hokonson are optimistic that Malden will be able to recover and be even better than before. Harwood hopes to have high-speed fiber optic internet installed throughout town, roads repaired and hopefully to attract a small business or two.

Part of what made Malden work before was that the limited expenses of the city were able to be paid for with the limited property taxes collected. However, with large improvements like the new sewage system there are large costs. While property values will likely increase after the fire as new more fire-safe buildings are placed on cleared lots, that increase may not be enough to continue to pay for the new improvements Harwood and Hokonson hope for.