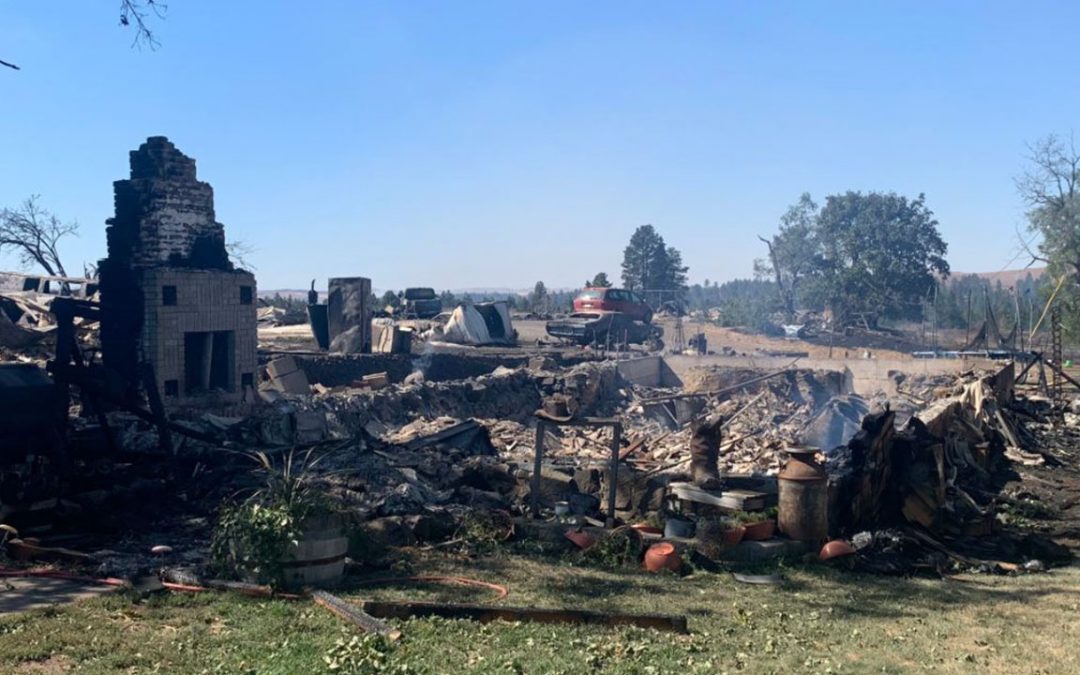 MALDEN, Wash – A previously damaged tree branch falling onto an Avista power line caused the wildfire that destroyed most of Malden and Pine City last fall, according to a report completed by the Department of Natural Resources. 4 News Now obtained the report through a public records request.

The report details the investigation from beginning to end, starting with an interview with a man who lived in a fifth wheel on the south side of Babb Road. The man saw the first signs of smoke and called 911, pointing to a tree line at the base of the hill that leads up to the John Wayne Trail. That led investigators to the man who owned the property, who showed them the area where he believed the fire started.

“He said that he had been over to an area that he believes is the area of the origin, as there was a tree with a yellow ribbon around it next to the power lines,” the report says. That property owner was retired from Inland Power and Light Company, “but the distribution line where the fire started belonged to Avista Power, which feeds the natural gas station located on Babb Road west of his residence.”

The investigator then found the tree in question, flagged off with yellow tape. He described it as a “multi-topped Ponderosa Pine tree with a portion of the tree bent to the south in the direction of the power lines with the top resting on the ground under the power distribution lines.” There was also a second tree very close by.

Tree roped off in aftermath of Malden fire

The investigators at the scene weren’t sure who put up the tape around the tree. Looking closely at the tree and the ground around it, noticing another pine tree that displayed a specific fire pattern.

“At this time we were confident the fire progressed out of the flagged off area noting that as our general origin area (GOA). From this point we went back to the main advancing part of the fire southwest of the fence line,” he wrote. “We continued reviewing the fire pattern indicators, such as protection, cupping and grass stems, to the south to about where the top of the branch rested on the ground. At this point we felt we were in the Specific Origin Area (SOA), which was approximately a 6’ – 8’ area.”

“Several miscellaneous causes were also considered and ruled out such as fireworks, grinding/cutting, firearms use, electric fence, spontaneous heating, refraction/reflection, flares and structures to list a few. The only miscellaneous cause that could not be excluded at this time was power line. As the power distribution lines transect the origin area and a nearby tree with striations on the upper portion of the branch lying on the ground could not be disregarded.”

Investigators worked with Avista crews on the scene to gather any evidence from the power lines.

Investigators then called in a DNR forest health specialist to inspect the tree from which the branch fell. She determined that the tree had been previously damaged by porcupines. There was also evidence the tree experienced stress from Gall Rust disease.

When inspecting the branch, they found marks that didn’t appear to be natural. “These marks appeared similar in size to the conductors we obtained by the Avista utility crew.”

“On Wednesday, November 4, 2020, I sent a request for information mailed to Avista Utility in Spokane, WA requesting distribution line data related to fluctuations of voltage, amperes and related data indicating line disruption,” the investigator wrote. “This request was for 30 days prior to September 7, 2020 to the time the circuit was opened, either automatically or manually. As of the submission of this report, no response to the request for information have been received.”

In the conclusion of the report, the investigator wrote that there are nine possible categories of causes of wildfires, ranging from kids playing in the area to lighting to passing trains.

According to the report, “All could be eliminated except for power lines.”

The forest pathologist who inspected the tree wrote, “It is my opinion that because of the unusual configuration of this tree, and its proximity to the powerline, a closer inspection was warranted. A nearer inspection of the tree should have revealed the cut LBL [lateral branches/leaders] ends and its previous failure, and necessitated determination of the failure potential of the adjacent LBL, implicated in starting the Babb Road Fire”.

A forest entomologist wrote that she believed it was the failure of one branch that fell from the 44-year old tree onto the line that sparked the fire. She said that while potential for the branch to fail was not easily visible from the road, other damage would have been.

“Although the tree did not fail at a V-fork due to the presence of multiple tops, the potential for this type of failure would have been visible from the road.”

Tuesday afternoon, Avista responded to the report with this statement:

The primary cause of the fires on Labor Day 2020 in the region Avista serves was extreme high winds, a weather event that triggered wildfires and affected many, including electric utilities, throughout the Pacific Northwest.

We are aware that during the course of the storm, a lateral branch on a Ponderosa Pine tree located outside Avista’s maintenance right-of-way, broke under the extraordinary wind conditions and caused damage to the energy delivery system at or near what is believed to be the area of origin of the wildfire.

Avista received a copy of and learned that the Washington Department of Natural Resources had completed its investigation and issued a report on the Babb Road Fire on May 14, 2021.  We are in the process of analyzing the findings contained in the DNR report.  To date, Avista has not found any evidence and does not believe that the fires were caused by any deficiencies in its equipment, maintenance activities or vegetation management practices.