This article was first published by the Spokesman Review on May 5, 2022. By Colin Tiernan.

SPRINGDALE – One by one, the firefighters pour the diesel-gasoline mix out of their big red drip torches and set the forest aflame.

They start a tidy line of small fires first, then fan out, lighting up slash piles and dead brush here and there. The woods get warm. Sap crackles and pops. Within minutes the bright green hillside is covered in wind-blown waves of light gray smoke.

On Tuesday, the Washington state Department of Natural Resources burned 108 acres between Springdale and Loon Lake in Stevens County. It’s just the second time the department has done a prescribed burn since 2004, and it marks the beginning of a dramatic shift in how the state manages public lands.

Eastern Washington is going to see more prescribed burns in the coming years.

For 18 years, the Department of Natural Resources hasn’t burned state lands on purpose. New smoke policies aimed at protecting air quality were part of the reason for the prescribed fire shutdown, Williams said. An uptick in wildfires was a big factor, too.

But in the last few years, as catastrophic megafires have become commonplace throughout the West, state and federal agencies have pushed hard to bring prescribed fires back. Many argue they’re essential in order to fight wildfire and restore healthy forests.

Not all fire is bad, they stress.

“By putting some good fire on the landscape now, we really reduce the risk of catastrophic wildfire later in the season or years to come,” Williams said.

Wildfires have gotten worse for a few key reasons.

Climate change has made the planet warmer, leading to hotter, drier and longer fire seasons. Invasive species such as cheatgrass are a big part of the problem on the sagebrush steppe. A century of fire suppression has allowed fuels to build up in forests, paving the way for bigger and hotter burns that can have devastating environmental consequences.

Prescribed burns are a way of undoing the ecological damage caused by long-term fire suppression. They mimic the beneficial, natural fires that would have swept across the landscape periodically if Americans hadn’t been consistently putting them out.

“This is an awesome tool that we’ve lost for a long time,” said Shawn Soliday, a land manager and incident commander with the Department of Natural Resources who has fought wildfires for 41 seasons. “It’s the right tool.” 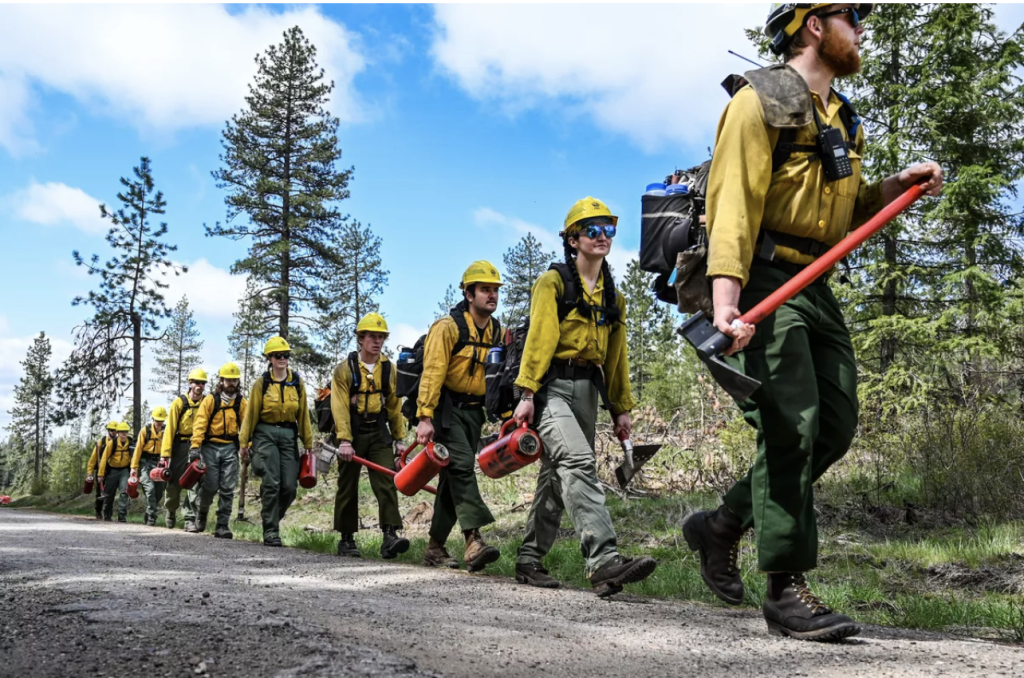 Department of Natural Resources firefighters from Colville head out Tuesday to do a 108-acre prescribed burn on a hillside near Springdale, Wash. (COLIN MULVANY/THE SPOKESMAN-REVIEW)

Prescribed fires have a host of benefits.

Many Western ecosystems, including ponderosa pine forests, evolved with fire and need it to remain healthy. Prescribed burns help restore the natural ecological functions of many environments.

By removing fuels, a prescribed fire can stop or slow big wildfires. The burn area can act as a buffer between an inferno and a town.

Andrew Stenbeck, a regional manager with the Department of Natural Resources, said the 108-acre Stevens County burn will help the forest in a few specific ways.

Most importantly, he said, it’s returning fire to ponderosa pine stands that evolved with it and need it.

“Typically a fire would have burned through there, low intensity, every 10 to 15 years,” he said. “We’ve probably missed 10 (fires) in the history of this stand.”

Without fire, the forest has become more Douglas fir heavy, to the detriment of the ponderosas and the natural ecology of the area.

Before the 40 or so Department of Natural Resources firefighters began the Stevens County burn Tuesday morning, the area looked vibrant.

The ponderosas were few and far between, due to a recent timber harvest, but purple and yellow wildflowers grew out of the ground everywhere. Turkeys could be heard gobbling on the property.

Now, much of the ground is charred. But the bleak appearance is deceptive, Stenbeck said.

The burn will release nutrients, in turn allowing for an explosion of growth. A new, healthier forest will rise from the ashes.

The same will happen on thousands of acres of Eastern Washington forests as the state’s prescribed fire program grows and fire returns to the ecosystems that need it.

“It’s good to see,” Stenbeck said as he watched the fire burn. “We’re going to be creating some better landscapes.”