This article first appeared in the Spokesman Review on March 14, 2022. By Orion Donovan-Smith

WASHINGTON – After kicking the can down the road for half a year with stopgap measures, Congress last week finally did its most fundamental job and passed a $1.5 trillion bill to fund the federal government.

The legislation was notable for a few reasons, not least because it averted a government shutdown and funded President Joe Biden’s priorities more than a year after he took office. Along with billions in emergency aid to Ukraine that drew wide bipartisan support, the bill also saw the return of earmarks, a process that lets lawmakers request money for specific projects for their constituents.

Republicans were divided over both the inclusion of so-called “member-directed spending” and the legislation as a whole, which was split into two pieces in the House before being combined into a single bill in the Senate. Rep. Cathy McMorris Rodgers, R-Spokane, voted for just one of the two House bills, opposing the part that included most nondefense spending, including reauthorizing funds for the Violence Against Women Act, the National Flood Insurance Program and more.

“I voted in support of the security package that funds border security, America’s law enforcement, and our troops – including our airmen and women at Fairchild Air Force Base,” she said in a statement. “This also includes important security aid for the freedom-loving people of Ukraine standing up to Vladimir Putin and his evil attacks.”

While some of her fellow Republicans opted out of the revamped earmark process, McMorris Rodgers chose to participate and secured $22.8 million for projects in Eastern Washington, despite eventually voting against the bill that included those funds. That includes $3.5 million for a new sewer system in Malden, the Whitman County town devastated by a wildfire in 2020, and the same amount to provide clean drinking water to Airway Heights, whose water supply is contaminated by chemicals from nearby Fairchild Air Force Base.

“I believe this funding will help improve lives, build stronger communities, and make a real difference,” the Spokane Republican said.

While the earmarks represent a small proportion of the total bill – only about 1% of discretionary spending – proponents argue they direct money to important projects that may not otherwise get federal funding and encourage cooperation between lawmakers in an era of growing partisan polarization.

Critics, meanwhile, warn the practice could bring back the corruption and frivolous spending that led to earmarks being banned for a decade, although the new program includes stricter transparency measures.

North Idaho will receive no earmarked funds after the region’s three GOP lawmakers, Rep. Russ Fulcher and Sens. Mike Crapo and Jim Risch, chose not to request the money. Like McMorris Rodgers, Fulcher voted for the House bill that included defense spending and against the other bill.

“The horrendous images of the bombed children’s hospital and civilian deaths made clear the URGENT need to get American security aid and equipment to Ukraine,” Fulcher said in a statement, referring to Wednesday’s bombing by Russian forces of a maternity hospital in the Ukrainian city of Mariupol.

Fulcher said he could not support most of the provisions in the spending bill, citing funds that could go to abortion providers, COVID-19 relief and more.

He said he was happy the legislation was split in two so he could vote for provisions he supported. Although it passed with wide support from both parties, some progressive Democrats opposed the bill Fulcher voted for, which also included funds for the Department of Homeland Security, U.S. intelligence agencies and more.

“I voted FOR sending weapons to Ukraine and I voted AGAINST the liberal Wishlist priorities in the second bill,” Fulcher said. “I urge my Democrat colleagues to take politics out of this process and deal with the dangerous situation abroad, without tying strings to their own liberal agenda.”

Crapo, the top Republican on the Senate Finance Committee, said in a statement he voted against the final spending bill despite supporting the $13.6 billion in aid to Ukraine, roughly half of which goes to the Pentagon while much of the rest funds humanitarian aid.

“I support the U.S. providing additional resources for Ukraine to defend itself against Russia’s barbaric attacks, and would have voted for Ukraine aid funding as a standalone measure,” Crapo said. “However, with inflation reaching highs not seen in 40 years, I could not agree to a sweeping spending package that does not go far enough to address wasteful spending programs and our unsustainable debt crisis.”

Rep. Mike Simpson, another Republican who represents the eastern half of Idaho, voted for both parts of the package in the House and secured $23.6 million for his district, including $7 million for a new fire station for the Shoshone-Bannock Tribes.

“While this process was far from perfect, I voted yes on this legislation because the final package contains huge wins for Idaho and the nation,” Simpson said in a statement. “Those wins include record funding for the Idaho National Laboratory, an increase in funding to address the ongoing border crisis, a prohibition against listing the sage grouse as an endangered species, maintaining enacted pro-life protections, and bolstering our nation’s military readiness.”

Washington’s senators, who were eligible for more total funding because they represent the entire state, secured a total of more than $164 million in earmarks. 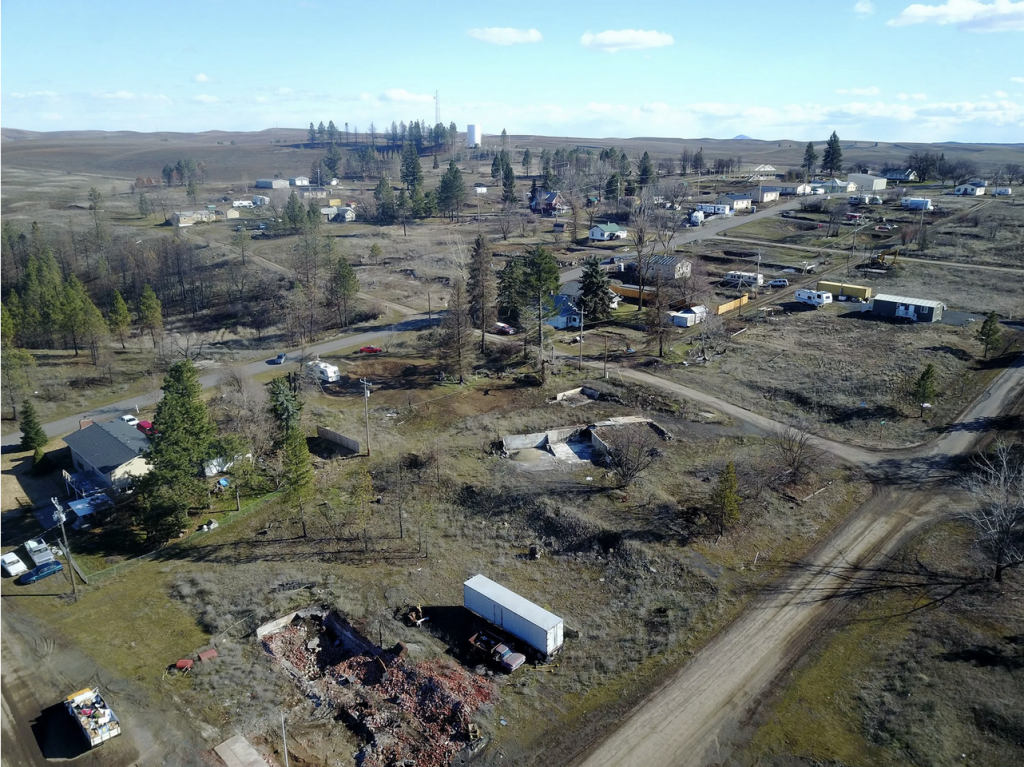 Malden, Wash., is still struggling to rebuild after the town was devastated by a wildfire fire in 2020. Federal legislation recently approved by Congress includes $3.5 million for a new sewer system for the town. (Jesse Tinsley/The Spokesman-Review)

Sen. Patty Murray, the second-ranking Democrat on the Senate Appropriations Committee, the panel in charge of funding the government, got a total of nearly $113 million. Some projects were requested by multiple lawmakers, including the Malden sewer system, for which Murray asked for $750,000 while McMorris Rodgers requested $6 million.

Among 51 other projects across the state, Murray directed $3 million to a project that will widen South Barker Road in Spokane Valley between Mission Avenue and the city’s southern boundary.

Sen. Maria Cantwell, D-Wash., secured a total of $51.7 million for 40 projects in Washington, including $1 million for a transportation and logistics hub at Spokane International Airport.

Rep. Dan Newhouse, R-Sunnyside, voted for both parts of the legislation in the House and secured $16.5 million for eight projects in his Central Washington district, including $1 million to help relocate Walla Walla County’s 911 dispatch and emergency operations center, which now sits in a location vulnerable to earthquakes and flooding. Newhouse and McMorris Rodgers jointly directed $2 million to a groundwater replacement program in Cashmere.