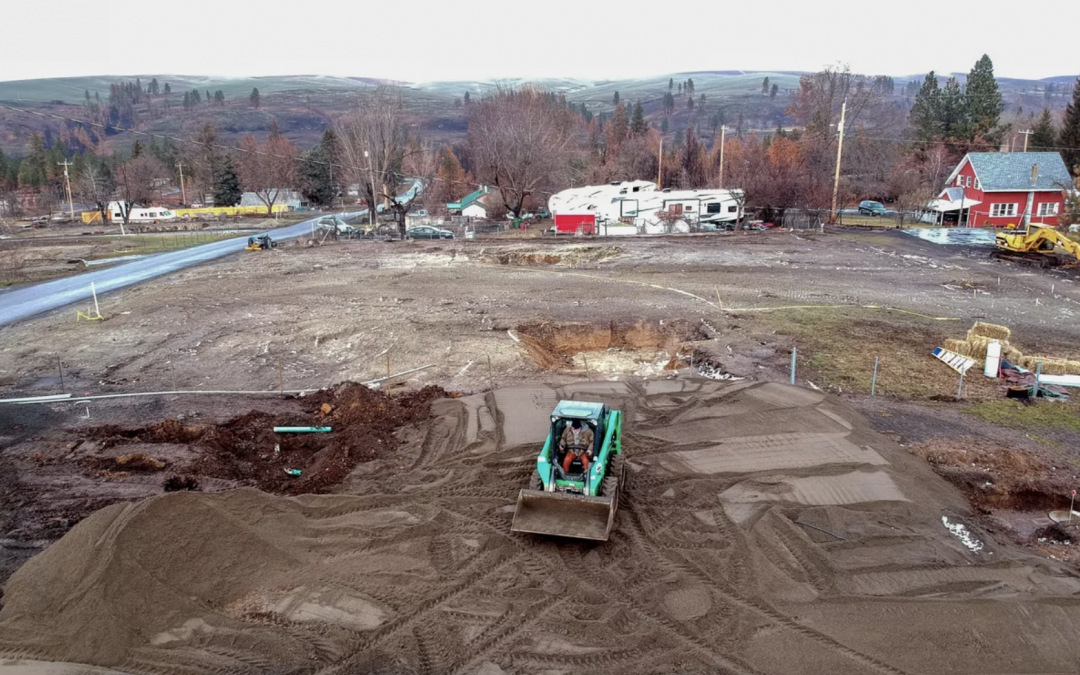 When Rachel Blakely talks about the day her house burned down in Malden, she has a good sense of humor.

She jokes about how she didn’t think the fire would get to town, how her son burned the tread off his tires going back into town too soon to see if their homes had survived, and how “stupidly” her little shed survived when everything around it burned. 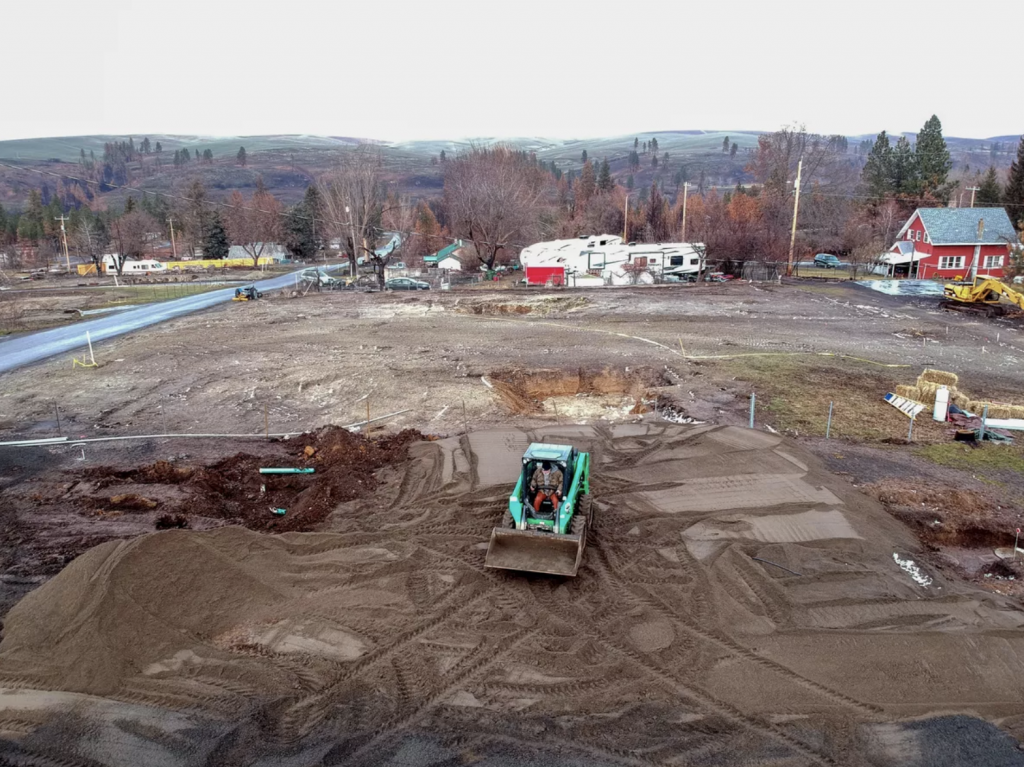 Shane Blakely, working Feb. 3 for a local contractor, operates a skid-steer loader to smooth a burned-out home site in the scarred landscape that was once the town of Malden, Wash. Blakely, his girlfriend Rachel Blakely and her son’s family have lived in the two fifth-wheel trailers, in the background, since the Labor Day fire. (Jesse Tinsley/The Spokesman-Review)

But that humor goes away when she talks about the days after, when everything was uncertain, when she only had the clothes on her back, when she realized she didn’t have a home.

“When you have a safe place to come home to you can handle anything,” Blakely said. “But being homeless is horrible.”

On Labor Day weekend, 80% of the homes in the small towns of Malden and Pine City had burned. As the ashes settled, a new devastation came to light: Only 40% of the structures in town were insured, leaving most residents with no safety net. Aid from the federal government stalled for months and even the residents who had insurance, like Blakely, were often underinsured, partially due to rising building costs.

Most Malden homes were either single- or double-wide trailers or homes built about 100 years ago that, unless updated, were complicated to insure. Then add in Malden’s location, where homeowners have to take more wildfire prevention measures than homeowners in more developed areas. On top of that, Malden and Pine City only have a small volunteer fire department. The closest, larger department is in Rosalia about 7 miles away. 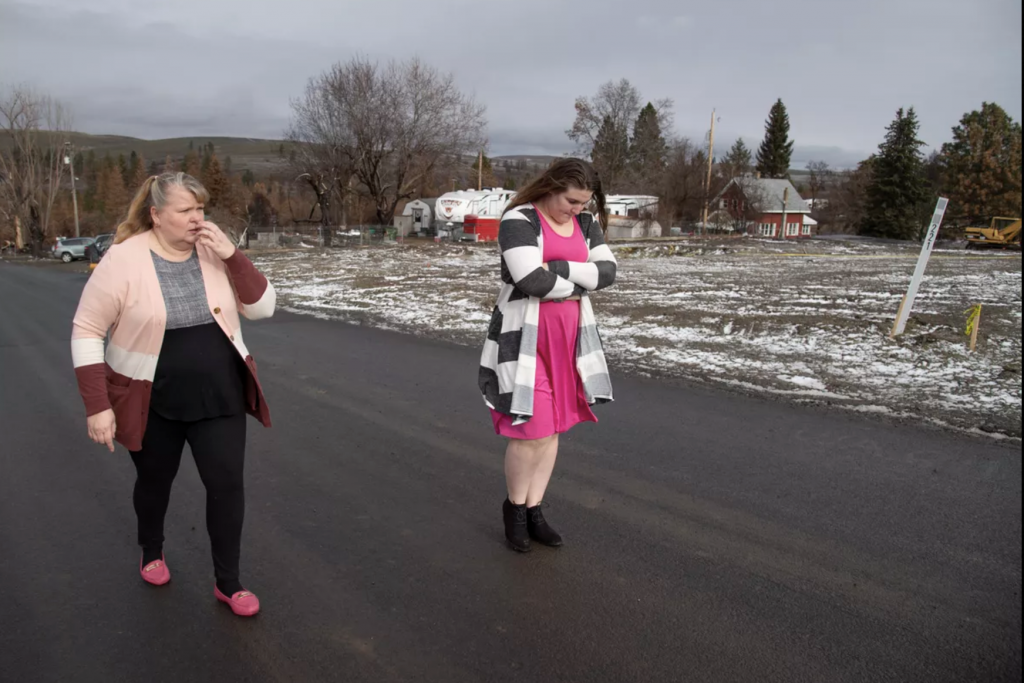 Rachel Blakely, left, and daughter-in-law Alyssa Hale walk Feb. 3 from Rachel’s burned-out home site, where the family has lived in fifth-wheel trailers since the Labor Day fire in Malden, Wash., to the site where Hale and Rachel’s son are rebuilding their home. Blakely and her boyfriend will be rebuilding again soon. (Jesse Tinsley/The Spokesman-Review)

A place to raise a family

The wildfire last fall doesn’t even make the top five in worst things to happen in Blakely’s life.

“I am an expect-the-best, but-prepare-for-the-worst kind of person,” she said.

She moved to Malden in 2000 from where she grew up in nearby St. John. She was dating Jeff Blakely, who lived in Malden at the time.

The couple bought a house and blended their families, with his three children and her son.

The home sat on a hill overlooking their neighbors’ homes dotting the hillside that led to Malden’s historic main street with buildings from the early 1900s.

“There was an archway between the dining room and the living room and we marked off all the kids’ heights,” Blakley said with a smile.

Not long after she moved to Malden, Jeff had a fertilizer accident at work that caused severe health issues. The kids began marking Jeff’s height as he shrunk, unable to stand up tall like he used to. Rachel also had ongoing health issues, including a stent due to excess fluid on her brain.

Still, the family managed to maintain a positive outlook on life with Rachel working from home for Traveler’s insurance and Jeff on disability and helping to raise their children. The couple even welcomed their first grandchild.

Then in 2009, the couple’s 2-year-old grandson, Avery, fell into Pine Creek and drowned. His body was never recovered and it devastated the Blakely family.

Just two years later, Jeff died due to complications with his health conditions, leaving then 39-year-old Rachel and four children behind.

It had been a whirlwind decade starting a new life with Jeff, and then losing him. But the children remained the focal point of her life, Blakely said.

Her son, Ben Hale, married his high school sweetheart, Alyssa, and the couple moved into the home on the hill in Malden that Rachel and Jeff had bought to merge their two families into one. The move signaled a bit of a fresh start for Blakely who bought a house just down the hill to be close to her grandchildren.

The Hales began marking their children’s heights in the same archway.

Life was good, and then the fire. 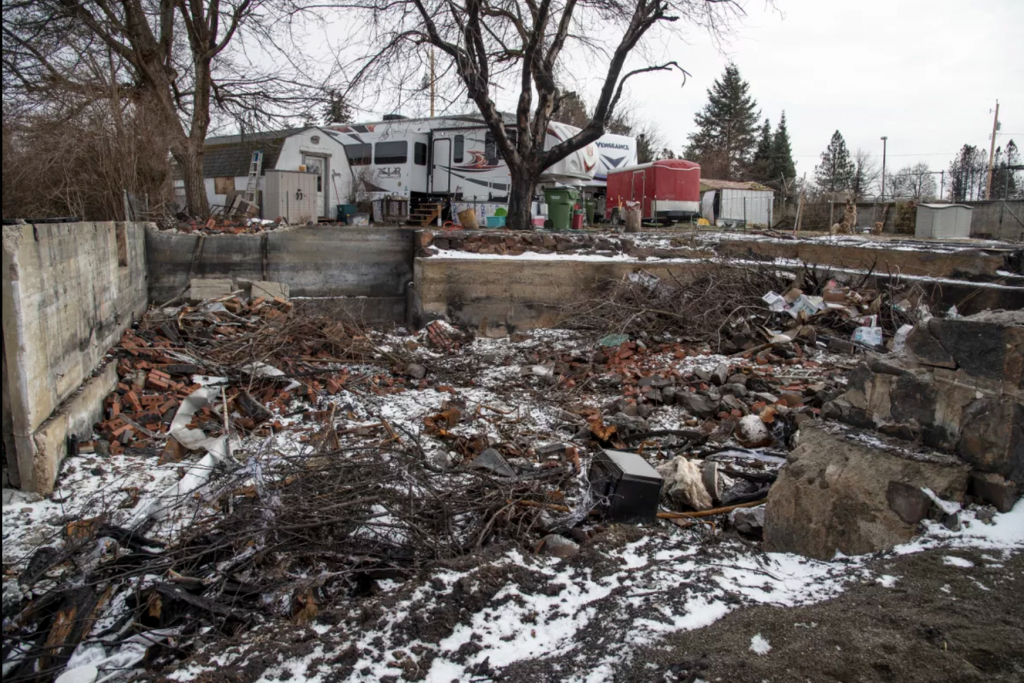 Rachel Blakely’s burned out home site is in front of the two fifth-wheel trailers she, and the family of her son Ben Hale and daughter-in-law Alyssa Halet live since the Labor Day fire in Malden, Washington, shown Wednesday, Feb. 3, 2021. Ben and Alyssa are rebuilding their home nearby. Blakely, who works in insurance and had insurance before the fire, will be be rebuilding again soon. Her boyfriend Shane also lost his home in another part of town. (Jesse Tinsley/The Spokesman-Review)

On Labor Day weekend, Rachel and Shane were enjoying a relaxing afternoon at his house, located down the hill from Blakely’s home, next to Pine Creek.

She was awakened from a leisurely nap by a dog. When she let the dog out, she smelled smoke.

Moments later, a phone call alerted them Malden was being evacuated.

Blakely rushed up to the family home to make sure Ben and Alyssa were leaving.

At nearly nine months pregnant, Alyssa loaded up her three children and headed toward a family member’s home.

Once his wife and children were safe, Ben drove back into town hoping to pick up the family’s RV so they would have a familiar place to sleep that night but when he got into town, everything was burned to the ground.

“I knew when he called and said that everything was gone, that it was gone, but I didn’t want to believe that it actually was gone,” Alyssa said. “I still had hope that maybe there’s just too much smoke. Some places are gone, yeah, but there’s no way that both houses could have been gone.”

Rachel’s little house down the hill, the historic family home, and Shane’s trailer by the river were razed by the fire.

Unlike most of Malden, Blakely and her son Ben had insurance.

“Because I’m in the industry, I had a lot of confidence that it would be a struggle but it would all work out,” she said. “And on the good days, I still do.”

Uninsured, underinsured, and no help in sight

People often use health insurance as their baseline when they think about all forms of coverage. But health and home insurance are completely different marketplaces, said Brine, of the insurance council.

“Health insurance has a limited number of companies that offer very specific kinds of plans,” Brine said. “Home insurance is a completely different marketplace. It’s hundreds of companies writing coverage and all of them are different from each other.”

Brine encourages homeowners to do their research and look at multiple different insurance companies or find a reputable independent insurance agent to help them in the process.

But researching and contacting different insurance companies can be difficult after the first few roadblocks, especially while juggling a full-time job.

Many Malden residents, such as Sage Butler and Jason Hoover, said they were working toward purchasing an insurance plan after inheriting their Malden home. However, they couldn’t afford to have a contractor do the updates on their home. Doing renovations themselves was slow and the insurance companies with which they inquired wouldn’t insure them until renovations were done.

It’s very rare for a home to be completely uninsurable, said Kara Klotz of the state Office of the Insurance Commissioner. But that doesn’t mean the cost of the policy isn’t prohibitive to residents of a town like Malden with a median household income of just $37,500. In Washington state, the median household income is more than $74,000, according to Data USA.

Inheriting a home also removes many of the inspections done when buying a house the traditional way, including taking out a mortgage from a lender who requires insurance, Brine said.

“If they haven’t done that, looking for insurance, they might be in for a rude surprise when the insurance agent comes out and says I don’t think we can insure this, look at this wiring, look at this foundation,” Brine said. “The bigger question for people is what will they be able to afford insurancewise.”

With surprises like knob and tube wiring or a cracked foundation, the cost may be prohibitive to get the level of insurance that would allow a homeowner to replace their home in the event of a disaster. If a homeowner can’t find insurance coverage in Washington state they can use the Washington Fair Access to Insurance Requirements (FAIR) Plan which provides basic property insurance up to $1.5 million.

Many Malden homes were either single- or double-wide trailers which cannot be insured with a regular homeowner policy, Klotz said.

“Sometimes it’s hard to find coverage for those because they don’t meet building code like a house does,” she said. “They deteriorate more quickly than a home.”

For trailer homes there is the little known option of purchasing standalone renter’s insurance to cover the contents of the residents but it’s not recommended to forego homeowner or dwelling insurance, Klotz said.

Most insurers do not offer coverage for mobile homes that would cover a complete replacement and often insurance for the content of a home is a percentage of the home’s total value, Brine said, which causes another roadblock to replacing items lost in a disaster.

And even if a homeowner such as Blakely had insurance before the fire, that doesn’t mean they’ll have enough money to rebuild. With the current housing boom in Washington, the cost of building materials and labor has increased, causing insurance money to fall short of paying for a similar home to the one that was destroyed.

It’s important for homeowners to check in with their insurance agent annually and ask as many questions as they can think of.

“It’s definitely a unique and bad situation that so many were uninsured in that area,” Brine said.

“The underinsurance issue I think is very real and I think it is more common than people might think,” Brine said.

Two out of every three homes in America are underinsured, according to Nationwide Mutual Insurance.

“People get the policy and they just sort of forget about it,” Brine said. “Information is power.”

Just days after the fire, Blakely, along with her son Ben had filed their insurance claims.

“I just wasn’t planning for the emotional impact,” Blakely said. “Because it’s a feeling like you don’t even know, I mean sitting in a hotel and realizing you literally have nowhere to call your own, it’s a horrible feeling.”

So Blakely and Ben’s family decided to buy new RVs and start living on her burned property until they could build new homes.

His older children spend the week in St. John with relatives so they can go to school. On the weekends they’re back together in Malden.

Construction has begun on a new home for Ben and Alyssa. It will be large and new with space for all the kids and a shop that matches the house.

For Blakely, the fire has become a chance to be more involved in the community and help her neighbors heal. As a board member of the Pine Creek Community Long Term Recovery Group, a group of community leaders working with government agencies and nonprofits to help Malden and Pine City rebuild.

“This is our opportunity to really make Malden shine and I want to be a part of it.”