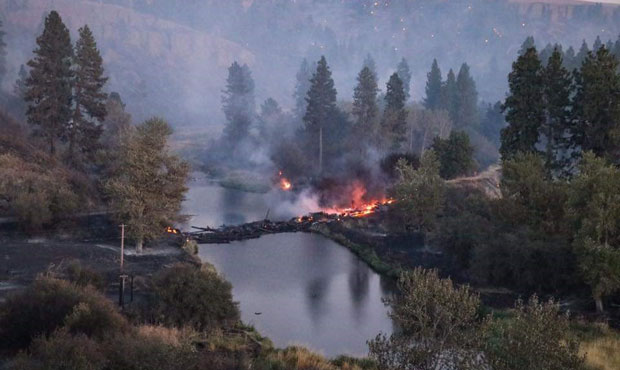 Wildfires and high winds on Monday were an especially bad combination in Whitman County south of Spokane. Much of the old railroad town of Malden – as well as an iconic bridge near Colfax – were destroyed by separate fires.

Malden was founded around 1908, and named for Malden, Massachusetts. It became a “division point,” or regional headquarters, for the railroad known as The Milwaukee Road. Their full name was the Chicago, Milwaukee & St. Paul Railroad, and they were the last to build a transcontinental route across Washington and the Cascades, decades after the Northern Pacific and the Great Northern had done so.

At Malden, which was on the mainline between Puget Sound and Chicago, the Milwaukee Road built a sizable rail yard and a roundhouse – for locomotive maintenance and repairs – which meant jobs, money, and a reason-to-be for the pop-up town. 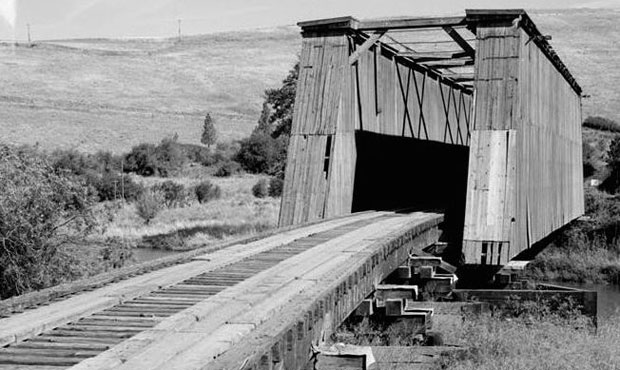 The Manning-Rye covered bridge as it appeared before the fire. (Courtesy Eric Weitze via Whitman County Historical Society)

Bob Lambeth is a historian working on his Ph.D. at the University of Montana. He grew up in Spokane, and focused on Malden and other towns in the Palouse for his master’s thesis – and a related online tour – while attending Eastern Washington University in Cheney.

Lambeth says that as a railroad town, Malden really boomed in its early years. By 1920, the young community had as many as a thousand residents and a robust commercial district. But all that was over within a decade or so, when the railroad shifted operations elsewhere. By the early 1930s, the population of Malden had dropped to less than 400.

When he was studying the town and visiting it frequently six or seven years ago, Bob Lambeth immersed himself in the history he could find in old photos and archives. He walked the streets trying to imagine the structures that had stood in the once-booming place, and he seems to have developed a sort of melancholy affection for Malden, as well as how and why forces beyond the town’s control had changed it. 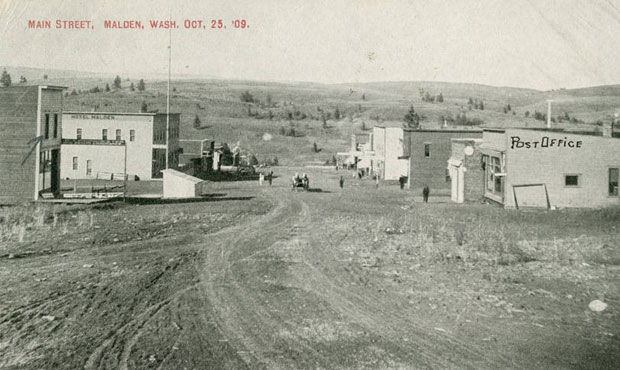 A postcard of Malden from 1909, around the time the town was founded as a “division point” or regional facility of the Chicago, Milwaukee & St. Paul Railroad, which was nicknamed the “Milwaukee Road.” (Whitman County Historical Society)

“I could only find a picture of one of the hotels – they had the Empire Hotel there and then they also had the Malden Hotel,” Lambeth said. “And if you see some [old] panoramas of the town … [there were] several dozen structures aside from private residences. There was a lot of businesses there.”

Walking the quiet streets of Malden circa 2014 and finding only a hole in the ground where a hotel had once stood, or looking at satellite imagery to reveal the unmistakable traces in an otherwise empty grassy meadow that showed where the Milwaukee Road roundhouse once stood, couldn’t help but make an impact on Lambeth.

“It was just kind of a very eerie feeling when you look at these old images and you realize how much of a community this place was several decades ago,” Lambeth said, and then taking in “how much it had just really suffered as a result of the kind of larger socio-economic downturn of rural America.”

Lambeth says it was heartbreaking to hear the news about Monday’s fire in Malden. He says it was a bittersweet place that had recently had some serious issues with drugs and crime, not unlike what so many rural communities have been facing in the past few decades.

Valoree Gregory is executive director of the Whitman County Historical Society in nearby Colfax. She’s also director of the Colfax Chamber of Commerce, and runs a small business in town, too.

“I wear three hats,” Gregory said, with a chuckle.

But Gregory, who grew up in nearby Steptoe and whose family has farmed in the Palouse for decades, wasn’t laughing about what happened in Malden and the adjoining community of Pine City.

“It’s so sad,” Gregory said. “Those families have grown up there, generation after generation, and now they’ve lost everything.”

As of Tuesday afternoon, Gregory says it’s still too soon to say what comes next for those families.

“They’re still evacuated,” Gregory said. “I noticed that the Whitman County Sheriff’s Department asked that nobody go into Malden right now because it still is an evacuation zone, and so they’re not even letting in the people whose homes were saved, which there’s not very many, or the people at the post office.”

That post office, seen gutted by flames in heartbreaking photos circulating on Tuesday, has been in operation since 1913. The brick building that housed it was first a bank – perhaps built in 1908 and 1909 – but the mail for Malden residents has come and gone through the now heavily-damaged structure for 107 years. Also reportedly lost in the fire in Malden were city hall, the fire station, the library, and the Masonic hall, along with many private residences. In total, the town lost 80% of its standing structures to this week’s fire.

The bridge was built circa 1918 to cross the Palouse River, carrying an electrically powered railroad that connected Spokane and Pullman. (USGS Archives)

Colfax is about 30 miles south of Malden, and Gregory says that it was a separate fire – just north of Colfax — that destroyed one of Washington’s only remaining covered bridges.

“It was one of the most photographed structures in our area,” Gregory said. “We have thousands of photographers come from all over the country just to photograph our area because of our rolling hills, and the Manning Bridge was iconic because it went over the river.”

Gregory says the bridge – also known as the Manning-Rye Bridge or the Harpole Bridge, for long-gone nearby communities –was built over the Palouse River a century ago for an electric rail line connecting Spokane and Pullman. Its unusual design – with the trusses on each side encased in wood – allowed for an open top, which made it possible for the electric locomotive to connect to the overhead power source.

“It was considered a covered bridge, but only the sides were covered and the top was open, so that the electrical wires could go over the top,” Gregory said.

Before and after photos that Gregory shared with KIRO Radio – taken by Eric Weitze – are heartbreaking. With the loss of the Manning Bridge, a covered bridge over the Grays River in Wahkiakum County may now be the only remaining such structure in the Evergreen State. 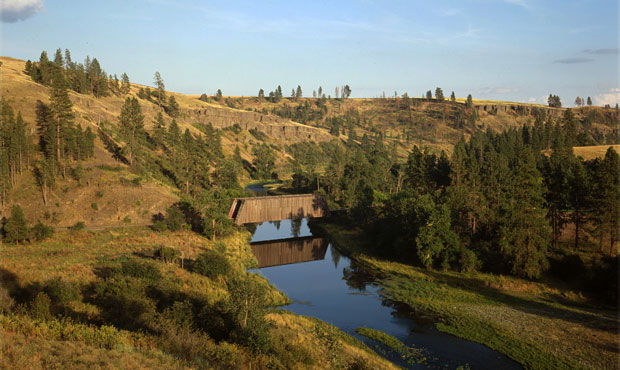 Michael Houser is the State Architectural Historian for the Washington State Department of Archaeology and Historic Preservation. He says the electric railroad that built the Manning Bridge lasted less than a decade, and the rail line and the bridge were sold to the Great Northern Railway in 1927. The Great Northern ran steam and later diesel locomotives across the old bridge until sometime in the 1960s.

Around 1970, when the rail line was no longer active, a nearby homeowner bought the bridge and converted it to automobile use as a private driveway across the Palouse River. It’s believed that the home, which Gregory says has changed hands at least once since the bridge became its driveway, was not damaged in Monday’s fire.

In spite of their attractive appearance, Houser says that the point of covering a wooden bridge was to protect the wood from the elements so that the structure would last longer.

Houser also says the open-top design of the Manning Bridge did, in fact, make it a pretty rare specimen.

“It was only one that I know of in the state that had that kind of a system, where those side trusses are boxed in,” Houser said. “So I would say it’s fairly unusual in Washington state, and I don’t think I know of any others, actually, in the Pacific Northwest that have that design.”

Chris Moore, executive director of the Washington Trust for Historic Preservation, said Tuesday that even though covered bridges are more common in other parts of the United States, they’re adored pretty much everywhere – including in the Pacific Northwest.

Part of that, Moore says, is because like other pieces of historic infrastructure, the old bridges have an almost tactile quality that makes them memorable to visit in person.

“You can walk up to a covered bridge and touch it or walk across it, if it’s open to the public,” Moore said. “And those places tie you to the history that they represent.”

The loss of the Manning Bridge, which Moore says was first listed on the National Register of Historic Places nearly 40 years ago, is almost incalculable.

Back in Colfax, Gregory says that people in Whitman County are relieved that, as far as anyone knows, there weren’t any casualties in Malden. She says various crowd-funding campaigns are underway, and photos of Malden fire’s aftermath have been spreading far and wide. 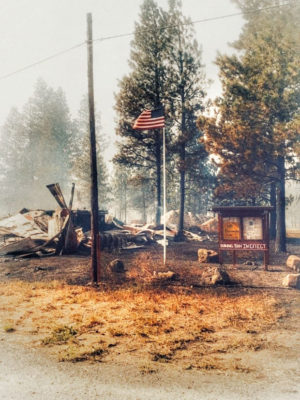 A flag pole on the edge of Malden was still standing after a wildfire ravaged most of the town. (Whitman County Sheriff’s Office via Whitman County Historical Society)

But Gregory says one image in particular has really resonated with people in the Palouse.

“I think the best photo that they got though was the whole town of Malden almost burned, and the only thing that was still standing was the American flag, and it didn’t burn,” Gregory said.

“That at least brought a little bit of hope, I think, for people,” Gregory said, as if to say, “‘OK, we’re still here. We all have to stick together.’”

You can hear Feliks every Wednesday and Friday morning on Seattle’s Morning News and read more from him here. If you have a story idea, please email Feliks here.