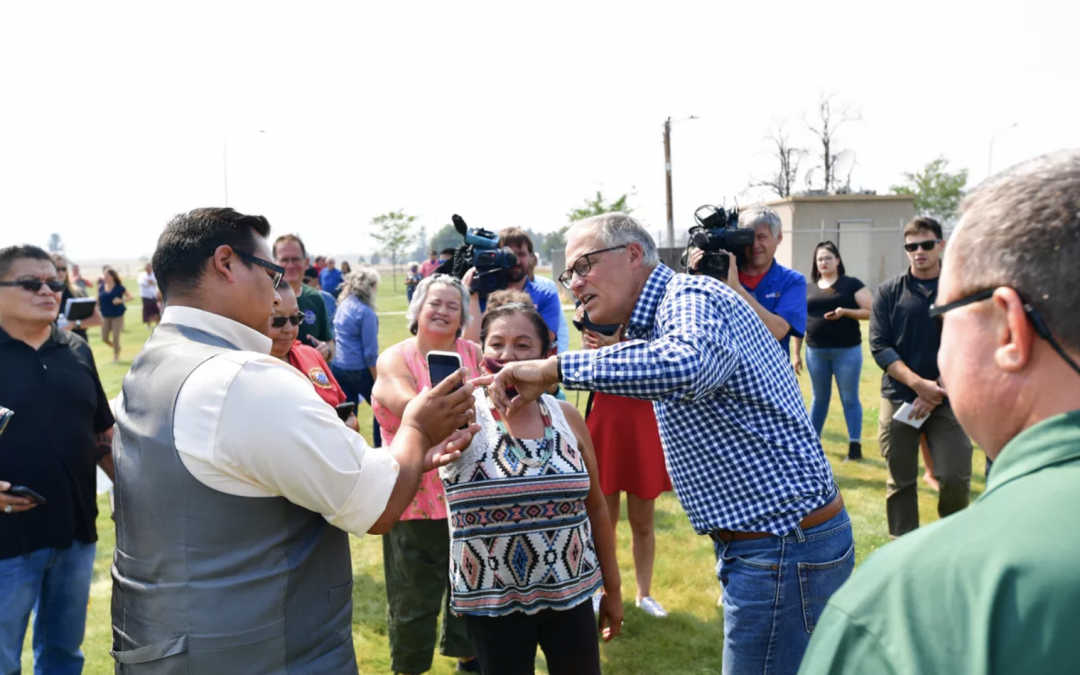 NESPELEM, Wash. – Washington Gov. Jay Inslee called for increased federal assistance for communities living on the “tip of the spear” of climate change while the hills behind him smoldered Wednesday after a fast-moving fire destroyed four homes and forced the evacuation of an entire town on the Colville reservation.

“These folks are getting hit by climate change, right, left and center,” he said during a visit to Nespelem, a city in Okanogan County.

Lightning started the Chuweah Creek fire last week. The fast moving fire forced residents of Nespelem to evacuate and destroyed four homes. The fire was 36,407 acres as of Tuesday night and 40% contained. The fire is the third major fire on the reservation in the past six years. It torched valuable timberland, killed elk and deer on which tribal members rely for food and burned traditional plant-gathering grounds.

In February, FEMA denied individual assistance to residents of Malden, Washington, the Whitman County town that burned to the ground in 2020. The assistance was denied because the impacts to the individuals affected “was not of such severity and magnitude to warrant the designation,” according to the letter from FEMA.

Most Malden residents did not have insurance. According to a National Public Radio investigation, FEMA denied roughly 70% of all wildfire-related claims after last year’s fire season in Oregon. In California, FEMA denied 86% of claims, citing concerns about fraud, according to the investigation.

“We do need the rules to change so that on a consistent basis when there are forest fires, people can get help,” Inslee said. “That’s a problem throughout the Western U.S.”

Darlene M. Wilder, a Confederated Tribes of the Colville Reservation elder and survivor of the Chuweah Creek fire, shakes hands with Gov. Jay Inslee after he named her “Washingtonian of the Day” on Wednesday during a tour to survey the Chuweah Creek fire’s damage on the reservation in Nespelem, Wash. (Tyler Tjomsland/The Spokesman-Review)

Inslee also urged residents of Nespelem and members of the Colville Confederated Tribes to lobby Congress to pass an infrastructure bill that would help repair some rural roads and provide funding to fix the Keller Ferry, which is one of only two evacuation routes for the town of Keller. The ferry has been broken since July 9, although on Monday the U.S. Coast Guard approved emergency use of the ferry during fire emergencies.

However, during the peak of last week’s fire, there was only one way in or out of Keller – U.S. Route 21.

“We have been isolated,” said Amanda Palmer, a Keller resident who addressed Inslee during a community listening session Wednesday. “There is a lot of fear in our community.”

Chairman Andrew Joseph Jr. thanked Inslee for making the trip and for providing firefighting air resources that he credited with saving homes. He hopes Inslee can secure federal aid – both in the short and long term – for the Colville Confederated Tribes.

Other community members addressed Inslee, including the mayor of Nespelem, tribal elders and members who were impacted by the fires.

“We really need help here,” said Tina Drywater, a nurse at an elderly care home that had to evacuate ahead of the fire. “We’ve lost a lot.”