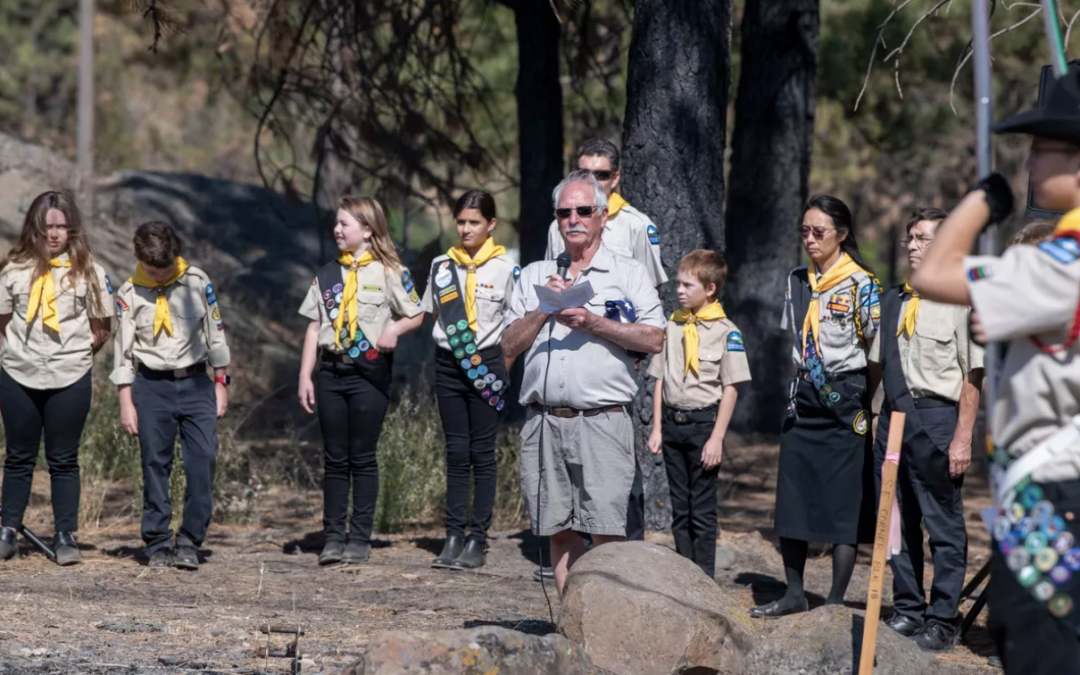 This article first appeared in the Spokesman-Review on September 7, 2021. Article by Emma Epperly. Photos by Jesse Tinsley.

Last Labor Day, a line of cars rushed through smoke, fire looming on both sides of the road, as residents evacuated Malden and Pine City.

A year later, cars rolled into Malden on a sunny September day. People climbed out, shook hands, hugged and waved as they gathered around a flag pole flying a tattered and faded American flag.

The Babb Road Fire raced through Malden and Pine City on Sept. 7, 2020, burning 80% of the towns’ homes and leaving hundreds of residents with nowhere to go. Since then, many residents have moved on, finding new places to live, while others have returned to their burned properties , at least temporarily, in RVs. The recovery process has been slow but support from communities and organizations across the region hasn’t waned. Residents and community members gathered Monday to recognize the day that changed their lives.

Mayor Dan Harwood addressed about 75 people standing in front of a now empty lot where the town’s firehouse once stood.

“It’s a new start and a new beginning,” said Alissa Hale. “Moving forward from the past.”

Hale, a board member of the Pine Creek Long Term Recovery Group, organized the event.

“I’m excited to see what Malden is going to be,” Hale said.

Scott Shauf stuck to his own corner of town for the past two decades. After the fire, he decided he wanted to be part of rebuilding Malden and volunteered to fill an empty town council position.

“It seemed like it was taking forever to get anything done and then you’re looking back on it today and the progress has been made,” Dickinson said.

The biggest hurdle thus far in the recovery efforts, cleaning up debris left in the fire’s wake, has finally drawn to a close. State contractors finished the clean-up efforts Thursday.

The town’s church has been refurbished with melted siding replaced and a fresh coat of white paint.

“It’s nice to see a community on the mend,” said Whitman County Sheriff Brett Myers. “Certainly, a community that has come back together after being driven out by fire.”

Not only did residents come together Monday but so did many of the people who came to help in the days after the blaze.

“We’ve been through the emotional roller coaster with them,” said state Rep. Mary Dye, R-Pomeroy.

Dye said she’s proud to see that “the heart of the people” of Malden and Pine City has carried them through a tough year of clean up, rebuilding and planning for the future. 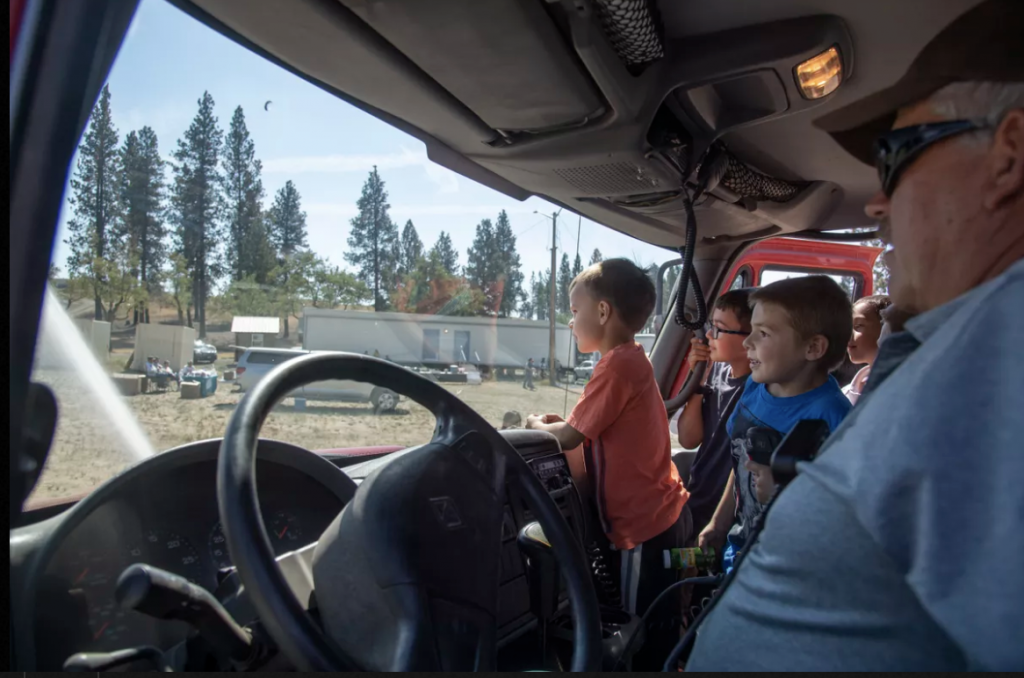 New Malden fire Chief Chance Backest, right, keeps an eye on things while Patton Hale, 5, right, tries his hand at aiming the water monitor on the Malden Fire Department brush truck in Malden City Park on Monday. The town, devastated a year ago in a Labor Day fire, held a remembrance Monday in the park. (Jesse Tinsley/THE SPOKESMAN-REVIEW)

A symbol of the new Malden was raised. A bright and crisp flag replaced the faded and tattered one that survived the flames. 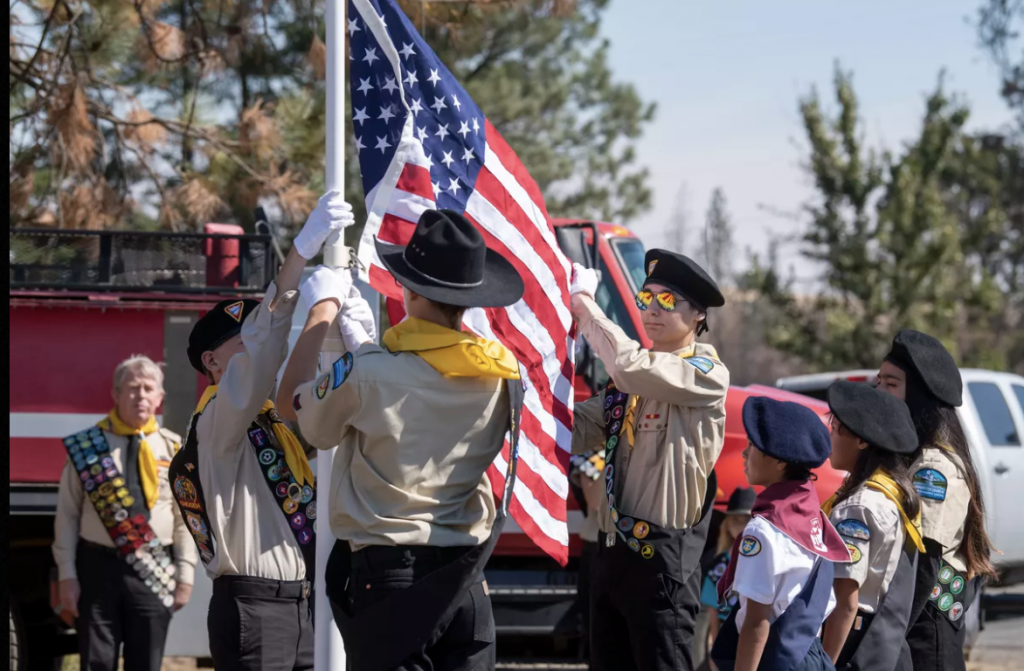 From left, Matthew Roth, 13, Matthew Clayville (back turned), 12, and Christopher Blake, 14, all members of Pathfinders, a scouting group affiliated with the Seventh Day Adventists, raise a new flag at the site of the fire station in Malden, Washington before a free picnic in Malden City Park Monday, Sept. 6, 2021. The town, devastated a year ago by the Labor Day fire of 2020, held a remembrance, raised a new flag and had a picnic in the park. (Jesse Tinsley/THE SPOKESMAN-REVIEW)

Members of the Pathfinders and Adventurers, a Seventh-day Adventist group, raised the flag in a brief ceremony.

“A beautiful day this year,” Harwood said. “Our church is standing, our flag is flying and everybody’s here together.”