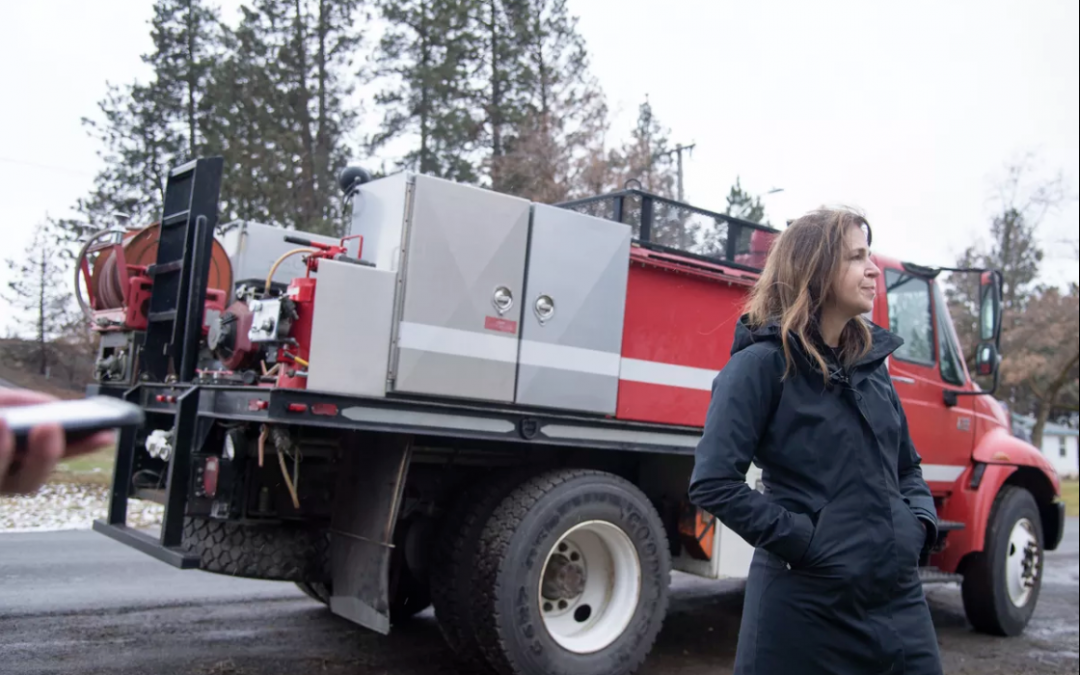 This article first appeared in the Spokesman-Review on September 10, 2021. Article by Laurel Demkovich.  Photos by Jesse Tinsley.

In recent years, small towns, like Malden, Washington, have become victim to catastrophic fires that burned around them.

As more people move into high-risk areas, the threat only increases.

Climate change has made fire season longer and fires burn more quickly in the Western U.S., leaving many to wonder how these communities can protect themselves. Experts say it will take local communities being proactive and state and federal governments investing more money into community resilience.

Most importantly, it will take learning to live with fire.

The three main factors that are leading to greater fire risk are a changing climate including hotter temperatures and drought, vegetative conditions and people choosing to live in homes built in or near forests, said Washington State University professor Matthew Carroll, who studies how communities in the West can better adapt to “megafires.”

Because the changing climate likely won’t be turned around anytime soon, Carroll said it’s time to look at the other two.

Conditions with large unkempt forest floors and debris have only gotten worse over the years as the techniques for fighting fire focused mostly on suppression and not about preventing it through prescribed burns or thinning trees, Carroll said.

For decades, government thought it could prevent large fires through suppression itself, but Carroll said it doesn’t work. That thinking has led to forests that are overgrown, diseased and full of debris on the floor.

Forest lands need treatment. Suppression seemed like it was working because the government was successfully stopping fires, but in the process, it was creating conditions that got more risky, he said.

Now, the forest floor has old debris, and trees are too close together, creating a flammable mix.

The second factor deals with where people choose to live. More and more people are moving into places that are forested or at a higher risk for wildfires, but they don’t have an understanding of how dangerous it can be, Carroll said.

The state Department of Natural Resources has outlined the risk for communities across the state. The highest level of risk is just east of the Cascades and the northeast corner of the state. Three towns – Roslyn, Twin Lakes and Leavenworth – face a greater threat than Paradise, California, which was hit by the deadliest fire in that state’s history.

More and more people are moving into these areas, what researchers call the wildland-urban interface. These areas are often the transition from forests or grasslands to suburbs or cities. Often in these areas, homes sit next to the vegetation that can fuel fires.

That puts a lot of people with little fire experience living near forests that are not properly managed during a time when conditions are drier and hotter.

What communities can do

The immediate focus for researchers and governments needs to be how to protect communities from catastrophic fire, Carroll said.

“Solution” is probably the wrong word, Carroll said, because there is no solving the actual problem of fire.

“Fire is always going to be with us, and it’s a matter of how we live with it.”

Each community is different and has its own needs, Carroll said.

On one end of the spectrum, there are communities that have a ranching or farming tradition and understand fire needs. Those communities are able to do a lot of the work clearing out old vegetation themselves. On the other end, however, are people living in a suburban area at the edge of a forest. Those people, Carroll said, often have more money, so they can hire people to do the work that needs to be done.

The most important thing is that communities need to be proactive, Carroll said.

Many people think they can take their chances, he said.

“But some percentage of people who take their chances end up with horrible consequences,” he said.

To be proactive, communities should look at things such as increased education on fire safety, using certain nonflammable building materials and better preparing emergency management.

Individual homeowners can make their land safer by creating a “defensible space” around their home. That can include making sure trees aren’t too close together or too close to the home, cleaning gutters and removing debris.

If a house sits on land with forests or trees, thinning trees could help prevent sparks from traveling from one tree to the other.

To help communities prepare, DNR launched a pilot program this year called Wildfire Ready Neighbors. It is starting in Spokane, Chelan and Okanogan counties, but will likely expand across the state with additional funding passed this legislative session.

The program brings together local fire departments, conservation districts and the state Department of Natural Resources to provide support to communities. A homeowner can get a free consultation from a wildfire expert who will walk them through how to make their space safer.

Since launching the program, state Commissioner of Public Lands Hilary Franz said the number of people who signed up has far exceeded what was expected.

“Malden was a wake-up call, tragically, for leadership, for the public,” she said.

The state is also planning to build fire breaks around entire communities or neighborhoods. A firebreak is a gap in vegetation that can slow or stop fires from spreading past it.

Putting a break around a community can save the community from getting caught in the fire and can help firefighters who arrive at the scene. Often the first thing crews do upon arrival is create a break around a town. Having a permanent one in place will free them from having to do that first thing, Franz said.

“Our public feel a sense of hopelessness in the midst of fires, that there’s nothing they can do,” Franz said. “Everyone of us has the power to prevent these fires in the first place and protect our home significantly when fires are there.”

What the government can do

Communities can only do so much and will require funding from state and federal governments to be able to be proactive.

“Adaptation happens at the local level,” Carroll said, “but they need help and they need resources to do so.”

The Legislature passed a bill last session that will direct $125 million every two years for forest health and wildfire prevention. That money will be broken down into three buckets: wildfire response, forest health and community resilience.

The state Department of Natural Resources has a Forest Health Plan to treat 1.25 million acres of land over the next 20 years. But it only covers state lands, and much of the land in Washington is owned and managed by the federal government.

Part of the federal government’s infrastructure package would go toward tree thinning, prescribed fires and grants for local communities.

Forest lands need to be managed, Carroll said, but it’s a longer-term problem.

“There is considerable evidence in the scientific literature that prescribed fire is the most effective means of reducing the risk of wildfire disasters and increasing ecosystem resilience across much of the U.S.,” according to 2019 research by Crystal Kolden, an assistant professor at the University of California, Merced. She has researched how wildfire and the human environment interact.

Most of the West, however, is not using prescribed burns enough, her research found.

“The problem isn’t too much fire,” Carroll said. “It’s not enough fire for the right reasons.”

Treating forests with these techniques will take time but could significantly help prevent fires, Franz said.

“I don’t believe we’re beyond the point of return,” Franz said. “Do we have a long way to go? Yes.”

Along with additional funding, something other states, such as California, have planned for are power shutoffs during dry conditions to prevent sparks from electricity starting a wildfire. The fire in Malden was caused by a damaged tree blown onto a power line.

Avista said earlier this summer it would not be planning for power shutoffs this fire season. The state utility commission could require utility companies to shut off power but have not done so yet.