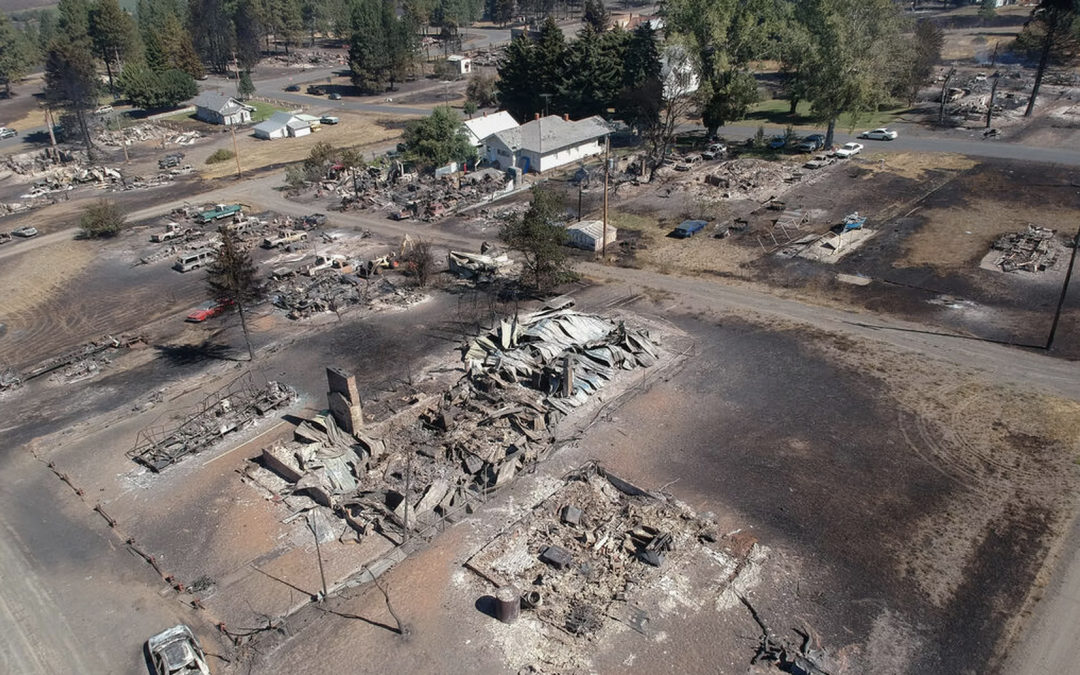 MALDEN, Wash. – The Labor Day fire that destroyed most of this community started in a stand of pine at the edge of a farm field. A treetop, buffeted by powerful late summer winds, snapped and fell onto power lines, which slapped together and spewed a shower of sparks.

Early on, this blaze appeared rather ordinary, creeping through a carpet of needles and grass. Then a big gust pushed the flames up the flank of a nearby ridge, and everything changed as the fire jumped from tree to tree, according to two witnesses who lived nearby.

In less than an hour, the fire galloped some 4 miles to the southwest through pine and fields of grain to reach Malden. The speed and ferocity of the advance doomed any effort to protect homes. Instead first responders pounded on doors – and blared through loudspeakers – to urge people to evacuate.

“I’m just glad that everybody made it. I still live in an alternate universe where … people didn’t. I’ve just started to be able to sleep through the night,” said Scott Hokonson, a volunteer firefighter and town councilman who lost his home to the fire.

This conflagration, which consumed most of the buildings in Malden and nearby Pine City, was one of at least 47 blazes on Sept. 7 and 8 that were ignited by power lines, according to a Seattle Times analysis of data from the Department of Natural Resources and other sources, as well as interviews with fire officials in Whitman and Pierce counties.

These fires flared across a broad swath of territory ranging from the Palouse hill country of Whitman County to the Puget Sound region, and offered stark evidence of the risks of keeping power lines energized during times of extreme fire weather. 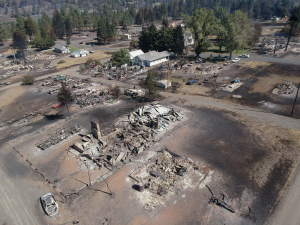 The fires destroyed 121 homes in the Malden area and at least 62 elsewhere. They were responsible for more than 60% of the homes lost in one of the worst two-day stretches of wildfires in state history. The havoc they wrought likely will accelerate a debate already brewing in our region: Is there a greater need for preemptive power cutoffs to protect public safety in some areas when dry-season high winds create a high risk of destructive fires?

This tactic is controversial. The power cutoffs can sometimes stretch on for days and pose significant hardships for people.

Yet, in California, after a harrowing half-decade of power-line fires, all the investor-owned utilities have plans – approved by regulators – for preventing fires through power cuts. In 2020, Pacific Gas & Electric (PG&E), California’s largest power provider, has carried out five of these electricity blackouts, including one in late October that affected 345,000 customers in the northern part of the state.

PG&E considers cutting power when a weather forecast includes a red flag fire warning and calls for sustained winds of at least 25 mph, gusts of at least 45 mph and humidity dropping below 20%, according to the company’s website.

Those markers were met in the National Weather Service prediction for Sept. 7 for the eastern Washington area that includes Malden, according to forecast data.

In Washington, the state Utilities and Transportation Commission does not require the state’s three regulated electrical utilities to have power shutdown plans. And Spokane-based Avista Utilities, which operates the line that triggered the Malden fire, opted not to include this option in a 2020 “wildfire resiliency plan” released in May that acknowledges the “increasing threat” within the company’s service territory.

Heather Rosentrater, an Avista senior vice president, said the plan is expected to evolve over time as “we learn more.”

The plan includes grid upgrades in high-risk fire areas to limit the spark potential of faults in lines, and using drones and other technology to help identify where more frequent pruning is required.

Rosentrater noted that the tree that fell on the line near Malden was outside of the right of way.

Chuck Schmidt, who owns the property where that tree grew, said the company still needs to do more to cut back branches that could threaten power lines. Schmidt said he accompanied a state investigator to the site where the fire started. He said the wind broke off the forked top of a tall pine, hit the line, and arced across it.

“That’s when the sparks just flew,” he said.

Since the fire, Avista based staff in Malden to restore power and provide a wide-range of other community support for damage that Rosentrater calls “heartbreaking.”

Prior to the September fires, officials of Avista and the state’s two other regulated power utilities – Puget Sound Energy and PacifiCorp – briefed the Utilities and Transportation Commission about plans to prevent power-line ignitions. In the weeks ahead, there will be more briefings, according to David Danner, the commission’s chairman.

Danner says he wants to explore the possibility of power cutoffs but calls it a difficult issue.

Scientists are unsure whether strong east wind events that can drive summer wildfires will become more frequent as broader weather patterns are disrupted. One recent model reviewed by Larry O’Neill, director of climate services at Oregon State University, indicates they will not. But as the planet heats up, the Northwest summers are forecast to become drier, and this can greatly escalate the risk during high winds, according to O’Neill.

Any effort to expand the use of power cutoffs is likely to face strong resistance in some parts of Washington.

Some 60 public utilities and cooperatives that provide electricity operate outside of the utility commission jurisdiction. Many are in rural farming areas, where customers look to a steady flow of summer power to pump water from canals and operate irrigation sprinklers to keep their fields from going dry.

For rural residents with wells, cutting off power may also shut down the pumps that draw water that could be used to fight fire threatening their homes.

“This is about risks – and you are damned if you do and damned if you don’t,” said Jim Smith, general manager of the Klickitat Public Utility District. “This isn’t easy, and we need to have more of a discussion about what, as a society, we should be doing.”

In California, power-line fires burned more than 22,000 structures during the past five years.

The dangers of such fires prompted the California Public Utilities Commission to require the regulated utilities to report fire incidents. From January 2014 to December 2019, PG&E had more than 2,450 ignitions. Most of them were tiny. But some were hugely destructive, including a malfunction that a later investigation concluded touched off the 2018 Camp fire that leveled most of Paradise, California, and killed 86 people.

California investigators concluded that PG&E brushed off warnings about the risks of an aging power-line network, and the utility, in a settlement approved in U.S. Bankruptcy Court, has agreed to pay more than $25 billion to the families of fire victims and insurers.

In Washington state, Danner, the utilities commission chairman, says he has questioned utility executives about the maintenance of their power lines. He said they have assured him that they don’t have the same types of problems as PG&E.

“Of course, I haven’t walked the lines, so I can’t verify that. But I do believe that our utilities are in better shape,” Danner said.

Washington state does have its own history of wind-driven, power-line fires.

In 1991, October winds gusting up to 62 mph triggered 92 fires in Spokane and four other Eastern Washington counties. Those fires killed one person and incinerated 114 homes. More than 90% of these fires were caused by power lines, according to a report prepared by the National Fire Protection Association.

During a 12-year period dating back to 2008, a Department of Natural Resources database – which agency officials say is not a complete tracking of the state’s fires – lists more than 600 Washington power-line fires.

It is still uncertain how many of the other Northwest fires during this year’s early September windstorms were caused by power lines.

Arson is suspected in two of Washington’s largest, the 223,730-acre Pearl Hill fire and the 189,923-acre Cold Springs fire, which claimed the life of an infant. And the sources of some smaller fires will never be determined.

But, already, it is clear that power lines, in some areas, acted like a match to kindling.

Most were small, but the Whitney fire in Lincoln County burned more than 127,000 acres and the Malden fire spread across more than 15,000 acres.

One fire, which flared on the morning of Sept. 7 in the town of Colfax, destroyed two homes, threatened a lot more and drew many Whitman County firefighters.

Then came word of the flames threatening Malden, which forced some Colfax crews to redeploy.

“We have limited resources … and it wasn’t an ideal situation,” said Whitman Emergency Management Director and firefighter Bill Tensfeld, who arrived at Malden by about 12:30 p.m.

By then, fire was advancing on the town in long tongues of flames that spewed out embers more than a quarter-mile through the air. Tensfeld and others then joined the effort already underway by Hokonson, law enforcement and other local volunteer firefighters to roust residents from their homes.

Within about an hour’s time, 80% of the homes in Malden were destroyed along with many other structures, including two century-old barns and a wooden grain elevator 4 miles to the southwest in Pine City.

Some of those whose homes survived are haunted by a kind of survivor’s guilt.

“They come and talk to me and they can’t hold a gaze,” Hokonson said. “If I ask them how they are, they just look away; they’re ready to cry.”

On Sept. 7 and Sept. 8, multiple power-line fires also struck Western Washington in an area of Pierce County served by Puget Sound Energy. East Pierce Fire & Rescue records obtained through a public disclosure request indicate more than a dozen brush and woodland fires flared, with four traced back to power lines and no source determined on the others.

These fires included the Sumner Grade, which destroyed two homes, and the Graham fire, which consumed another five.

They put a big strain on first responders.

Some crews worked for 48 hours straight as they moved from one hot spot to the next, according to Bud Backer, fire chief for East Pierce Fire & Rescue.

At one point, Backer’s crews were spread so thin that they could only dispatch a single paramedic to respond to a grass fire.

“If you look at an ambulance, you know that they don’t have a lot of capability for putting out a fire, but that’s all we had,” Backer said.

Dan Koch, Puget Sound Energy vice president of electric operations, said his utility does not have a plan in place for preemptive power cutoffs. That’s because high-wind events during the fire season have been very rare in the utility’s service area, according to Koch.

“It’s not something that we’re ruling out but we don’t see it as really a practical solution for our service territory given the low nature of our wildfire risk,” Koch said.