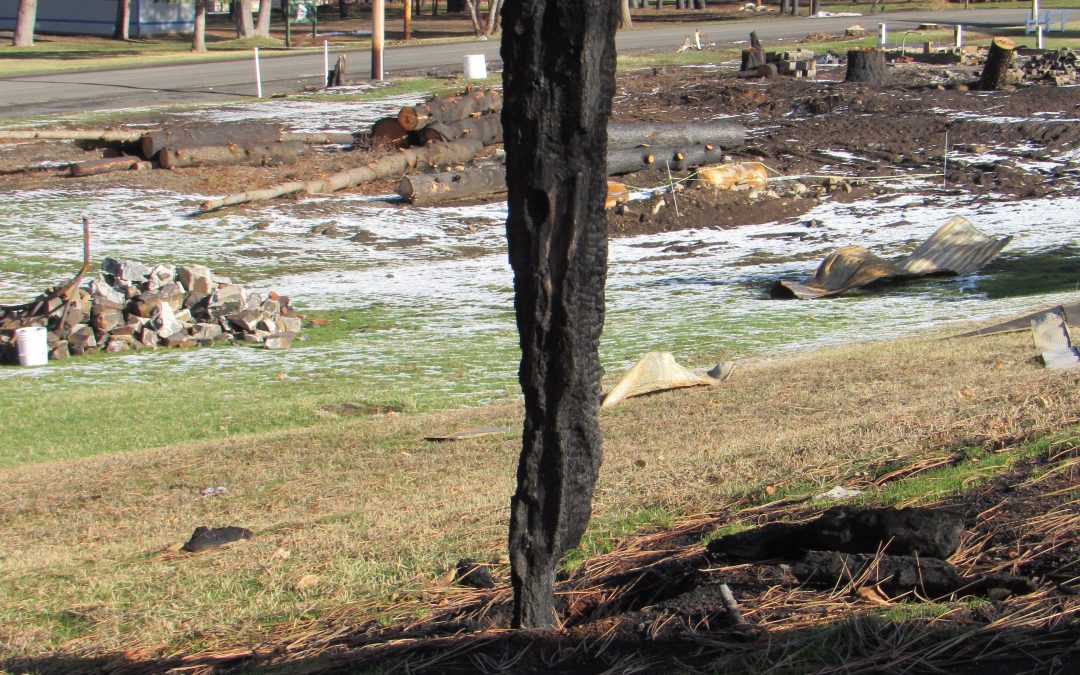 MALDEN, Wash. — This Sunday, March 7, will mark six months since a devastating wildfire destroyed much of two small towns in Whitman County.

A drive through the towns of Malden and Pine City – about 45 miles north of Pullman – reveal stark reminders of Mother Nature’s fury.

Strong winds pushed a fast-moving wildfire through the area on September 7, 2020, with a vengeance.

“It was hell,” said Dan Harwood, Mayor of Malden. “People that were here – it’s very easy to say they saw the devil. The flames go up and over their heads. They saw the firenadoes go through. They saw what – where they were raised – and they knew that there was safety in the creek as a last-ditch effort. And they couldn’t find the creek.”

“And the noise was deafening,” he added.

“This was the perfect storm. It’s in September, our vegetation is dry, our trees have been growing all summer. And everything is ripe,” Harwood told KOMO News. “When that spark hit, there was just not anything we could do – other than get out of the way.”

Now, nearly six months later, there are signs of progress.

Five new homes have either gone up or are being constructed. A temporary mobile building currently serves as Malden’s library and food bank. And by mid-March, crews will start to construct fiber optic lines through town, Harwood said.

“Did you know in the days after September 7th how long and how difficult this recovery process was going to be?” KOMO Anchor/Reporter Steve McCarron asked Harwood.

“I knew that it was going to be very long,” he replied. “The recovery process, Steve, is going to be year’s long.”

Last month, the Biden administration approved federal aid to help rebuild power lines and roads in Malden, Pine City, and other areas of eastern Washington that were burned by fires last year.

In 2020, more than 842,000 acres of land were burned by wildfires statewide, according to statistics provided by the Washington State Department of Natural Resources. It was the most since 2015.

During Labor Day weekend in 2020, dozens of fires broke out on both sides of the Cascades during a 24-hour period. Hundreds of thousands of acres of land were burned.

“It is a reminder to us that Washington state – every year – we keep coming up short when our fire season is upon us because all of the other resources at the federal level and state resources are fully being utilized and deployed, and we can’t get anything,” said Hilary Franz, State Commissioner of Public Lands.

“It’s a reminder that Washington state has got to be more resilient on itself. We have to be investing in the resources in the air and on the ground at our local and state level if we are going to change the trajectory on and prevent these catastrophic fires from getting so large. And if we’re gonna save lives,” Franz added.

Franz is pushing state lawmakers – as part of their new budget – to support House Bill 1168, which would dedicate $125 million to her agency.

Franz says the money would be used to beef up the state’s wildfire response, give communities tools to help prevent fires in the first place, and provide a dedicated funding source to restore more of the state’s forest lands.

“Is it realistic to think that that could come your way given what the state is dealing with from the economic impact of COVID?” McCarron asked Franz during a recent interview.

“So, I know that $125 million a biennium sounds like a lot of money, right? Especially given COVID and the challenges we have economically – given COVID and what it’s done for state revenue. I think it’s important to remind people that $125 million a biennium is small when you think about the fact that we’re already spending every year – over $153 million to fight these fires,” Franz replied.

“We’re already paying for it. The question is – whether we’re going to pay for it to take taxpayer dollars and throw it into the flames and just respond. Or we’re going to take that money and invest proactively to have the resources to get on top of the fires quickly so they don’t get so large, so they don’t have so much cost to our economy, our environment, and to our lives,” Franz added.

For Harwood, the generosity of so many people over these last few months has helped fuel his town’s quest to rebuild.

Faith has played a major role, too.

The fire in September 2020 may have melted the side of the town’s church, which dates back to the early 1900s.

But the building itself and a flag in the center of town are both still standing.

“Our town’s gonna be better because our people will build it better. And with our folks – we will survive and we will do ourselves proud,” he added.

Harwood said donations to the United Way of Whitman County will go a long way to help the people of his town with basic needs.