Why didn’t Malden get the federal aid requested by Inslee? It’s complicated 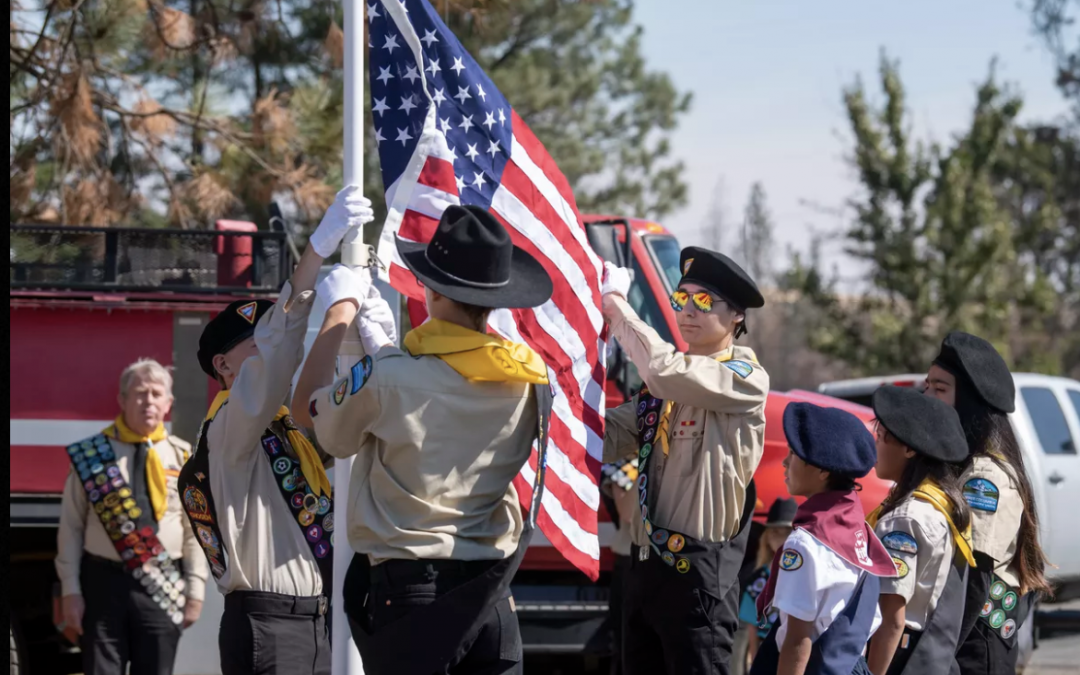 This article first appeared in the Spokesman Review on September 9. 2021. Article by Orion Donovan-Smith. Photos by Jesse Tinsley.

WASHINGTON – After the sun set on Memorial Day, the flag that flew over the U.S. Capitol was lowered, folded and mailed from the D.C. office of Sen. Patty Murray to the mayor of Malden.

Murray, D-Wash., said in a statement at the time the flag was sent to the residents of the Whitman County town, devastated by a wildfire a year ago, as “an acknowledgement of their perseverance and our continued commitment to ensuring the federal government won’t leave them behind.”

Mayor Dan Harwood – driving past the charred remains of the town’s post office in June, where he planned to raise the flag on the anniversary of the fire – said it meant a lot “to have a flag that flew over where our leaders make decisions and set the sights for the future.”

The flag arrived a few days later, but other federal support hasn’t been so quick to reach Malden and neighboring Pine City, where the Babb Road Fire destroyed 80% of homes last Labor Day.

With disasters devastating communities across the country – from wildfires in the West to hurricanes in the East – federal emergency relief has been stretched thin, and the past year in Malden and Pine City has illustrated how limited federal help can be.

On Sept. 16, after state inspectors conducted a preliminary assessment of the fire’s damage, Gov. Jay Inslee formally asked then-President Donald Trump to declare a major disaster, a move that authorizes the Federal Emergency Management Agency, or FEMA, to send aid.

It wasn’t an unusual ask – Trump had declared wildfires in Oregon and California major disasters in the weeks before Inslee made his request. But he ignored the plea for months over a feud with the Democratic governor, despite the Republican congresswoman who represents the area, Rep. Cathy McMorris Rodgers, appealing directly to the president.

“It was like being in a car accident and being told, ‘Hey, the police will be here any minute,’ ” said Scott Hokonson, who has led a community recovery group since losing his home in the fire. “To be left in that state of complete darkness – I don’t have words to describe how difficult that was.”

When President Joe Biden opened the spigot of federal money in February, it was too little too late in the eyes of those involved in the recovery effort in Malden and Pine City.

A major disaster declaration can start the flow of two kinds of federal aid: “public assistance” to help a state or tribe pay for the destruction of public property and “individual assistance” to help displaced residents afford temporary housing and other immediate needs.

Soon after Biden came into office, he approved Inslee’s request for public assistance, but days later FEMA rejected the request for individual assistance, judging the fire’s destruction “was not of such severity and magnitude to warrant the designation.”

Gerry Bozarth, an emergency management specialist with Spokane County who has worked on the relief effort in neighboring Whitman County, said that while individual assistance is notoriously hard to get, approving it soon after the fire “would have made a huge difference in the lives of those affected.”

“It could have provided a lifeline that a lot of these people didn’t have,” Bozarth said. “It would have allowed people to try to pick up the pieces quicker.”

Laurie Holien, director of the Homeland Security and Emergency Management program at Idaho State University, said FEMA’s individual assistance just isn’t designed to replace insurance in towns like Malden and Pine City, where only 40% of structures were insured.

Holien, who previously served as deputy director of Oregon’s Office of Emergency Management, said FEMA determines eligibility for individual assistance through an arcane and somewhat subjective process that makes it hard to know exactly why aid is or isn’t approved.

Some factors the agency takes into account, – such as the concentration of damage and number of casualties – mean a hurricane that hits a city is more likely to warrant individual assistance than a wildfire in a rural area, she said.

Other factors FEMA says it considers include a state’s resources, uninsured property losses, the “profile” of the impacted population and the disaster’s impact on infrastructure and unemployment.

While Holien said all these factors mean that kind of FEMA aid – the individual assistance – is “incredibly rare” for wildfire victims, it isn’t unheard of. On Aug. 25, President Biden approved individual assistance for residents of four northern California counties, including the town of Greenville that was destroyed by the Dixie Fire on Aug. 4.

As of Wednesday, two weeks after Biden declared the fires a major disaster, 101 individual assistance applications had been approved for a total of more than $1.2 million in aid to residents of Lassen, Placer, Nevada and Plumas counties, according to FEMA.

“The individual assistance package would have been very beneficial, and that’s my biggest criticism of the federal government,” Harwood said. “Because these folks definitely could have used it.”

During a July 21 visit with fire survivors in Nespelem, Inslee expressed frustration with how FEMA decides who’s eligible for individual assistance, saying, “We do need the rules to change so that on a consistent basis when there are forest fires, people can get help.”

“FEMA is not required to explain their decisions on it in detail,” Faulk wrote in an email. “The path to getting that aid could be made more clear and consistent generally, which would help in crafting applications.”

“Not every disaster requires a declaration,” FEMA said in a statement released in response to an inquiry from The Spokesman-Review.

“Every disaster is different,” the FEMA statement said. “Numbers alone cannot and do not provide a complete picture of what is needed to help communities recover. FEMA works closely with state, local, territorial and tribal partners to support their response and recovery process, the length of which varies based on the unique circumstances of the particular event.”

When FEMA does make individual assistance available, an NPR investigation found in July, most claims are rejected. Even after filtering out claims it found potentially fraudulent, the agency didn’t approve about 70% of claims in Oregon last year.

Statewide public assistance damages must also exceed $1.55 per person, or at least $10.4 million in Washington and $2.4 million in Idaho, according to spokespeople for the states’ emergency management agencies.

Last December, however, FEMA proposed a substantial change to how it determines public assistance eligibility. The proposal has drawn wide criticism, including from a coalition of state and local governments and emergency managers, who warned in a joint letter in March that the change would “unduly burden” them while dealing with both natural disasters and the COVID-19 pandemic.

Judson Freed, president of the International Association of Emergency Managers’ U.S. council, said that under the proposed change, public assistance “would only handle the major, catastrophic disasters that affect certain parts of the United States, and that’s primarily the huge urban areas on the coasts where they get hurricanes or tornadoes.”

Freed – who also teaches at Idaho State University and serves as the emergency management director for the county that includes St. Paul, Minn. – said the proposal aims to make states less reliant on federal money for disasters they can handle alone, but FEMA put it forward without adequately consulting with emergency managers across the country.

FEMA has not yet said whether it will revise the proposal, but Freed said he has spoken directly with FEMA Administrator Deanne Criswell and was confident she understands emergency managers’ concerns.

In the year since the fire, Malden and Pine City’s representatives in Congress have also worked to help the communities recover and lower the risk of similar fires in the future.

McMorris Rodgers, R-Spokane, introduced the “MALDEN Act” in June, a bill that would prevent a president from blocking disaster aid like Trump did. It also would require FEMA to work more closely with state and local emergency officials, and to send case workers to rural communities when individual assistance is denied.

That bill has yet to gain traction in Congress, but McMorris Rodgers – along with Reps. Dan Newhouse and Kim Schrier – included part of it as an amendment in an infrastructure bill the House passed in July. The provision would make communities affected by wildfires eligible for funds to prevent secondary disasters like mudslides and flooding.

“It’s hard to believe that a year has passed since the Babb Road Fire devastated Malden and Pine City,” McMorris Rodgers said in a statement. “As families and businesses continue to rebuild, it’s clear that more must be done at the federal level to help our rural communities recover. … Never again can we allow for the unnecessary delay in assistance that we saw last year. Each day of delay is another day that a child goes without a roof over their head, or a family member goes without a shower.”

Murray, along with fellow Washington Democratic Sen. Maria Cantwell, worked to include about $8 billion for wildfire risk reduction in the bipartisan infrastructure bill the Senate passed Aug. 10. Murray the third-ranking Democrat in the Senate, also has supported investments in federal projects like the Yakima River Basin Project and Columbia River Basin Project to improve water management and make the region more resilient to drought.

Murray met virtually with Malden residents in April and has worked with the Postal Service to get the town a temporary mailbox until a new post office is built, something Harwood said he expects to happen in 2022. The mayor said federal aid may help with that effort, but the town has sought other sources of funding. Cantwell, as a member of the Senate Small Business Committee, has worked to ensure federal loans from the Small Business Administration are available in rural areas.

While Malden marked the somber anniversary of the fire on Monday, the flag that made its way from the nation’s capital won’t fly over Malden until the post office is rebuilt. The town’s current flagpole, Harwood said Friday, just isn’t tall enough.