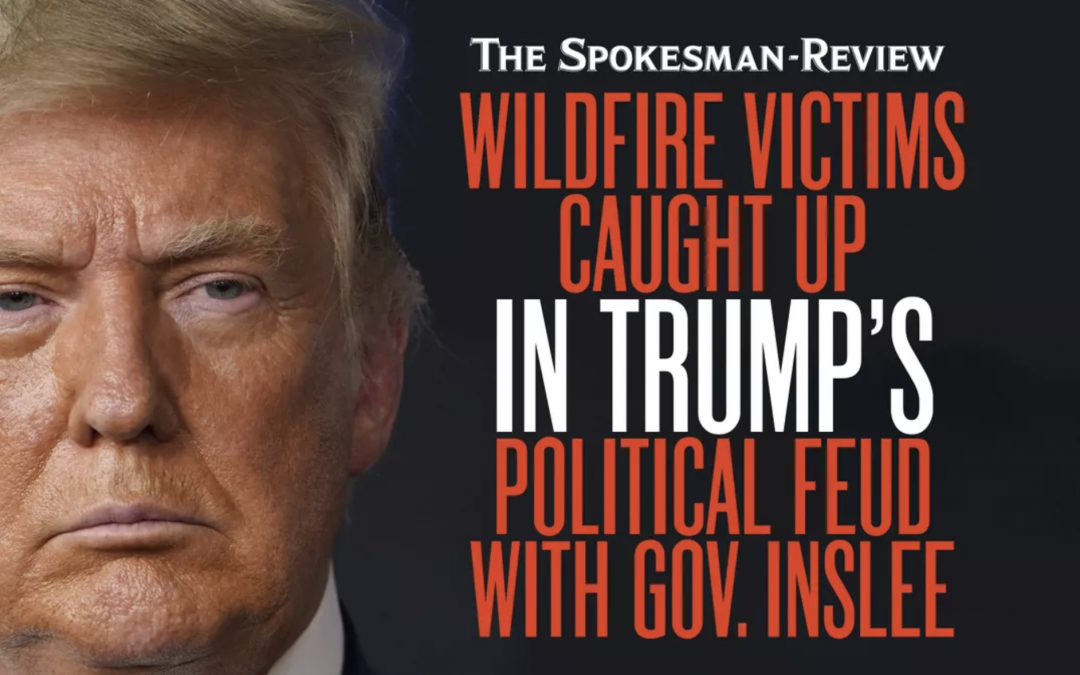 More than four months after a wildfire tore through Malden and Pine City, President Donald Trump is withholding federal aid to help residents rebuild their lives because of his personal animosity toward Gov. Jay Inslee, an aide to Rep. Cathy McMorris Rodgers said.

“The holdup now is the relationship between the president and Gov. Inslee,” said the Spokane Republican’s aide, who requested anonymity to speak candidly. 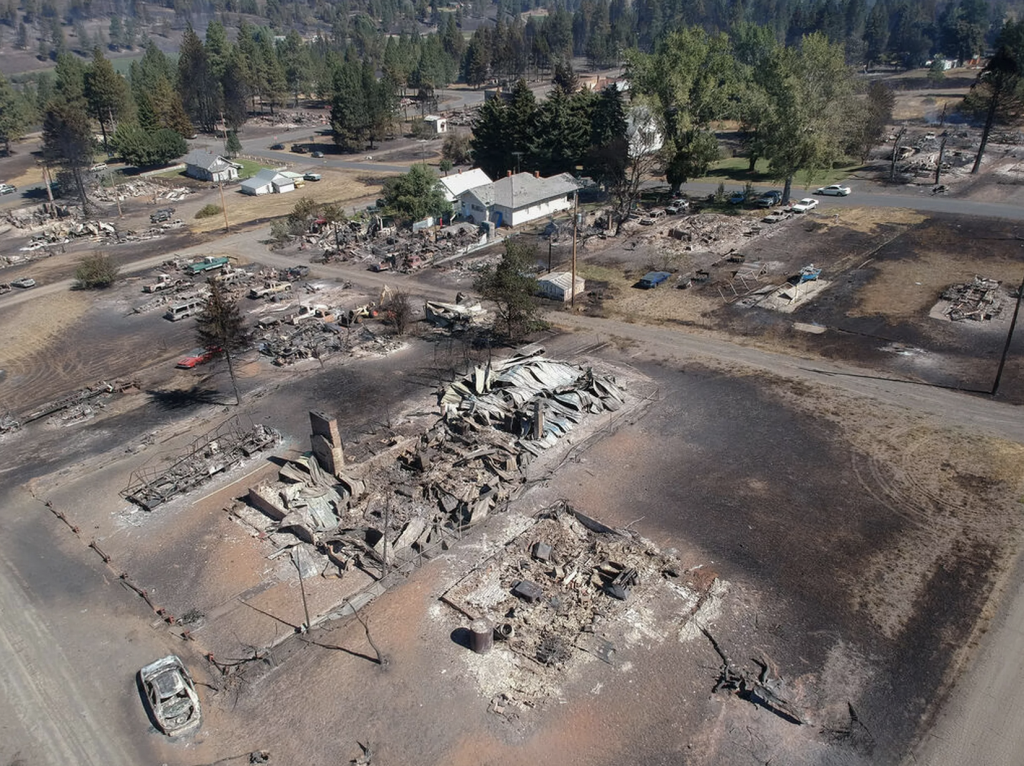 Dozens of buildings smolder on Sept. 8 in Malden, Washington, the day after a fast-moving wildfire swept through the town west of Rosalia. (Jesse Tinsley/The Spokesman-Review)

Trump has approved 21 major disaster declaration requests since the Babb Fire destroyed approximately 80% of homes in the Whitman County towns on Sept. 7, including a request for wildfires in Oregon that was approved in just two days. Other declarations sent aid in the wake of wildfires in California, a winter storm in Oklahoma and hurricanes in several eastern states.

On Dec. 31, McMorris Rodgers sent a letter to Trump, whose term ends Wednesday, bashing Inslee for attacking the president while asking for federal aid to be approved.

“Unfortunately, for the past four years, Governor Inslee has chosen to repeatedly attack you and your Administration, putting his personal political disagreements with you ahead of the people he is supposed to represent,” McMorris Rodgers wrote in the letter, which has not previously been made public.

McMorris Rodgers spoke directly to Trump by phone about the request in late December, the aide said, but the president has yet to either approve or deny it, leaving hundreds of residents of the scorched towns in limbo and Inslee unable to appeal the decision.

“Despite our governor’s bad faith personal vendetta against your Administration, people in my district need support, and I implore you to move forward in providing it to those who have been impacted by devastating wildfires in our region,” McMorris Rodgers wrote.

Trump and Inslee have traded barbs in the past four years over the fires, the COVID-19 response and racial justice protests in Seattle. Trump has called Washington’s governor “a nasty person” and “a snake,” while Inslee has called the president’s denial that climate change has worsened wildfires “a bunch of ignorance.”

The governor’s office said the state’s appeals to the federal government were “based on the facts of the matter.”

Inslee questioned why McMorris Rodgers’ letter takes more aim at Inslee than Trump, who is the one holding up the aid.

“It’s hard to overstate what a distortive, inappropriate and pathetic letter that is,” Inslee wrote in a statement. “It is beneath the integrity of her office. This is not a request for aid; it is an appeal to the president’s ego.”

On Sept. 14, two days before he sent the request for Trump to declare a major disaster for Whitman County, Inslee published an open letter criticizing the president’s “half-baked theories” about poor forest management being solely to blame for the devastating fire season. 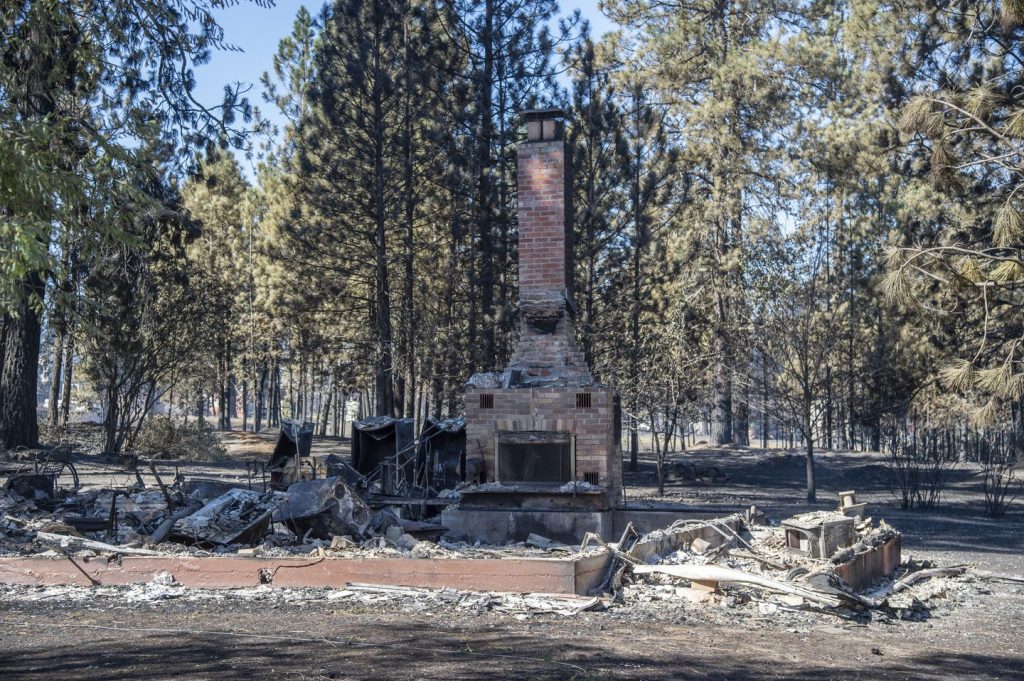 Smoldering remains of one of the many homes burned on Broadway Avenue are seen Sept. 8, the day after a fast-moving wildfire. (Jesse Tinsley/The Spokesman-Review)

Major disaster declarations free up significant federal resources from the Federal Emergency Management Agency and other agencies, including jobless benefits from the Department of Labor. The aid can come in two forms: individual assistance to help with things like temporary housing and other expenses caused by the disaster, and public assistance to reimburse states for costs like debris removal and infrastructure repairs.

FEMA did approve 10 grants to help fight wildfires in Washington between July and September. Those Fire Management Assistance Grants are narrower in scope than individual and public assistance, and cannot be used to rebuild or cover costs for individuals and families.

While FEMA conducts damage assessments and makes recommendations to the White House after receiving a governor’s request, the authority to declare a major disaster rests solely with the president.

After FEMA recommended against approving a request from California’s governor in October, House GOP Leader Kevin McCarthy and other Republican lawmakers from the state lobbied Trump, who overruled the agency’s recommendation and issued a declaration.

On Sept. 16, just days after the fire, Inslee requested individual and public assistance for Whitman County, where Malden and Pine City are located. He expanded the request Oct. 8 to include public assistance for other communities affected by wildfires in Douglas, Franklin, Kittitas, Lincoln, Okanogan, Pend Oreille, Skamania and Yakima counties.

Without a response from the Trump administration, Pine Creek community residents have been stuck, unable to apply for other types of aid, like Small Business Administration loans that become available after being denied for individual assistance from FEMA.

“During the Obama administration, we wanted to move those very quickly,” said Elizabeth Zimmerman, who served as associate administrator for FEMA’s Office of Response and Recovery from 2009 to 2017. “Because, if it’s going to be a ‘no,’ if FEMA is not going to provide assistance, then it opens up other avenues of assistance for those communities to pursue.”

Delays like what has happened to the request for Malden are extremely unusual at FEMA, Zimmerman said.

A governor can also appeal a denial, but Trump’s nondecision has left Washingtonians with little to do but wait and hope the incoming administration of President-elect Joe Biden will approve the request swiftly. A spokesman for the Biden transition team did not respond to questions about Inslee’s request.

A group of local residents formed the Pine Creek Community Long Term Recovery group, which has been working to help fill the gap left by the lack of federal aid, said director Scott Hokonson, who lost his own home in the fire.

While some cleanup has been completed in Malden and Pine City with funding from Washington state, progress has been slow, with most residents uninsured and losing hope, especially when the president they voted for won’t help them, Hokonson said.

“And it’s hard to talk to these people about how it really does sit on Trump’s desk.”

McMorris Rodgers’ letter isn’t the first time she or other members of Congress have pushed Trump to respond to Washington’s request.

On Dec. 8, Washington state’s congressional delegation wrote a letter to Trump and FEMA Administrator Peter Gaynor asking for the request to be approved. This was the third letter by the delegation since the wildfires ravaged Washington over Labor Day weekend.

“It is incredibly frustrating that the Trump Administration has ignored the pleas of the people of Malden, and other Washington state communities that have been devastated by wildfires, as well as the repeated requests from Washington state’s congressional delegation,” Sen. Patty Murray, another Washington Democrat, said in a statement last week.

“The one thing that should be clear to everybody when a tragedy happens,” Sen. Maria Cantwell, D-Wash., said, “is the federal government is there to respond. That’s our job and our duty, and politics should play no role in it.”

The White House did not respond to questions and a FEMA spokeswoman said only that Inslee’s request “is still under review.”

“That is the standard answer, and that is all you would ever hear from FEMA,” said Zimmerman, who reviewed all disaster declaration requests on their way to FEMA’s administrator and the White House during her eight-year tenure.

After a governor requests a major disaster declaration, a regional FEMA office assesses the damage and sends its findings to the agency’s headquarters, which in turn makes a recommendation to the president.

“You can be certain that this has moved from FEMA and it is sitting over in the White House, waiting for a determination by the president,” Zimmerman said. “Once it hits FEMA headquarters in Washington, it would be ready to be moved over to the White House in a matter of 24 hours or less.

“FEMA doesn’t keep secrets. FEMA wants to get these processed, and if assistance is warranted, they want assistance to get out to the people. This is not normal.”

George Haddow, who served as deputy chief of staff at FEMA in the Clinton administration, called the delay “ridiculous” in light of the small population in Malden and Pine City, and the severity of the destruction.

“It’s not hard to do the damage assessments,” Haddow said. “So if you’re four months out and the state has not heard back from FEMA, I don’t think it’s a process issue. Let’s just put it that way. … I have to believe the roadblock is in the White House.”

Inslee’s office said he is “very frustrated” at the lack of response from the White House or any update from the federal government.

“It is stalling recovery efforts, and no reason has been provided,” the governor’s office said. “We are hopeful we will get a better response from the new administration, but that’s no excuse for the Trump administration to continue to sit on its hands for the next week.”

Hokonson said the governor and his office have gone above and beyond to make sure Malden residents have the resources they need, but there is only so much Inslee can do without federal aid.

While Hokonson said he agrees with the intent of McMorris Rodgers’ letter to get Pine Creek community residents aid, he does not appreciate the attacks against Inslee.

“The words and attacks against the governor who has been there for us, who has visited us, who talked to me on the phone personally … are painful and, I feel, misplaced,” Hokonson said. “However, I understand CMR’s intent in a last-ditch effort to appeal to someone she knows personally.”

Malden Mayor Dan Harwood said without “crucial” help from Inslee and Washington State Emergency Management, the town would have struggled to make any progress on recovery efforts.

Harwood said he believes McMorris Rodgers did everything possible to represent the people of Malden.

“She did what she needed to do,” Harwood said after reading McMorris Rodgers’ letter.

“It should be obvious that the reason we have not received our FEMA request is because of a challenging relationship between president Trump and Governor Inslee,” Harwood said. “It’s nothing that is a big secret.”

While the cause of the delay is obvious to Harwood, that doesn’t make it any less difficult to see his neighbors struggling.

Last week. during the windstorm that caused 100,000 households to lose power in the Spokane area, Harwood said his phone lit up at 4 a.m. full of texts from people asking, “Are you guys OK?”

The wind was blowing the same direction it did the day of the fire, Harwood said. But this time, instead of sitting in their homes, many Malden residents were in RVs on their burned-out properties.

“These people should have been in FEMA-approved winter housing and because of a lack of action they were in RVs,” Harwood said. “That upsets me and that scares me.”