After losing everything in the fire, 90-year-old Malden man moves into donated home 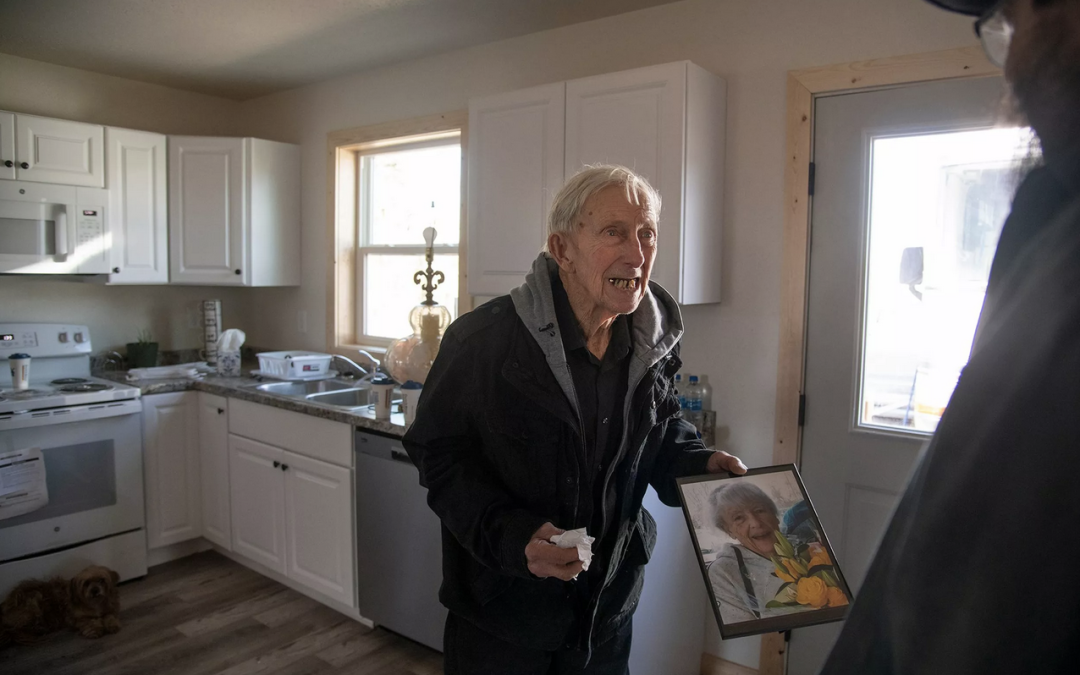 This article first appeared in The Spokesman Review on March 10, 2022, By Emma Epperly .

Sun poured through the windows of a nearly empty house as 90-year-old Jim Jacobs, tears in his eyes, looked around in awe.

He finally had a home.

It had been 548 days since Jacobs loaded his wife, Joy, 97, into their blue minivan and sped away from the flames engulfing their Malden, Washington, home.

The Babb Road Fire destroyed some 120 homes in Malden and Pine City, leaving the community at the northern edge of Whitman County devastated. With only 40% of the structures lost insured, many people, like the Jacobses, were left without a safety net.

Just a few weeks after the fire, the couple returned to the burned-out piece of land that had been their home for the past 20-some years. Joy, who had already been struggling with dementia, was so devastated by the loss that “she just gave up,” Jacobs said.

She died less than six weeks after the fire.

In the time since, Jacobs has had one focus: rebuilding Joy’s house.

That dream finally came true Wednesday, when he officially moved into a house built by a group of Amish and Mennonite missionaries from St. Ignatius, Montana. The money came from donated funds to the Red Cross.

“This house was built with loving hands and it’s going to be maintained by loving hands,” Jacobs said with tears in his eyes. “This house is Joy’s house. I’m the caretaker.” 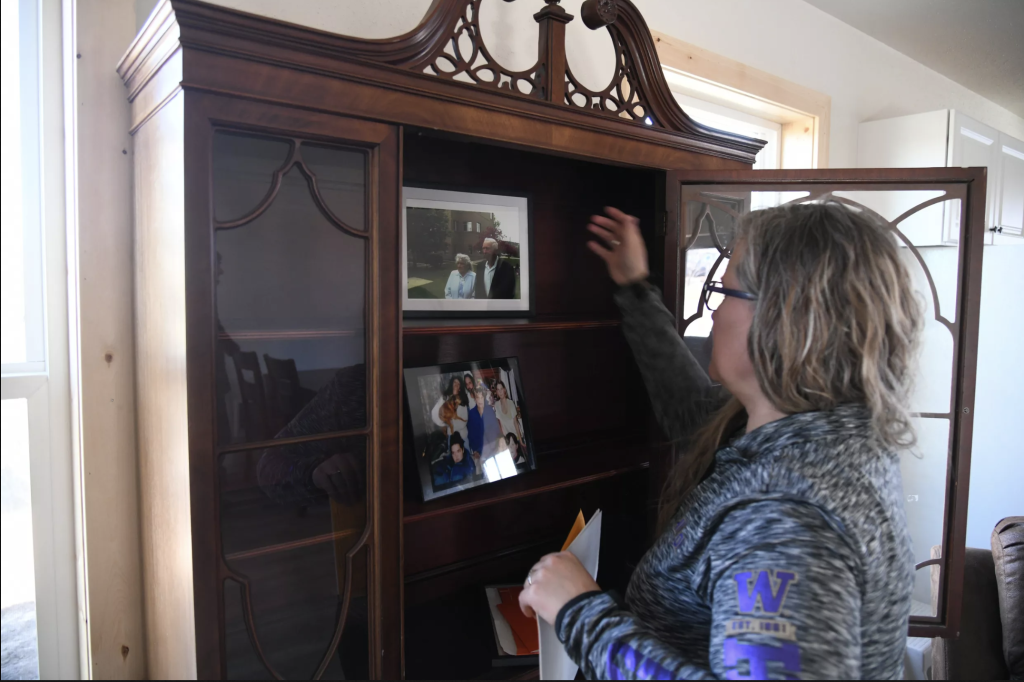 Social worker Kim Maxfield puts photos of Jim Jacobs and his wife Joy onto shelves at Jacobs; new house Wednesday, Mar. 9, 2022 in Malden. Jacob lost his home in the Labor Day 2020 fire and. his wife died just a few days later. A missionary group from the Western Anabaptists built Jacobs’ house for free. Maxfield works for the Masons group in Spokane was was trying to help Jacobs decorate his hew house. (Jesse Tinsley/The Spokesman-Review)

Late last year, the Western Anabaptist Mission Service offered to build houses for Malden residents. Jacobs was one of the first on the list. Construction began Jan. 3, and the homes were completed in just seven weeks.

The group’s goal is to be “the hands and feet of Jesus” by donating their skills as builders to communities in need, Chairman Toby Yoder said. The group was founded in 2013 and has built dozens of homes since then for people and communities in need.

They had finished two homes in Malden in March 2021, and returned this year to build six more.

After finishing construction two weeks ago, Yoder and a group of mission service members returned Wednesday to bless the homes and officially give Jacobs the keys.

The men piled into the house, a teary-eyed Jacobs greeting them.

Unable to stand idle, the group quickly got to work peeling stickers off the home’s 11 new windows, installing a last-minute vanity and fixing little odds and ends.

It’s “by far” the best day of the entire process, Yoder said as he watched Jacobs pace around the home. When every finishing touch was completed, Jacobs signed on the dotted line and he was officially home.

Making a house a home

Kim Maxfield pulled up to Jacobs’ house Wednesday morning with cups of coffee and a trailer loaded with furniture. Maxfield, a case manager for Masons Care, the branch of Washington Masonic Charities that supports the elderly, has been with Jacobs since the beginning.

She came to Malden hoping to help where she could and found Jacobs and his wife struggling. Since then, she has supported Jacobs, helping him advocate for himself and making sure his basic needs are met.

The lead-up to move-in day has been busy for Maxfield, who worked with Jacobs’ disaster management caseworker to try and secure funds to furnish the home.

She even took Jacobs furniture shopping last month to see what he might like, a challenge after half a century of Joy taking care of the decorating.

The two most important things to Jacobs were finding a secretary desk and hutch just like Joy’s, where he could display china and other trinkets similar to what Joy had before the fire.

Maxfield and Jacobs found just the two pieces at Owen’s Auction on the South Hill. On Wednesday, Jerry Collins, a member of the Spokane Scottish Rite, quickly began unloading the new pieces.

Jacobs insisted the large hutch would fit between his living room windows without even measuring.

“I don’t have to, I have precision eyeballs,” Jacobs said.

Sure enough, the hutch fit. A lifelong craftsman, Jacobs said he’s thrilled with the workmanship of his new home.

“I feel wonderful,” Jacobs said as he looked around the house.

Maxfield was able to secure a few pieces of donated furniture, but the home remains largely unfurnished. Jacobs isn’t worried, though; he said he has plenty of time to get things just right.

While he still doesn’t have a bed, or dresser, or pots and pans, he’s in awe that he made it this far after more than a year of living in an RV.

Maxfield pulled out photos of Jacobs and Joy to adorn his first two pieces of furniture.

Jacobs tearfully showed the missionaries a photo of his wife before telling each person how thankful he is for what they contributed to making his dream a reality.

“You did a wonderful job. Words can’t describe,” Jacobs said. “I’ve seen miracles in my life, and that’s a miracle.”

The Jacobs family has set up an account at STCU titled “Joys Home Restoration Fund” where donations can be made.

To learn about the Malden Recovery Effort or to make a general donation visit pinecreekcommunityrestoration.org