Full Circle: Malden mother and daughter give back to community after losing home in fire 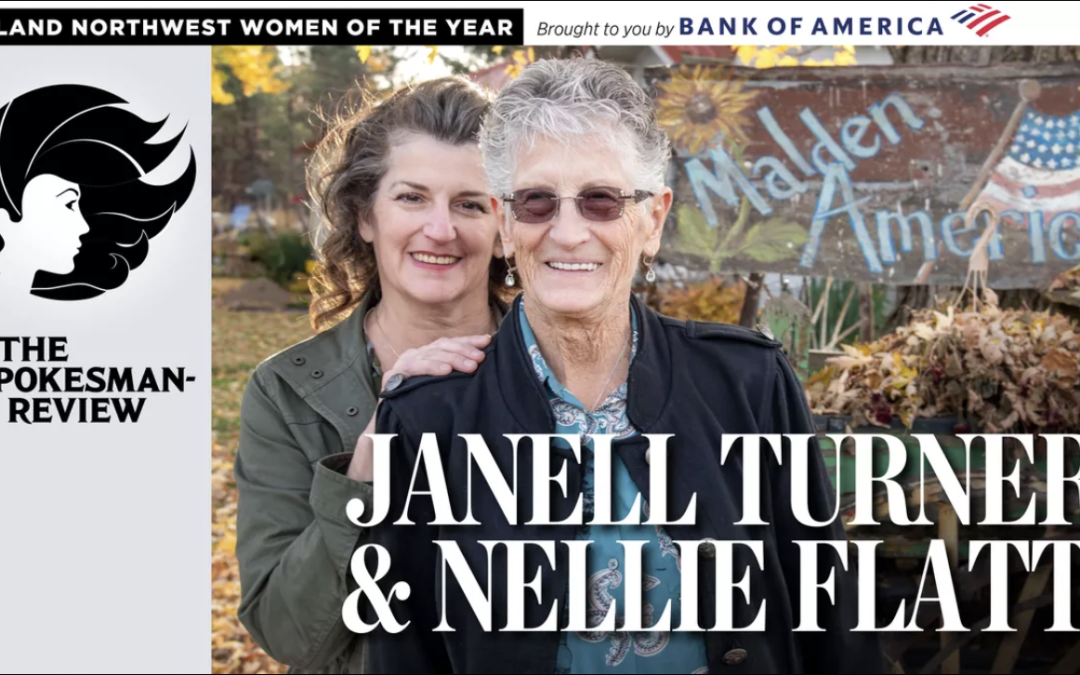 The road leading into main street in Malden, Washington, looks almost normal at first glance, with a row of old weathered homes with full garden beds standing on one side.

But on the other side are burn-scarred divots where similar homes once stood.

Nellie Flatt, 82, knows life on both sides of the street. She first lived in a home that’s still standing. After her husband died, she bought the house across the street and turned the upstairs into a sewing room where she created her elaborate square-dancing ensembles.

Flatt’s daughter, Janell Turner, 58, moved into the first house across the street. Life was good for the mother-daughter duo: Turner managed a physical therapy office in Spokane and Flatt volunteered at a local thrift store and went square dancing on the weekends.

Then came the fire.

Flatt lost all of her treasures in just a few hours.

While many people might be devastated, Flatt and Turner instead rallied around others, stepping up to meet their neighbors’ needs and become leaders in the recovery effort.

Hank Cramer, contractor for Washington State Emergency Management, first met the mother-daughter duo shortly after the fire and was impressed with their selflessness.

“They made it clear from the start that they would neither ask nor accept help for themselves. They wished only to help those less fortunate than themselves,” Cramer wrote when nominating them for Women of the Year. “A year has now elapsed from that terrible fire, and they have proven true to their words.” 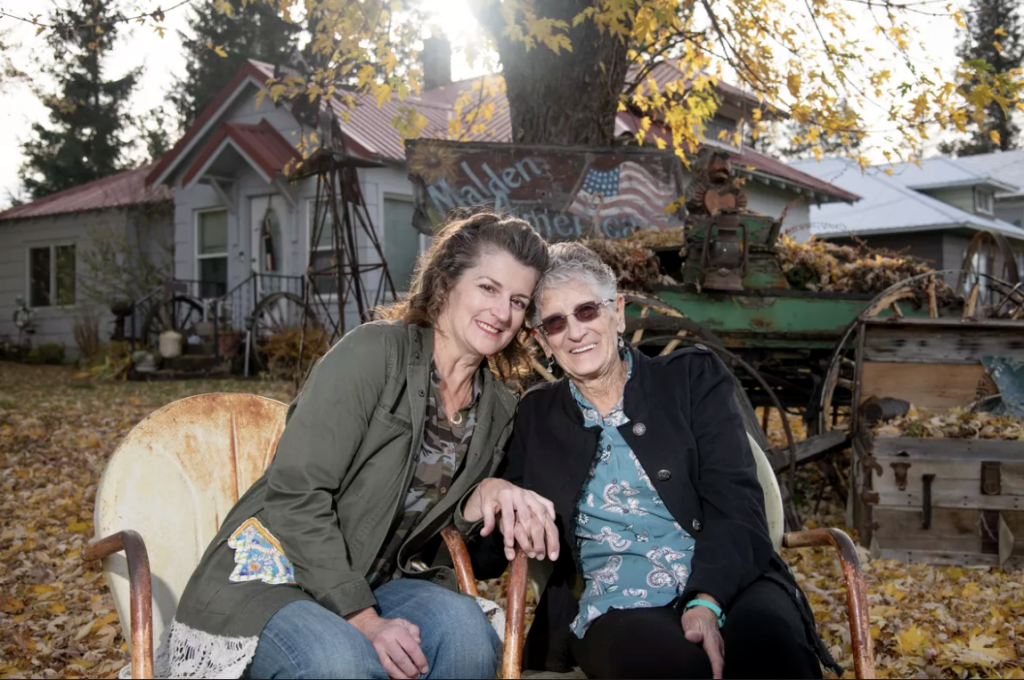 It will all work out

Flatt grew up in Clarkston and lived there most of her life. She got married shortly after her 18th birthday and had her first child 10 months later. The babies just kept coming; over the next decade, Flatt had six more children.

The four boys and three girls kept her busy. When the youngest headed off to school, Flatt divorced. She decided to get a job.

Flatt wanted to keep an eye on her children, so she found a job as a school bus driver. She was just the second woman to drive a school bus in Clarkston, Flatt said.

“She was like the one that coaches wanted to have them take on a trip because they knew that they were safe,” Turner said. “She was competent, she could handle anything, the stress level didn’t matter.”

Flatt quickly struck up a friendship with Bob Flatt, who managed the school bus garage. They soon married.

“He was heaven-sent,” Flatt said of her late husband.

In the early 1990s, the Flatts retired and moved to Malden. They paid off their home and traveled as Bob played with the Banana Belt Old Time Fiddlers. Nellie Flatt often sang with the group.

By this time Turner, the fifth of Flatt’s seven children, had graduated high school and started running a bakery in Lewiston. In the mid-1980s, Turner got pregnant with her daughter Tiffani.

The first months of Tiffani’s life were a whirlwind with a slew of serious medical conditions that eventually let to diagnosis of a rare form of muscular dystrophy. Doctors told Turner her daughter likely would only live for a few months. Even with the grim prognosis, Turner was determined her daughter would live life to the fullest.

“I took the bull by the horns and took care of her,” Turner said.

Flatt was right by her daughter’s side, supporting her every step of the way.

“She made my life possible,” Turner said, looking at her mother with tears in her eyes. “My dream come true – to be a mom.”

Tiffani was able to go home on a ventilator and became one of the most active ventilator patients in the United States, even swimming with the device helping to breathe for her. She died at age 13 in 1998 from complications with her condition.

The experience of caring for and parenting Tiffani was life-changing for Turner.

She began managing the Spokane Sports and Physical Therapy office where she could help inspire patients to live their best lives, just like she had done for Tiffani.

The patients Turner likes best are the difficult ones, who need extra support to make it through their rehab program.

“My favorites are the grouchy ones and I can break through to them and get them to smile and be happy to come,” Turner said. “If they’re happy to come, then they’re going to buy into the program and help me get them well.”

Turner may have learned her love for turning around even the worst of attitudes from her mother.

They asked her if she wanted to work there and Flatt, who was already wondering what to do with her time, said yes.

The store has everything from books to toys to baking sheets and everything in between, all priced well below second-hand shops in Spokane. Volunteering was a chance for Flatt to brighten people’s day and connect them with much-needed household items.

Flatt greets each customer with her big smile and caring demeanor. Chat with her for more than a moment and Flatt will slip in a well-timed joke that disarms even the grouchiest of customers.

Joking with customers and “getting them excited about life,” is Flatt’s favorite part of the job, she said.

“She’s the best personal shopper you can ever imagine,” Turner said.

After the ashes cooled, it quickly became clear how devastating the fire truly would be for Malden and nearby Pine City residents. The vast majority of residents were either uninsured or underinsured, federal aid was delayed for months, and damaged and outdated infrastructure made rebuilding difficult.

Flatt moved back into her old house, with her daughter. Turner immediately did whatever she could to help her mother, but as the weeks dragged on it became clear that stabilizing the town would help Flatt. So Turner submitted a letter of interest for an opening on Malden town council.

“When this all first happened, we were determined to rebuild for her,” Turner said. “And this was her town.”

Then a group of neighbors organized the Pine Creek Long Term Recovery Group, a nonprofit set up to help support residents and the town through the recovery and rebuilding process. Turner joined the board and quickly became a person who was looked to for sound advice.

The year after the fire was full of ups and downs, with pushback from many townspeople on the recovery process. For Turner, that controversy has been an unpleasant but necessary part of shaping Malden’s future.

“If we’re going to bring it back, let’s do it right,” Turner said.

She hopes to prevent Malden from returning to a “junk town” of lots littered with trashed cars and junk piles . With each vote, decision or discussion, Turner said she can feel herself making a difference.

Residents are often angry at many meetings, leading to intense and uncivil confrontations, Cramer said. Somehow, Turner is always the calming voice that emerges from the discourse, he said.

“The thing that impresses me the most is her ability to smooth and calm a conflict – sometimes deep-seeded personal conflict,” Cramer said.

Turner will take control of the conversation and remind everyone they’re working to a common goal.

“It feels really good to know that my input is a part of the rebuilding,” Turner said. “I’ve realized that I’m a lot stronger than I thought.”

For her part, Flatt has become the star volunteer at Malden’s food bank. She went into the food bank one afternoon and saw that it was understaffed.

“I just went down there one day and off the cuff I just started helping him and what have you,” Flatt said.

After an afternoon of chatting with townspeople and helping them shop, Flatt asked if she could come back.

“I’ve been there ever since,” she said.

The help was welcomed by Bob Law, who runs the food bank and said help was sorely needed.

“For a woman that lost everything in a fire, she came back with so much to give and wanted to help people when there’s a lot of things she needs help with herself,” Law said.

Flatt’s welcoming demeanor is a huge factor in making residents feel comfortable coming to the food bank. She greets them, opens her arms for a hug, and then begins subtly pushing and extra item here or there on customers like only a grandmother can.

Visiting the food bank has turned into a social event thanks to Flatt, Cramer said.

“People look forward to coming down to the food bank on Wednesday afternoons because it’s a social event,” Cramer said. “It can be a very humbling and demeaning thing if you don’t have a Nellie there.”

Flatt doesn’t think much of what she does for other people, but instead how helping others gives her joy.

Flatt and Turner said volunteering so much of their time this past year has been healing.

“You’re giving, but in giving it makes a full complete circle and comes back to you and fills you up,” Turner said.