Leaving Malden and looking to the future, young couple gets married and saves for home to start a new life

This article first appeared in the Spokesman-Review on September 12, 2021. Article by Emma Epperly Photos by Jesse Tinsley.

Music drifted over a Spokane Valley backyard as Sage Butler walked down the stairs in a gown, smiling at her fiancé, Jason Hoover, who tearfully looked back at her.

The couple married last month, with their 10-month-old daughter cooing in the front row. 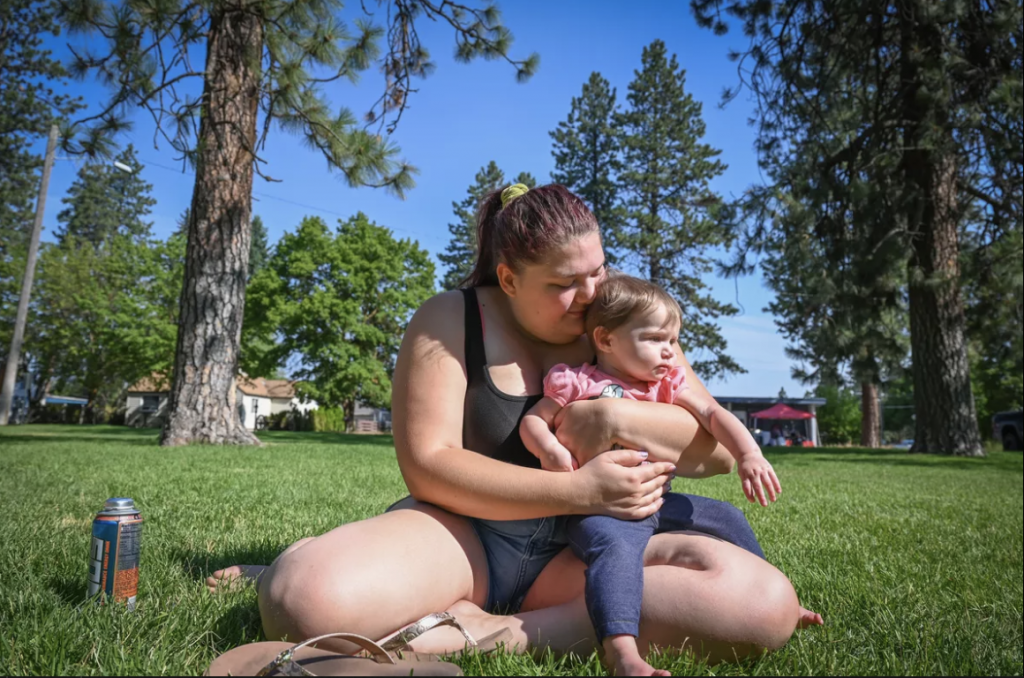 Sage Butler nuzzles her baby, Clara Jean Hoover, in Edgecliff Park in Spokane Valley Thursday, July 22, 2021. Butler, who was pregnant and living in tiny Malden, Washington when the town burned on Labor Day 2020, destroying their family home and all their possessions. She and fiance Jason Hoover are living in a fifth-wheel trailer and planning their wedding for August of this year. But they’re still in limbo about the future of their lives. In the past year, little Clara also survived thoracic surgery. (Jesse Tinsley/THE SPOKESMAN-REVI)

The special day was a celebration of all the young couple overcame during the past year, including their home burning to the ground in Malden, Washington, and their infant daughter, Clara, having surgery on her lung.

Butler and Hoover were excited when they found out they were expecting in January 2020. They were living in the small town of Malden, where Butler had moved with her father in middle school.

Her father, Jason Butler, died when she was 15. She lived in their Malden home by herself, with her grandparents nearby to keep an eye on her. Butler graduated high school, became a certified nursing assistant and got a job at Tekoa Care Center, where she met Hoover.

They fell in love and started building a life together in the big two-story corner house with a large yard that Butler inherited from her father.

During her pregnancy, Butler endured severe nausea and vomiting and was eventually diagnosed with hyperemesis. She stopped working to stay home and rest. Then doctors found a cystic abnormality on the baby’s lung that could cause complications. Despite all the struggles and fears, the couple were excited to become parents.

Then Sept. 7, 2020, arrived. Winds snapped a tree branch into an Avista power line, according to an investigation by the state Department of Natural Resources. Flames ignited and fire rushed through the Palouse toward Malden. In just a few hours, the couple’s home, their family heirlooms and everything they had stored for the baby burned.

Butler was eight months pregnant without a single baby bottle or diaper, let alone clothes for herself and her fiancé. Family and neighbors pulled together to help them buy an RV. They parked at the KOA in Spokane Valley and the small camper quickly filled with donated baby items.

Clara was born Nov. 9, a happy and healthy baby girl.

The couple spent the next few months adjusting to parenthood living in the RV before Hoover went back to work. He got a job at an auto parts store on the South Hill. With money coming in, the couple began saving for a house.

Then his truck broke down and the couple couldn’t afford to fix it. Butler and baby Clara were stuck at the RV park while Hoover worked. Butler’s grandmother loaned her a car temporarily, but the $7,000 repair bill on the truck loomed.

Their disaster caseworker stepped in and found donations to help pay for the repair, another reminder of the community that gathered around victims of the fire that destroyed most of Malden, Butler said.

At 6 months old, doctors decided it was time to remove the cystic abnormality from Clara’s lung. The thought of their infant daughter undergoing such a surgery terrified Butler and Hoover.

“Before her surgery was over, he was like, ‘I need fresh air,’ ” Butler said of Hoover. “So we went out to the parking garage and sat in the car, and he just started crying and he was like, ‘She needs to be OK.’ ”

Clara made it through the surgery without complications. She spent 24 hours in the pediatric intensive care unit before moving to a regular pediatric room.

Butler stayed with Clara in the hospital, chatting with the nurses and watching her baby breathe. It was a tough time for the new mother, particularly after the tube was removed from Clara.

“She sounded so rough when she tried to cry,” Butler said. “It was heartbreaking.”

State health insurance covered the cost of Clara’s surgery, Butler said. Not long after, the couple moved from the spacious and treed KOA to the pavement pads at Trailer Inns.

Living in the trailer, Butler said, has helped to keep costs down so they can save for a down payment on a house, where Clara can have her own bedroom and the couple’s dogs can play outside.

That dream likely won’t be realized in Malden.

Recovery efforts have been slow, and with a FEMA Individual Assistance denial, Butler said there hasn’t been much help to get them back into more permanent housing. Butler and Hoover applied for Small Business Administration loans but were denied due to low or lack of credit.

“Some people are getting denied because not enough income,” Butler said. “It’s Malden – it’s a town full of disabled people and retirees.”

Even people who got approved for loans, like Butler’s grandmother, were surprised to find significant stipulations.

“It’s like, really, you’re gonna put stipulations on a loan for someone who has lost everything?” Butler said.

With so many difficult memories in Malden, they decided to move on.

The first step to creating that new life was getting married on Aug. 4. The couple decided on a simple backyard wedding at the Spokane Valley home of Butler’s adoptive father, Ray Landry.

Butler picked an open-backed dress that framed the tattoo between her shoulder blades in honor of her late father. Hoover’s mother, Amyan Beaver, performed the ceremony.

The wedding was their triumph, a testament showing how hard Butler and Hoover have worked.

As Butler walked down the aisle, Hoover’s eyes watered. Minutes later, when he said his vows, he couldn’t fight back tears any longer.

“This gift of marriage is amazing, and the love between these two is inspiring,” Beaver said. “ Sage and Jason have conquered so much, but together they’ve won so much more.”