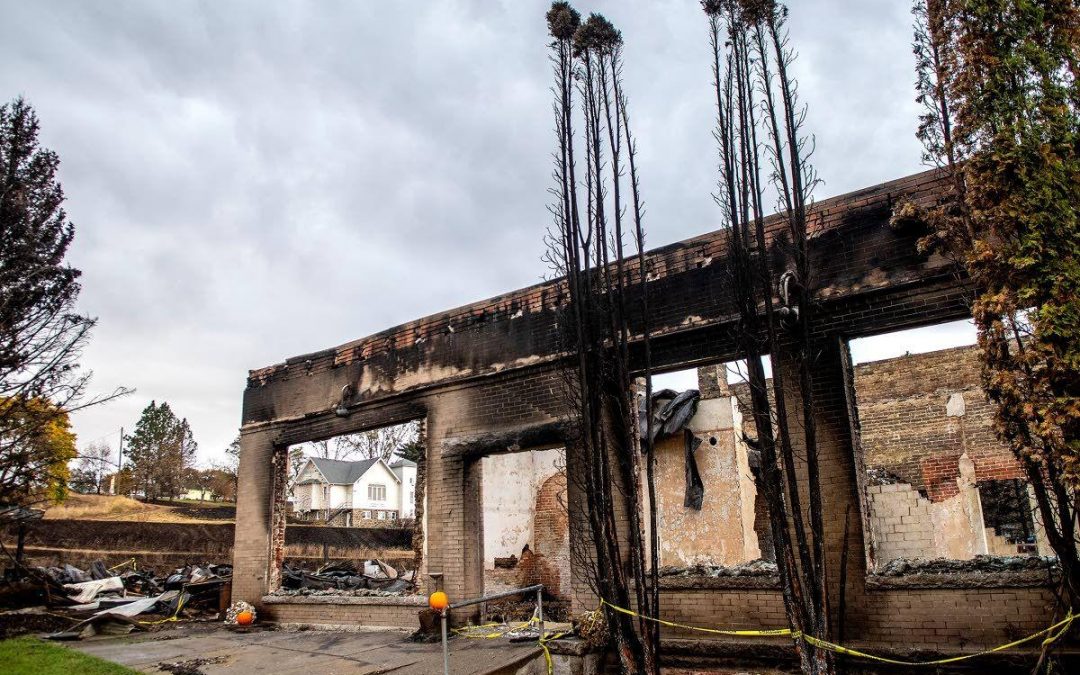 First published in the Lewiston Tribune on January 2, 2021. By Elaine Williams.

Linda Pritchett’s involvement in the relief effort for Malden fire victims began at 7 a.m. on a Tuesday less than 24 hours after the catastrophe.

Her cellphone rang, and a stranger on the other end of the line wanted to know how his employer could donate. As new as the crisis was, the caller had already figured out that Pritchett was the secretary and treasurer of the Rosalia Lions Club, one of the most prominent civic groups in the incorporated town closest to Malden.

Pritchett, who lives along Babb Road where the blaze began, didn’t have electricity or water. The fire had cut the power that runs the well that serves her house.

Yet she realized the call was the start of what would become a flood of money, food and new and used household goods that might go to waste if a group didn’t take charge.

What she and six other club members did in the following hours, days and weeks funneled almost $80,000 in aid to 131 households for 293 adults and 72 children in Malden and the surrounding area.

“Everybody wanted to help, but it was such an overwhelming task,” said Pritchett, who, like the other volunteers, had no disaster relief experience. “We had to get organized.”

The first week after the fire was chaotic in Rosalia in northern Whitman County. Fire victims were sleeping in tents on people’s lawns and in the pews of churches, where in many cases church members were cooking meals and providing other services.

The pandemic made it a little easier to mobilize. A dental assistant, Pritchett was in between jobs. She hadn’t decided if she would accept an offer to join her former employer in his new position at a corporate clinic after closing his private dental practice because of the coronavirus.

Rosalia’s community center didn’t have any events booked because of COVID-19, so the town’s city council gave the Lions Club permission to use it for free as a place to accept and distribute contributions.

Following the advice of an attorney, accountant and not-for-profit consultant, they put together a way for companies to make tax-deductible contributions. They also created a form for fire victims that allowed volunteers to assess needs, track what was given and weed out a handful of scammers.

“You needed that structure behind you to make sure you’re doing things right and the knowledge of professionals who know what they’re doing,” Pritchett said.

They opened at the community center and were there every day for at least 12 hours for about two weeks.

Emotions ran high. Every person was at a different stage in handling whatever loss they had experienced in a situation Pritchett said is difficult to comprehend for people who weren’t there.

“The first 48 hours, these people were in total shock,” she said.

Some had fewer than 10 minutes to prepare before they fled, often amid flames so intense they melted the paint on cars.

One man was seen walking down the street wearing only his underwear, then seemed to have disappeared. It was weeks before it was established that a neighbor had given him a ride and he eventually ended up safely in Spokane.

“There was one family that had a brick home, and their house still burned down to the ground,” Pritchett said. “They had a good defensible space around it. The embers were flying that far.”

More than one fire victim tried to convince Lions Club members not to help them. One of them was a woman who left her home without her purse, identification or a single change of clothing. But she felt she wasn’t deserving of aid since the fire had spared a camper trailer, giving her and her husband temporary shelter while they waited for insurance money.

On the other extreme were a few people who became so belligerent Lions Club members had to call law enforcement. All of them were individuals who didn’t qualify for help because they hadn’t lost anything in the fire.

The needs were all-encompassing and constantly changing. At first, it was basics such as food, clothing and medical supplies like walkers and dentures to replace ones that had been left behind in the race to escape the fire.

They did a lot of problem-solving, realizing for example, they could give out quarters and mini-bottles of detergent so fire victims could wash clothes in laundromats.

Then it shifted to supplies needed for the cleanup, such as buckets, boots and shovels. In one instance, the Lions Club bought a garden hose for every family. The town was turning the water back on, and each house needed a hose for the municipality to test it — but no one had one.

“We kind of became almost a security blanket for people,” Pritchett said.

Soliciting, accepting and rejecting items turned out to be more complicated than she anticipated.

The generosity of people from all over the country was humbling, she said. One envelope arrived with three dollars in cash with no return address from the state of New York, which Pritchett said, made her wonder if that was the donor’s last money.

“We were sending out different lists to different media outlets, because we didn’t want to end up with 10,000 razors,” she said.

The club turned away someone who arrived with two trailers full of goods since they didn’t have anywhere to put them.

In other instances, they found places that needed items that might have otherwise gone to waste, such as stained or torn linens that went to animal shelters.

After the initial push, the club gradually reduced the hours at the center, closing altogether in mid-November and boxing up what was left for the Arc of Spokane, a charity that hauled it away last month.

Residents of Malden and its outlying areas still need help, but that goes beyond what the volunteers at the Lions Club are equipped to do, Pritchett said.

Mental health counseling, she said, should be a big component of what is offered going forward.

“This is going to be a real trauma on these people’s lives for many years to come,” she said.