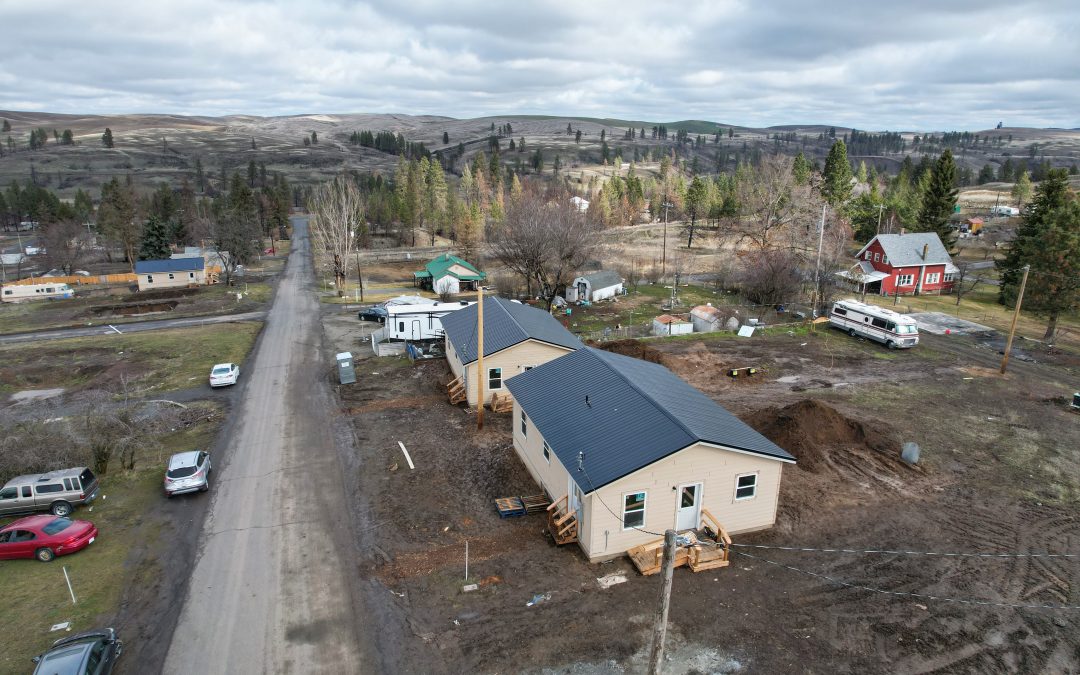 Mayor Dan Harwood has one word to describe what it was like to watch the Babb Road fire devour the town of Malden.

Harwood said he started filling water trucks and going door to door to get people out. We stand near the charred ruins of a house not far from the ‘Welcome to Malden’ sign.

“When you’ve got 50 mile an hour winds to 70 hour winds blowing a mile wide plus fire, there’s not much anybody can do.” 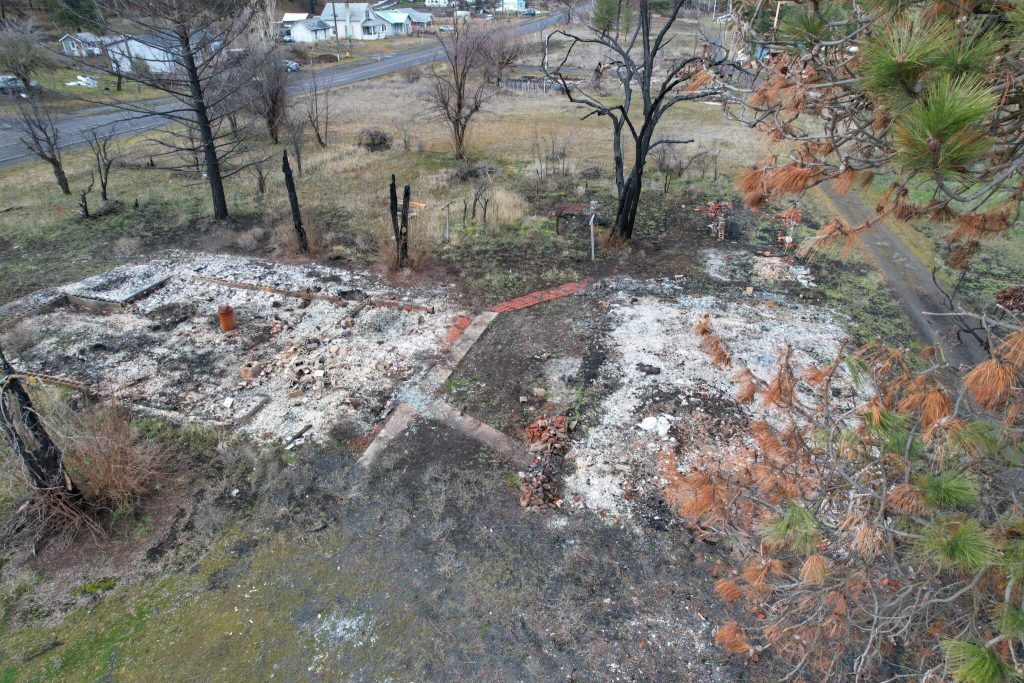 Charred remains of a house in Malden, Wash./ Photo by Geoff Roth

It’s now been almost two years since the fire, and Harwood says Malden is recovering, thanks to a multitude of volunteers and organizations.

A grant from the Red Cross helped fund the building materials. After inspections are done in the next two weeks, residents will be able to move into their new homes.

Harwood says the six homes built by the missionaries are free of charge to Malden residents who lost their homes. 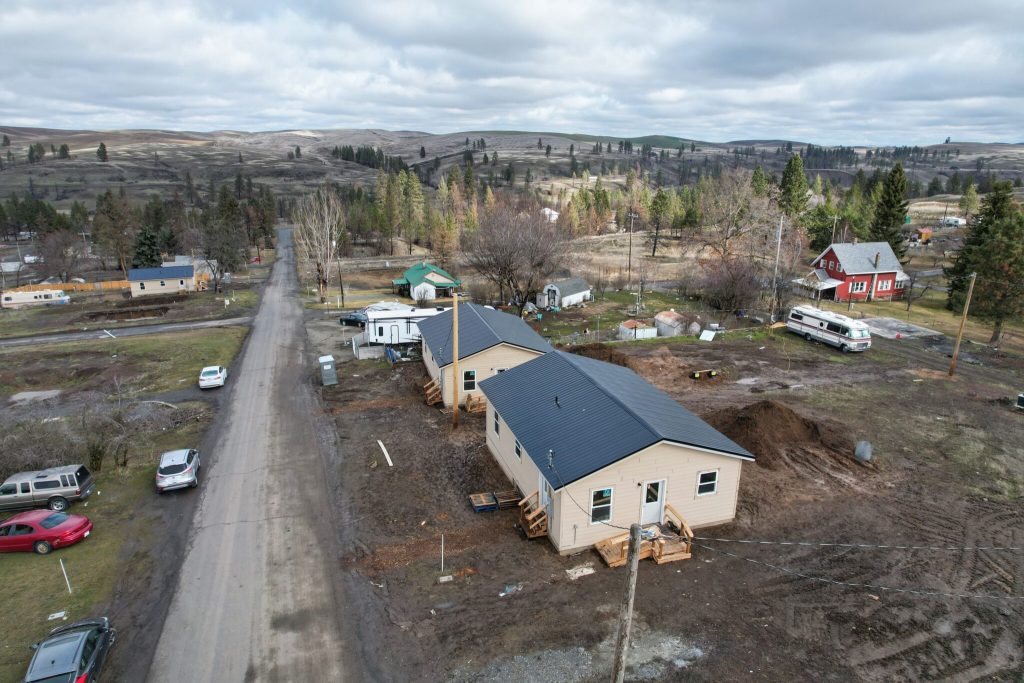 Other residents have opted for modular homes, and are still waiting a year or more due to supply chain issues. Many residents are currently living with friends, in apartments, or in RVs. Out of 67 houses lost, Harwood says 18 have been rebuilt.

Gerry Bozarth with Spokane County Emergency Management, has been helping the community of Malden navigate their recovery process. He said, unfortunately, recovery work can be slow.

“And we’ve just got so many factors, you know, we’ve had the COVID situation, we had the delay in federal assistance, we had, you know, weather issues….”

Bozarth said many residents didn’t have the resources to build back. Those that did had to compete for a small pool of construction workers, hampered by a lack of building materials.

“It was really, unfortunately, the perfect storm.”

Despite the challenges, Bozarth said he’s seen a lot of progress thanks to the support of so many communities across Washington.

“And then other organizations from outside the state have been really instrumental in giving, you know, those residents hope that their town will be okay.”

Mayor Harwood and I make our way to the single wide trailer currently serving as city hall.

A large colorful map sits on a stand just inside the door. Harwood points out some of the planned improvements. 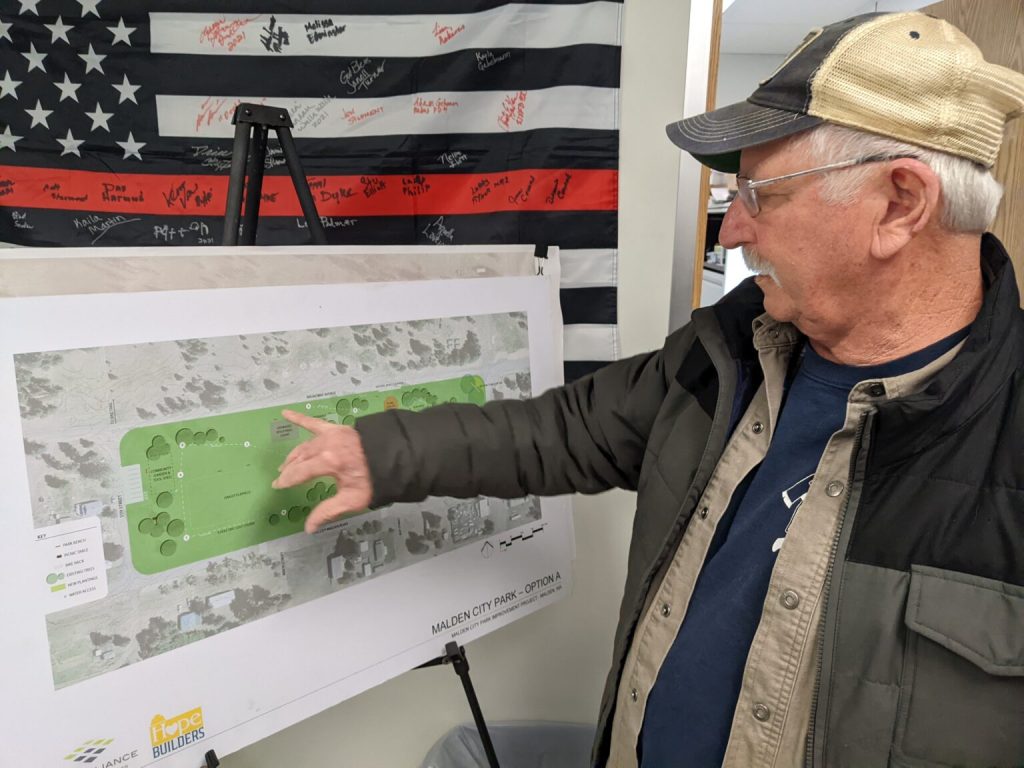 Malden Mayor Dan Harwood points to a map of future plans for the town. Photo by Geoff Roth

“The new community building will be here. This will be the town municipal building…,” Mayor Harwood said.

Soon they’ll be getting a Fire Training Center, and a US Post Office. Other grants will allow Malden to expand the city’s water system, and give them a better chance to fight fires, Harwood says.

In preparation for the upcoming fire season, Harwood said he’s working with the Washington Department of Natural Resources and other government agencies to plan for the possibility of future fires.

“Here’s our little park. We’ve got storage for, we’ve got a tool shed with tools that are donated…”

Harwood and I took a ride down Malden’s main street to survey the damage and recovery efforts.

“But on the other end of town, there’s nothing left on that. So, this house was beautiful. Gone. Gone, gone, gone.”

We pull up to one of the new houses built by the missionaries to meet veteran Mark Butler, who will be moving in soon. Like many residents, he returned after the fire to find his house gone.

“There was, there was not even nothing,” Butler said.  Normal burned out house, you can see where the house was. This was a pile of ash.”

We stand on hardwood floors in Butler’s new two bedroom house where his old house once stood. Appliances have already been installed.

“This house is a godsend from the whole community. It’s not just the people who are running swinging hammers, but the people who contributed the funds to make it possible.”

Mayor Harwood says Malden residents have been able to raise money for recovery efforts from donations at pinecreekcommunityrestoration.org.

Harwood says they’ve cut down damaged and burned trees, built the new homes with metal roofs and siding to resist fire, and are putting gravel around each residence to keep possible flames at bay.

Overall, Mayor Harwood says he’s proud of the progress Malden has made.

“If I had a message for people it’s, don’t forget us. We may not be in the media all the time, but we’re coming back.”

And to anyone curious to see the progress with their own eyes, Harwood said he welcomes folks to visit anytime.