Marilyn Beckett: Malden remains ‘the center of our heartbeat’ 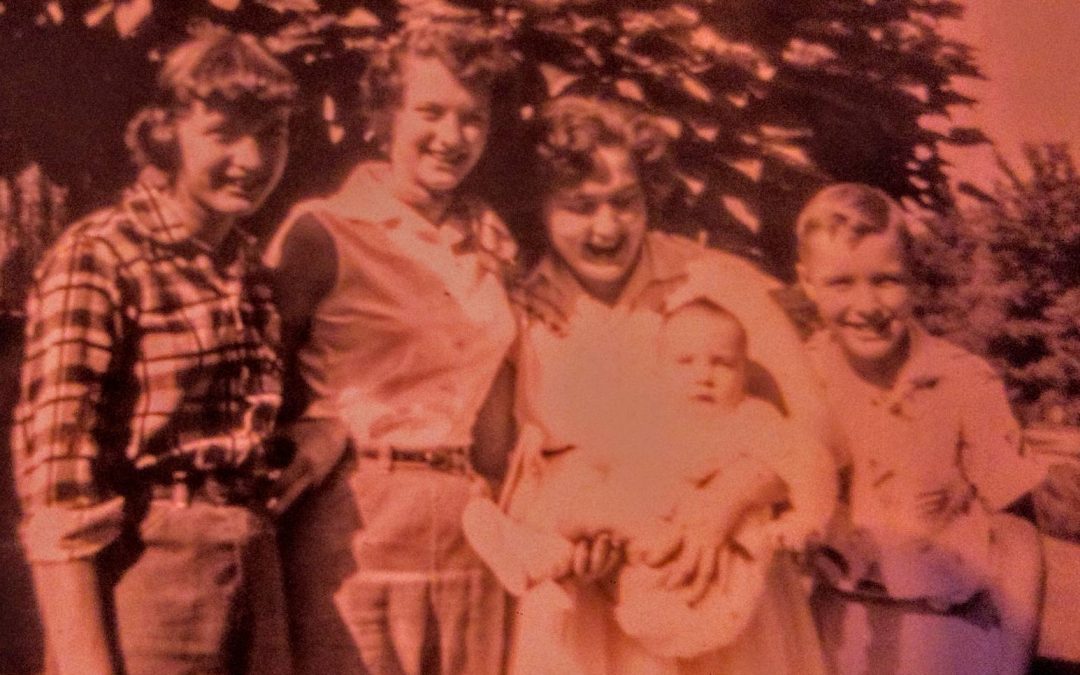 This story first appeared in The Spokesman Review on December 31, 2020. Written by Marilyn Beckett.

After this year’s Labor Day wildfire destroyed Malden, Washington, Gov. Jay Inslee used the phrase “the center of our heartbeat” to describe the tiny town. It’s where I grew up – a place rich in cultural, geological and family history.

Malden is on the cusp of the rich Palouse Loess farmlands and the historic Missoula Flood Scablands. It was comprised of only a few small farms until named in 1909 by the Chicago, Milwaukee, and St. Paul Railroad as their headquarters for the region. The Milwaukee built a state-of-the-art, eight-engine turntable roundhouse, one of the largest in the country, to support the boom of passenger travel and agricultural freight during the development of the West. 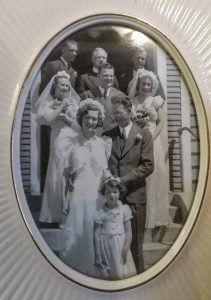 Marilyn’s parents, Marguerite Alice Green and Mark Anthony Buergel, were married at Malden’s Catholic Church in 1938. At top right is the bride’s brother, James Green, who was head engineer on the Coulee Dam project.

My mother was born there as the population peaked near 2,000 circa 1920 in what is one of the smallest municipal boundaries in Washington. The invention of the automobile and onset of the Great Depression eroded the need for passenger rail. By 1940 the town’s population shrunk to a few hundred. Freight rail survived until the Milwaukee’s early splendor died in bankruptcy in the 70s.

When I was a child in the 1960s, the remaining two-classroom brick schoolhouse accommodated fewer than 30 students, grades 1-6. Along with our regular studies, we collected coins and stamps, learned folk songs/dances, astronomy at night (my first deep look at the night sky with our teacher’s telescope), and were encouraged in our individual interests. Every morning two students would unfold and raise the American flag on the school grounds, retrieving and refolding it appropriately at the end of each day.

The flag was stored in the library, where I was greeted by the class pictures of my mother and her siblings, graduates of an earlier Malden High School. Through the glass wall of the library, I could see the auditorium full of ping-pong tables where we practiced for tournaments with neighboring small schools like Hooper. The tables were moved out of the way when we invited the community to our music performances and plays. The large playground in the pines had superior equipment, the greatest being the “Giant Stride” maypole, riders’ individual chains flying feet off the ground at a dizzying speed, each of us waiting eagerly for our turn.

My grandfather made his way West from Ohio as a teen “by hoof and by rail” to settle in Rosalia, where he serviced the windmills that powered people’s lives. My father was born and graduated high school in Rosalia. In 1938, my parents were married in Malden in the Catholic Church now nothing but ashen debris. During World 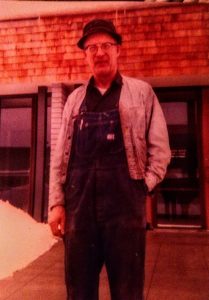 Marilyn’s father, Mark Buergel, worked as a fireman with the Milwaukee Railway and did plumbing jobs on the side. He complained that the railroad ran men ragged and kept them away from home and family. After 25 years, he quit to become a plumber full time. This photo was taken in 1969, outside the bank in Rosalia.

War II, Dad worked as an airplane mechanic at Fairchild Air Force Base. My parents bought the house in Malden owned by my maternal grandfather, apparently once a church turned residence during the railroad’s demise. My mother and her siblings grew up in that house. It is the house where my siblings and I grew up.

I remember watching my Dad finally laying the last of the cinder blocks for the basement he had dug by hand. The house barely survived the wildfire, as well as my family members who live there. Thankfully, no lives in the town were lost.

What was it to be from Malden? We were viewed as failures; something less, even by the neighboring town of Rosalia. But we were a strong tribe – because we were all family born of the railroad era. We worked hard and were determined and resilient. Many of my family and friends ran freight rail when I was young. My first visit across the state line to Idaho, where I live now, was via the Milwaukee depot at St. Maries, when the smell of cedar was thick in the air.

The fire this year destroyed 80% of the town of Malden, but not the memory. This eastern gateway to the Channeled Scablands where the Palouse to Cascades Trail follows the old railbed along Pine Creek is a hauntingly beautiful landscape. An underrated gem, as Inslee realized when he promptly applied for FEMA disaster relief.

It is no surprise the current administration has stalled it, given the clash between the governor and the current president, who reportedly was supported by most Malden residents. But it is wrong to play politics with people’s lives. The community deserves to be remembered and rebuilt in honor of the strength of its history and its people.