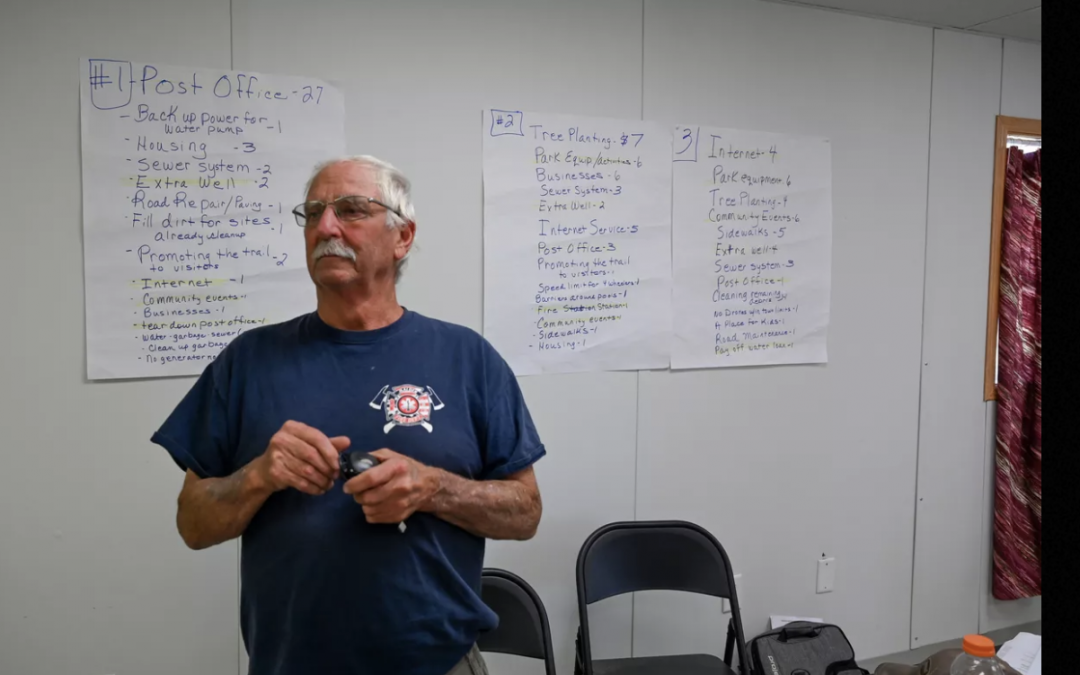 This article first appeared in the Spokesman-Review on September 11, 2021. Article by Emma Epperly, Photos by Jesse Tinsley.

Children play among lush green pine trees as hikers come off the John Wayne Trail to pick up lunch and a U.S. Postal Service truck rumbles by – that’s what leaders in the Malden recovery effort dream a typical summer day will look like a few years down the road.

Residents and leaders alike have big hopes for the burned-out town tucked between the rolling hills of the Palouse.

At the first anniversary of the Babb Road Fire, which claimed 80% of the homes in Malden and Pine City, only a handful of houses have been rebuilt. The real progress was in the planning, said Mayor Dan Harwood.

A series of updates and upgrades are needed for town infrastructure and municipal codes to prevent the town from once again falling into disrepair, Harwood said. The infrastructure upgrades will take time but Harwood hopes it will entice longtime residents and newcomers to build in the area, providing a stable future for the rural town.

Debris from the fire is gone, after a state contractor wrapped up testing and clearing the majority of the land in town. The clean up allowed residents to begin planning their new homes but a few hiccups quickly arose.

Most of the lots in town are too small for modern septic systems. Harwood plans to install a sewer system and upgrade the town’s water system so residents can rebuild.

He plans for the water system upgrade to be completed in the next three years. Phase 1 is set to start this fall.

“That water will give us protection,” Harwood said, addressing many residents’ fears of future fires.

Installation of fiber optic cable is also set to begin this fall to provide every lot in town with high speed internet. Internet access will allow people to enjoy rural life while working from home, Harwood said.

He hopes to have the new sewer system installed in the next few years, which would allow more families to build on the smaller lots that were zoned in the early 1900s. Harwood also expects to have the town hall and fire station rebuilt into a public service building using the town’s insurance payout and a $900,000 award from the Washington State Department of Commerce.

The Postal Service has promised to open again after the town’s historic post office burned, Harwood said. He and Scott Hokonson, director of the Pine Creek Long Term Recovery Group, plan to have the community center built as well with an anonymous $400,000 donation to the group and grant funding.

The community building would host things like square dancing and club meetings, and could be rented for events like baby showers or weddings. It also could become a permanent home for the town’s food bank and library.

“Those things that bring a town together to make us who we are will be here,” Harwood said.

Up the street from the community center, a park designed by kids from the Spangle Pathfinders and Adventurers program, a Christian group similar to the Scouts, will be the perfect place for families to spend the afternoon.

The group toured Malden shortly after the fire and has continued to do community service in town, such as helping remove burned-out trees and handing out gift bags to residents. Scott Rivas has been a Pathfinders leader for the last three years, but his day job is at the engineering firm SCJ Alliance. Rivas and some co-workers donated their time to help design two park options with input from the kids in the group.

The kids have the best ideas because of the way they think, Rivas said. Pathfinder Sam Cromwell, 12, said he enjoys working on the park plans because it’s helping a community “regrow.”

“It kind of gives a foundation for a reason to come and rebuild Malden,” Cromwell said.

Grants from the Department of Commerce and the Center for Disaster Philanthropy will help with the project.

The town is collecting feedback on the design options that include features like a gazebo with plaques showing the history of the town, a baseball diamond, basketball court, and playground equipment.

“I see Malden being greener, more resilient, more inclusive and more communal and friendly,” said Hokonson of his hopes for the town.

Grant-writing help from a team at Catholic Charities is set to work on a slew of applications over the next five years in hopes of funding community projects, Hokonson said. He wants to create a business incubator that would encourage entrepreneurship in Malden residents and hopefully bring a business or two into town. The housing market in Washington is tight right now with new properties snatched off the market as quickly as they’re listed.

Only a 30-minute drive from Spokane, Malden could become a bedroom community for the city, providing affordable starter homes for young families, Hokonson said. He doesn’t expect Malden to see significant growth but reaching a 1,000 residents would assure the town’s future, he said.

Hokonson and Harwood’s dreams of the future depend on a myriad of factors including the results of the 2021 election. Harwood is running to keep his seat as mayor and Hokonson is on the ballot for a town council position.

Their opponents, along with other candidates, said at a candidate forum in July they want Malden to return to the way it was before the fire and remain a small rural community.

The pair also acknowledge they can’t determine the direction of the town alone, residents have to buy in and help shape the area to keep a large enough tax base to maintain the municipal upgrades new residents will need to move into the area.

Despite the trials of navigating bureaucracy, both Hokonson and Harwood dream of having a thriving little town with a restaurant or a coffee shop and plenty of affordable housing.

“Why not make it a marquee place?” Hokonson said. “To show what can happen when people partner together, even during the worst of times?”