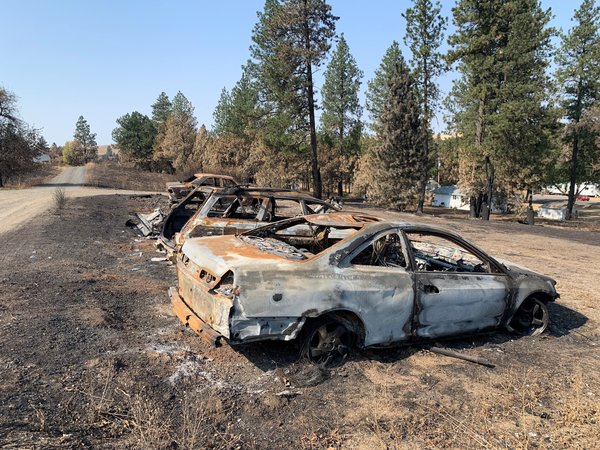 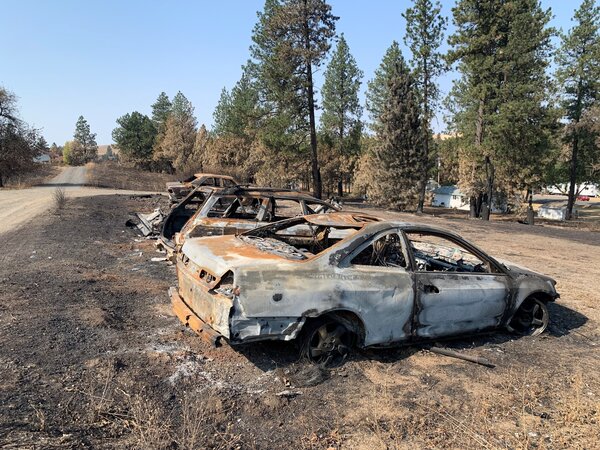 Burned cars from a wildfire that destroyed most of the eastern Washington town of Malden on Labor Day.

When historic wildfires overwhelmed the West Coast in September, the governors of California, Oregon and Washington followed standard protocol and asked President Trump to declare a major disaster.

That frees up millions in federal aid for everything from temporary housing, to clean up, to rebuilding infrastructure.

After some politicking and tweeting — these are blue states, after all — California and Oregon’s major disaster declarations were mostly quickly approved. But it’s now been 71 days since Washington Gov. Jay Inslee petitioned the president, and there’s been no response, not even a denial.

“Oregon heard nine days after the fire and their fire was on the same day as ours, Sept. 7, 2020,” says Scott Hokonson, a town councilman in the tiny eastern Washington farming town of Malden.

Although September’s wildfires were worse overall in California and Oregon, the wind driven range fire destroyed approximately 80% of homes in Malden on Labor Day, including Hokonson’s. Thankfully, nobody died in Malden. But most of its 300-some residents were uninsured and already living on the economic margins.

“To see on the news, reports that you know, the FEMA trailers are rolling in to help some people, when we’re in exactly the same condition, it just makes you wonder, did we get forgotten?” Hokonson says.

Fire survivors are left only to speculate – is this politics, bureaucracy, plain old incompetence? In a brief email, a FEMA spokesperson told NPR only that the administration is still reviewing Washington’s request.

Waiting this long and not even getting denied aid is extremely unusual, says Carolyn Kousky, executive director at the University of Pennsylvania’s Wharton Risk Center.

“Delays create a lot of extra cost for families, for the community and the longer it takes, the more those costs can ripple and create problems,” Kousky says.

In Malden, this amounts to problems like delays in getting people into basic, temporary housing or even just finishing cleaning up the town. The longer things are in limbo, Kousky says, the harder it gets to try to rebuild smarter, and more resilient against the next seemingly inevitable wildfire.

“We are hampered in how much we can move forward and which direction we can go until we hear from FEMA,” says Hokonson, the town councilman.

Hokonson is now leading the area’s recovery task force – its chair recently stepped down. The mayor and city clerk have also reportedly resigned. With so much in limbo, there are legitimate fears Malden will empty out.

As he still hopes to rebuild and keep his family there, Hokonson is trying to stay upbeat about the future of the old historic railroad town, even with so much going against its recovery in the midst of an economic crisis and global pandemic.

“I chuckle because it’s gotten to the point where, it’s just, you have to laugh or else you’ll cry,” he says.